Opinion: The election was a mess of the Ontario Liberals' own making. Here's what happens next—and why a huge loss might actually be a good thing for the party 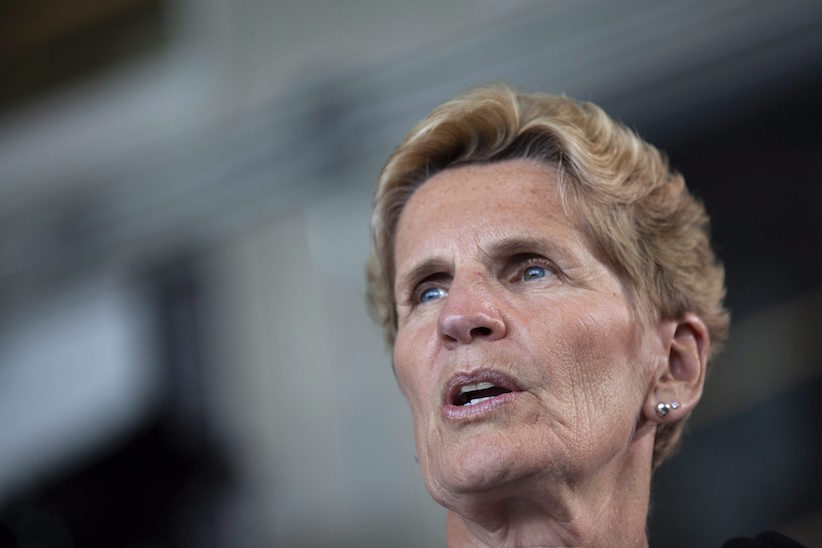 Ontario Liberal Party Leader Kathleen Wynne makes an announcement at the University of Waterloo during a campaign stop in Waterloo, Ont., on Friday, June 1, 2018. (Andrew Ryan/CP)

Gabe De Roche is a former advisor to Ontario Liberal cabinet ministers. He is currently an account director and consultant on corporate reputation with Hill+Knowlton Strategies in Toronto. The views expressed in this article are the personal opinions of the author.

On Saturday morning, five days before the Ontario election, Premier Kathleen Wynne made an extraordinary gamble.

In front of assembled journalists and a group of well-behaved children playing on a jungle gym behind her, Wynne conceded that come Jun. 7, she would no longer be premier, and the Liberals would not form government.

READ MORE: What happens if Kathleen Wynne and the Liberals lose their ‘recognized party’ status?

Though that may have been obvious to anyone who has seen a single poll from throughout this campaign—if not months before—it was nonetheless a shocking admission. Publicly conceding defeat going into the true homestretch of a campaign is an unprecedented move by a head of government running for re-election. Politicians will typically do anything to maintain some modicum of positive momentum, and here was the incumbent premier of the province announcing the complete opposite. Even floundering NDP leaders in the past have insisted they were in it to win it.

For the Ontario Liberals, it marked the effective—and unconventional—end of a campaign full of annihilated expectations that have forced them to be on the back foot from the election’s very beginning. But how exactly did the Liberals, the party that’s been in power for 15 years, get to a point where polls suggest historic lows of less than 20 per cent support? And where does it go from here?

It all started with Doug Ford’s surprise victory in the Progressive Conservative leadership race to replace ex-leader Patrick Brown. Since at least 2016, the Liberals had been building a strategy that took aim at Brown’s moderate but uncharismatic platform, prompting the government to tack aggressively to the left, hiking spending on new social programs. The electoral strategy seemed designed to replicate what had been successful in the 2014 election: attract progressives in the seat-rich 416 and 905 who might otherwise vote NDP, creating a clear left vs. right choice at the ballot box. Even though voters were in the mood for change, the Liberals’ central hope had been to box out the NDP and put themselves forward once again as the only viable progressive option.

But when Ford won the leadership race, the PC campaign became anything but moderate and uncharismatic. Ford’s bombastic and unconventional style turned this election into a personality contest—one that Wynne was ill-equipped to win, with her intense personal unpopularity.

READ MORE: Was Kathleen Wynne’s concession a power move or a desperate act?

Faced with a new and unconventional opponent, the Liberals shifted to make the election’s ballot question into a referendum on Doug Ford rather than one on Wynne. To some degree, they were effective in those efforts, buoyed by a series of significant wins by the Liberal campaign’s war room, including releases of secret recordings of Ford promising to sell off parcels of protected Greenbelt land and offering to pay for party membership fees to help his chosen candidate win a nomination contest, contrary to the party’s rules. With those revelations, Ford’s negatives rose; his popular vote projections fell below 40 per cent.

Still, the Liberals struggled to reverse their declining electoral fortunes. Sensing an opportunity in the third provincial leaders’ debate to exploit a side-by-side comparison of the leadership qualities of Ford and Wynne, the Liberals launched a bold and risky ad: #SorryNotSorry. In it, the premier looked straight into the camera while her own voiceover said she was sorry that people don’t like her. Then she began to smile, and the voiceover defiantly affirmed that she is not sorry for her record.

READ MORE: With #SorryNotSorry, what is Wynne really saying? 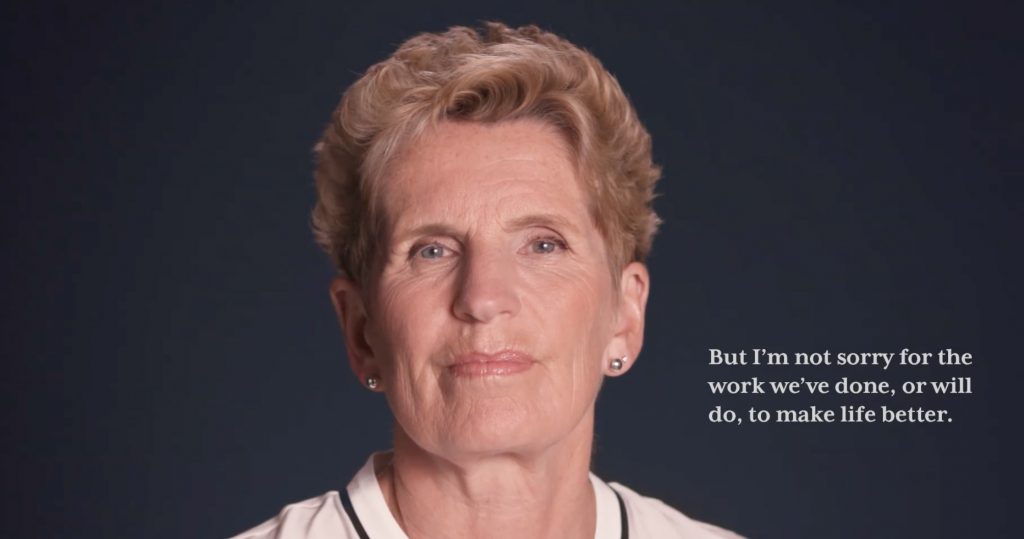 The ad was clearly aimed at soft Liberal supporters who had voted for the premier in the past and who, it was thought, just needed to be reminded why they had put their trust in her four years ago. By acknowledging that she is unpopular, she sought sympathy. By citing the most popular parts of her record, she sought a contrast with Ford. By appearing in a dramatically lit close-up, intoning the hashtag-ready phrase “sorry not sorry,” she sought social-media shares.

Well, at least she got the social-media shares. The risky ad offered little return. And former Liberal supporters continued moving to the NDP in droves to do what the premier and the Liberal campaign had been imploring them to do for weeks and weeks: stop Doug Ford. As Maclean’s reported on Sunday, Andrea Horwath’s NDP are now in a virtual tie with Ford’s PCs in terms of popular support.

The fatal flaw of the Liberal strategy—adopting policies more typical of the NDP, setting up a left-vs-right ballot-box choice, and then making the campaign about stopping Ford—was a miscalculation on who voters would select as the best alternative to Ford. Desperately seeking change, voters identified Horwath, unburdened by deep unpopularity, as their choice for a progressive leader.

Not that the Liberals are going down quietly. Wynne’s concession that she will lose the election on Jun. 7 was coupled with a plea to voters, heavy with pathos, that they should no longer fear voting Liberal at the risk of re-electing a premier they dislike. Instead, she said, they should vote enthusiastically for their local Liberal candidates in order to avoid a majority government from either Doug Ford or NDP—here, the premier avoided using the name of the more popular Horwath—an outcome that she characterized as being akin to giving those parties a “blank cheque.”

The premier’s unprecedented concession will likely make little difference in the campaign’s outcome. For every potential Liberal voter newly won over because the prospect of re-electing Kathleen Wynne had given them reason to pause when it came to supporting the party—and take note, that is the convoluted scenario Wynne’s strategy is banking on—there are surely Liberal-leaning progressives who will abandon the party for the NDP. Strategic voting has become a part of the Canadian electorate’s mentality, and voters have no interest in backing a loser.

The Liberal campaign, however, is clearly confident the concession announcement will help shore up some seats that are at risk. The premier’s press conference has been bolstered with a new TV ad that reportedly aired during high-profile time slots during the Stanley Cup playoffs and Saturday Night Live. These TV ad buys do not come cheap, and Liberal partisans should question the expensive airtime for these ads when surely these funds will be needed to support the party’s rebuilding after this disastrous election.

On the other hand, some might argue that the expense is justified from a strict “return-on-investment” standpoint if it helps significantly increase the party’s popular vote totals, thereby yielding more money after the election through the government’s new per-vote subsidies—of $2.71 per vote received—which the premier introduced when her government banned corporate and union donations in 2016. That bet is so far from certain that it should be dismissed and decried as an irresponsible gamble with the party’s future—and not just because Ford has vowed to cancel these subsidies if elected. 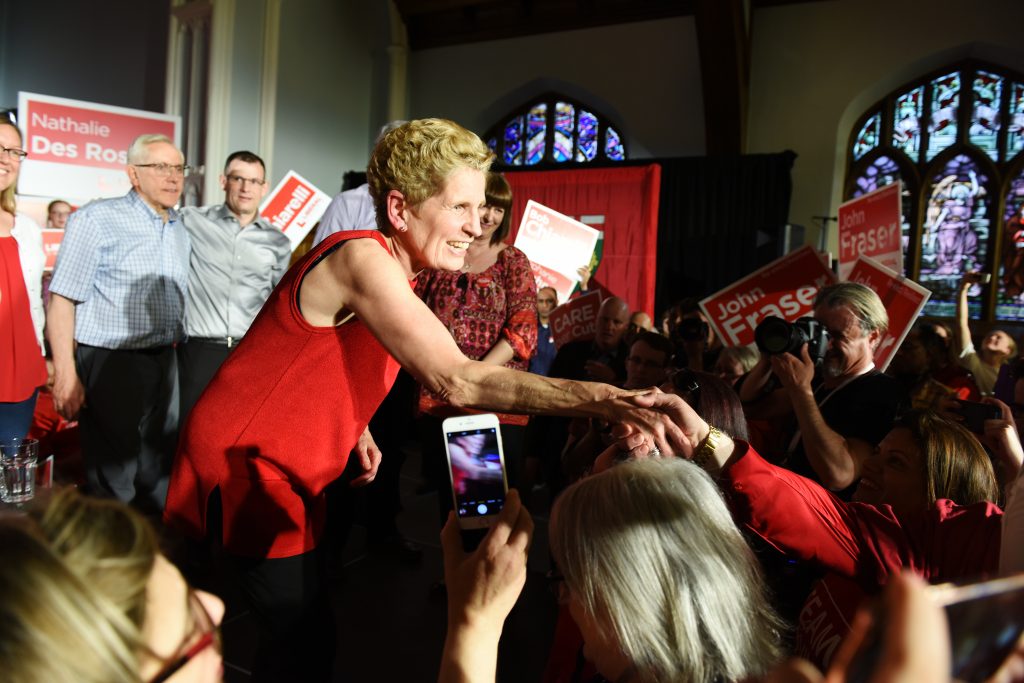 Either way, the Liberal re-building process will be difficult. Having intentionally pushed the electorate into a left vs. right choice when they thought it would benefit them, the main challenge of the Ontario Liberal Party’s new leadership will be to make the case for the continued need for, and viability of, a strong party of the political centre in Ontario.

After 15 years in power, it’s time for a new generation of Liberal activists to take on a leadership role in the party’s rebuilding and lead it out of a wilderness of its own creation. And this generation is eager to set a new course—including many who have been on the outside in the waning years of Wynne’s premiership.

Though the party’s financial situation will be a serious burden not easily overcome, and any obvious leadership succession plans will be disrupted by what is sure to be a rout in its number of elected MPPs, voters in this election will have at least achieved their desire for “change” in effectively requiring the Ontario Liberal Party to rebuild with barely a foundation.

But even though the party has worked over the past several years to eliminate the political centre as a primary feature of its electoral strategy, there is room in Ontario for a truly centrist party. There are cases where democracies have bucked the trend of an electorate split in two, where new centrist parties have found success. France’s Emmanuel Macron, for instance, built a new centrist political party from the ruins of that country’s disgraced and deeply unpopular centre-left government—sound familiar?—taking on a conservative party deeply out of touch with a new generation that had no love for an entrenched political establishment, nor for a rabid far-right promoting a nativism ill-suited to a world that’s more open than ever before.

Ontario is not France, of course. But the Liberals’ dire position after this election provides an opportunity for, and even necessitates, a concentrated effort on building a new voting coalition for the future, rather than just taking the NDP’s. From the embers of the old party can come novel policy priorities and new leadership both at the head of the party and around its decision-making table.

It may not feel like it now, but the necessary condition for this reimagined centrist force to emerge—for the older generation to clear the path for the younger—may not be a minor defeat where the party could simply shuffle the deck chairs, but a true trouncing. There is opportunity, after all, in creative destruction.