There is no precedent—a president sides with America’s enemies

Scott Gilmore: After Helsinki, America is in unchartered waters, facing the possibility that its president is no longer defending America 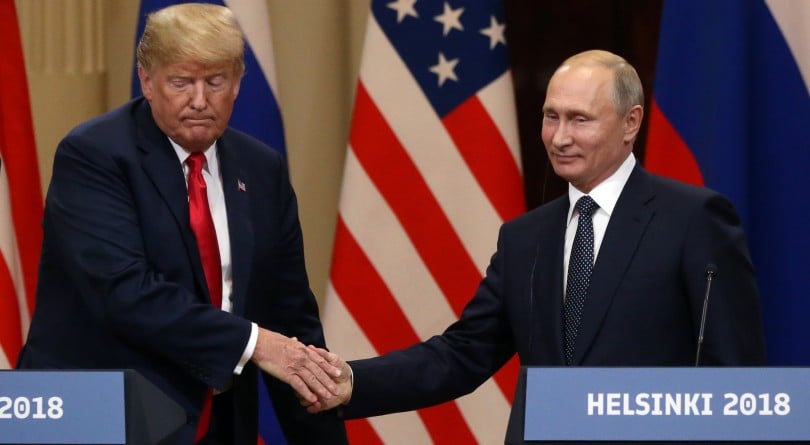 A president with no precedent: Scott Gilmore on The Big Story

Today was arguably one of the most stunning and disgraceful moments in the history of the American presidency. Clinton had sex with an intern. Nixon covered up Watergate. Kennedy invaded Cuba. But none of them stood in front of the world and publicly sided with America’s greatest rival over his staff, his intelligence agencies, his government and his country.

We have been heading towards this moment for a long time. After his first trip to Moscow in the 1980s, Donald Trump took out a full-page ad attacking America’s Russia policy. During the nomination race and election campaign, Trump carefully avoided any criticism of Russian President Vladimir Putin. Once in office, he repeatedly contradicted his own intelligence agencies and claimed Russia never interfered in the election. As this summit in Helsinki, Finland, approached, everyone expected Trump to court Putin, to praise him, to avoid any conflict.

READ MORE: Time for a moratorium on summits: The Trump Pause?

Nonetheless, watching it unfold live was shocking. It began with Putin arriving 45 minutes late—a crude but clear attempt to assert dominance. Then they sat together in front of the camera. Trump looked nervous, sitting on the edge of his chair with a forced smile. Putin was leaning back in his chair, legs sprawled out. He looked bored. He looked like he was in charge.

The two then disappeared into a private meeting, without advisor or note-takers. This was an unprecedented deviation from normal protocol, and one that was stunning given the increasingly voluble accusations that the president has been compromised by Russia in some way.

We may never know what happened in that meeting, but we will never forget what happened when they re-emerged. The two gave a short press conference, and Trump looked into the cameras and chose sides. He avoided any mention of the invasion of Crimea, of the destruction of MH17, of the nerve agent attack in the United Kingdom.

RELATED: Russia is a mess, but it’s still playing the West

Instead, he defended Russia’s right to compete in Europe’s natural gas market. He argued that America shared responsibility for the decline in bilateral relations. He said the United States had been foolish. He stood silently as Putin lectured him on democracy. Trump announced that relations between Moscow and Washington had reached a new high point.

Then, Associated Press journalist Jonathan Lemire stood up and pointed out that while Putin claims Russia never attacked the American election, every U.S. intelligence agency has concluded they did. He asked, “Who do you believe?… And would you now, with the whole world watching, tell President Putin, would you denounce what happened in 2016 and would you warn him to never do it again?”

It was a moment that will define the Trump presidency. As the question unfolded, Trump straightened his back and leaned away from the microphone. He glanced at the ceiling. He answered by first attacking the FBI’s role in investigating Hillary Clinton’s emails. Then he added [Putin] “just said it’s not Russia. I will say this: I don’t see any reason why it would be….President Putin was extremely strong and powerful in his denial today.” He then concluded by praising Putin’s offer to help him get to the bottom of it.

Three days after the FBI issued indictments showing the military of a foreign power attacked America, the president of the United States stood with the attacker and defended him.

READ MORE: Welcome to a world no longer led by Moscow and Washington

There are no analogous moments. When Prime Minister Neville Chamberlain infamously announced his policy of appeasement, he did not defend Germany’s actions nor simultaneously attack his own government. There has been no moment in history where the president has sided with an aggressive rival power over the interests of his own nation.

America is in uncharted waters. Republican lawmakers are unable to either explain or defend what happened in Helsinki. A former CIA director is calling it treason. News anchors are abandoning any attempt at dispassionate analysis and calling it “shocking” and “disgraceful.” Calls for impeachment are everywhere. But the United States has never had to face the possibility that for reasons unknown, its president has been compromised and is no longer defending America.

And we, too, are in uncharted waters. As the summit was unfolding, the German foreign minister stated that Europe cannot rely on the White House. After his attempts to destabilize NATO, after his attacks on U.K. Prime Minister Theresa May, after Helsinki, American allies must concede that as bad as we expected Trump to be, we did not expect this. We have never been faced with a situation like this, and we have no idea where history goes from here.