Anne Kingston: Days after the swearing-in of the federal cabinet (and after volumes of analysis), telling details from the day itself remain overlooked 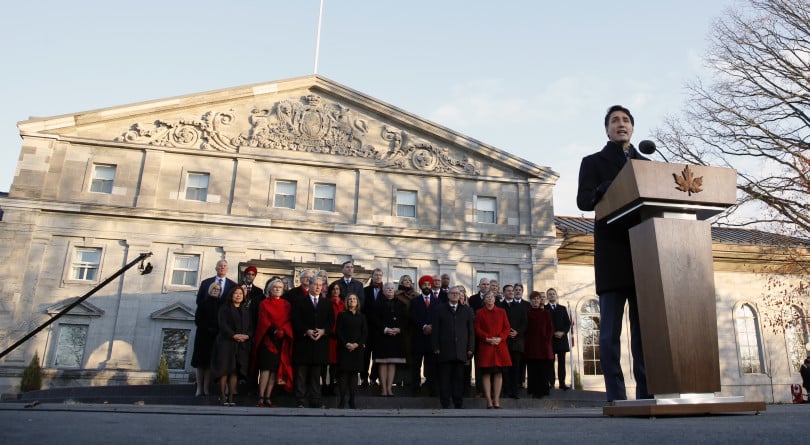 Justin Trudeau speaks at a news conference following a swearing in ceremony for the new liberal minority government at Rideau Hall in Ottawa, Ontario, Canada, on Nov. 20, 2019. (David Kawai/Bloomberg via Getty Images)

Days after the swearing-in of the federal cabinet (and after volumes of analysis), telling details from the day itself remain overlooked. From who hugged whom to vanishing ministries, here’s a look at political signals that speak volumes and hint at what’s to come.

The takeaway pic: If 2015 was Sunny Ways,  2019 is Overcast Loyalty.  In 2015, a photo of Justin Trudeau and his wife Sophie Grégoire Trudeau walking in sunshine, leading his majority Liberal government en masse to a swearing-in at Rideau Hall was filled with light colours and fresh hope. The mood was euphoric. Sunny ways! Indigenous reconciliation! Electoral reform! The tableaux memorably echoed a historic photo of Pierre Elliott Trudeau decades earlier walking to Rideau Hall with cabinet ministers. Earlier this week, we saw similar staging of the new minority government cabinet, only with Chrystia Freeland striding confidently centre-front, and an apparent red-and-black dress code in effect. The red was “Liberal” branding. As for the black? Gravity? Loyalty?  It was unclear.

Creation of the Chrystia conundrum. Exactly what Trudeau is signalling in his appointment of former Minister of Foreign Affairs Chrystia Freeland as deputy prime minister and minister of intergovernmental affairs tasked with repairing Western alienation has become a national litmus test. Is it a major promotion? Or has Freeland been sidelined with an impossible mission destined to fail? Freeland’s full plate includes continuing responsibility for the new NAFTA, a continuing “oversight” role at Foreign Affairs, and chairing the economy and energy cabinet committee which is responsible for making key decisions on the West, climate policy, and growth.

The one certainty is that that every reference to Freeland henceforth will include “Peace River, Alta-born” before her name to convey her bona fides for the assignment. That’s in direct contrast to the billing Freeland was given when she arrived on the political scene: then many swooned about her Oxford University education, her ties to the Davos elite and friendships with Larry Summers and David Thomson.

“Because it’s 2019.” Trudeau kept a gender-balanced cabinet with 18 women and 18 men. Traditional power portfolios like finance, defence, and justice remained held by men, with the addition of a male foreign affairs minister. The spanner is Freeland, whose role as deputy PM indicates significant power as Trudeau’s proxy. But history also indicates that being deputy PM, a title created by Pierre Elliott Trudeau in 1977 to recognize his long-serving minister Allan MacEachen, isn’t a route to the top.

The awkward, almost handshake. An expert in kinesics would have been useful to interpret the microscopic chill evident when Catherine McKenna, the former high profile minister of the environment and climate change, approached Trudeau after taking the oath as the new minister of infrastructure and communities. McKenna, the target of vile sexist attacks when in her last portfolio, offered the PM an outstretched hand for a handshake; Trudeau ignored it and went in for a hug, a brief one.

An unanswered question: Why was Steven Guilbeault, an accomplished, high-profile environmentalist from Quebec  passed over for the ministry of environment and climate change? Instead Trudeau appointed Jonathan Wilkinson, former minister of fisheries, oceans and the national coast guard, who is unlikely to be targeted with misogynist hate on Twitter. Guilbeault was appointed Minister of Canadian Heritage.

Vanishing ministries.  The tethering of ministry creation (and deletion) to the Trudeau government’s political agenda was on display. Gone is Science and Sport, a portfolio formerly held by Kirsty Duncan, a scientist and former academic. The Liberals stated commitment to science and scientific research was a pillar of their 2015 electoral message and a clear rebuke of the Harper government’s brutal closure of fisheries, libraries, research labs and muzzling of scientists. Science still warrants cabinet mention—it’s ranked second in the ministry of Innovation, Science and Industry, presided over by Navdeep Bains (scientists would argue that the science comes first, the innovation second). Duncan, who merited the longest hug (12 seconds) in 2015 when appointed, is no longer in the cabinet. Also wiped from the cabinet slate is the Democratic Institutions ministry, which oversaw the failed electoral reform process.

Another Orwellian whiff. That came via the risibly named “Middle Class Prosperity” portfolio, to be managed by Ottawa-Vanier MP Mona Fortier, also Associate Minister of Finance. Concern for “the middle class and those wanting to join it” is a Trudeau mantra—one that deflects from his own privilege and wealth. Creating such a portfolio imparts the message that “middle class prosperity” is as real as “natural resources” or “finance.” Already, it has put the spotlight on the vagaries of the term “middle class.” Fortier herself was unable to define it on CBC’s The Current on Friday, offering only “where [people]  can afford their way of life…and send their kids to play hockey…” The title also obfuscates the deepening income gap, and the fact that, while poverty rates are falling, one in seven Canadians live in poverty. “Raising Canadians from Abject Poverty” just doesn’t have the same ring.

The ghosts.  The sense of history-in-the-making evident in 2015 with the appointment of  Jody Wilson-Raybould as the first Indigenous woman to be Minister of Justice and the Attorney General of Canada was not only absent but cast in shadow as  David Lametti was reinstated to justice and as attorney general, the role he took on during the SNC-Lavalin mess. Another shadow: Mark Miller, a long-time Trudeau friend who was named  Minister of Indigenous Services, a portfolio Wilson-Raybould rejected before being ejected from the Liberal caucus. Miller’s friendship with Trudeau has come under scrutiny in the past with allegations of  favourtism. The new minister also has ties to Trudeau’s ignominious blackface history, having been present at one of Trudeau’s performances when they both attended Montreal’s Collège Jean-de-Brébeuf. He has since expressed  contrition: “I was sixteen years old, if anything I was guilty of silence, which I think a lot of us are.”

The mask removed. Dominic LeBlanc, who is recovering from cancer treatment, arrived at Rideau Hall in a blue surgical mask, a conspicuous reminder of his continuing vulnerability to infection. The New Brunswick MP removed the mask briefly to be appointed President of the Queen’s Privy Council of Canada; he received a rousing, supportive standing ovation. On a day filled with signals and political semantics it was a rare, welcome humane moment.