Philippe J. Fournier: A flurry of new polls are out to mark the start of the federal election campaign. They put the Liberals one seat shy of a majority. 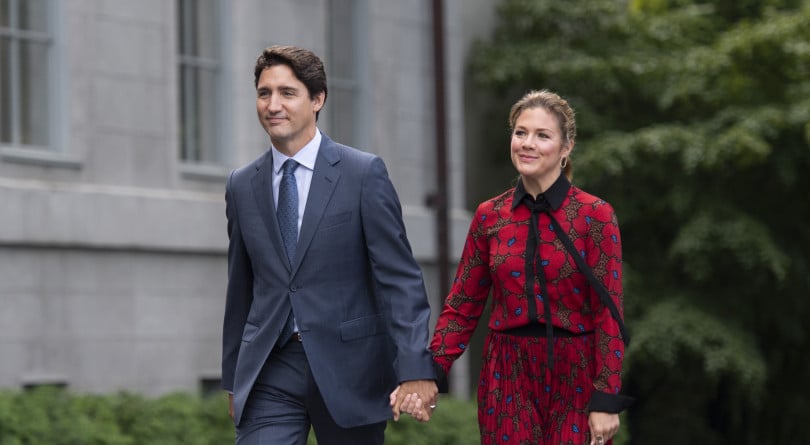 As Justin Trudeau paid a visit to Governor General Julie Payette on Wednesday, a flurry of new polls were released throughout the day—enough to warrant a full updated projection of the race at the starting line. Here is a short recap:

We also add to the 338Canada projection the latest Léger/The Canadian Press poll. Léger’s top line numbers are in line with the recent trends: The Conservatives (35 per cent) are in a virtual tie with the Liberals (34 per cent) on voting intentions. The Greens and NDP are fighting for a distant third place with 11 per cent apiece.

As we have seen with other pollsters lately, Léger’s national and regional numbers do not tell the same story: In Quebec, the Liberals now hold a commanding 15-point lead at 37 per cent. The Conservatives (22 per cent) and the Bloc (21 per cent) are battling for second place. The NDP, after being a force in the province in the past two federal general elections, are polling at a dismal 6 per cent—a level of support that could see the NDP being completely wiped out of Quebec—yes, including the Island of Montreal.

In Ontario, Léger has the Liberals six points ahead of the Conservatives (37 to 31 per cent). Out west, the Conservatives dominate the Prairies by 27 points and Alberta by 46 (!) points. Find the complete Léger report here. 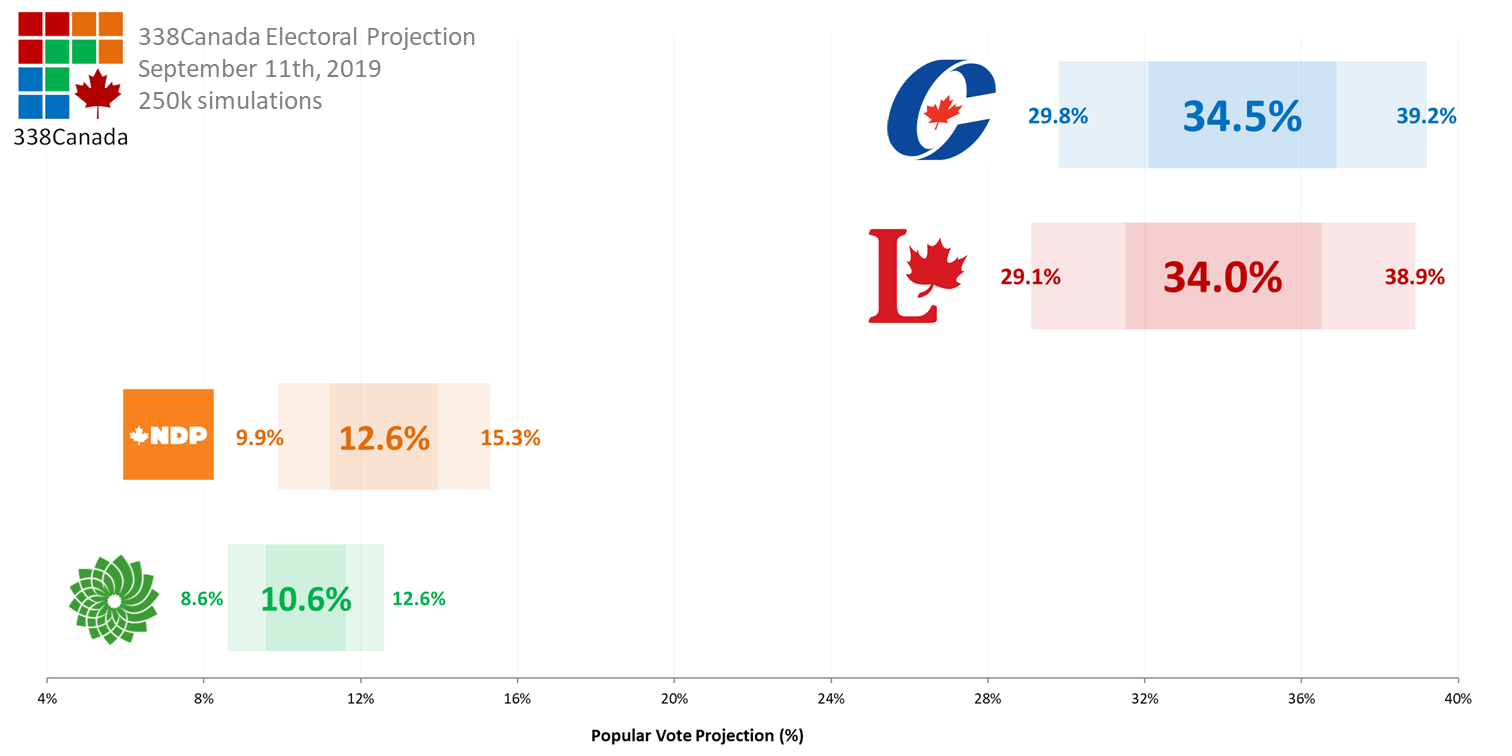 The Conservatives and Liberals remain in a statistical tie with averages of 34.5 and 34 per cent, respectively. Once again, the NDP loses ground to the main parties and slides to 12.6 per cent—the lowest it’s averaged in the 338Canada model since the tracking began last year.

With leads in Atlantic Canada, Quebec and Ontario (and in a near tie in British Columbia), the Liberals lead the seat projections with an average of 169 seats—only one seat short from the majority threshold: 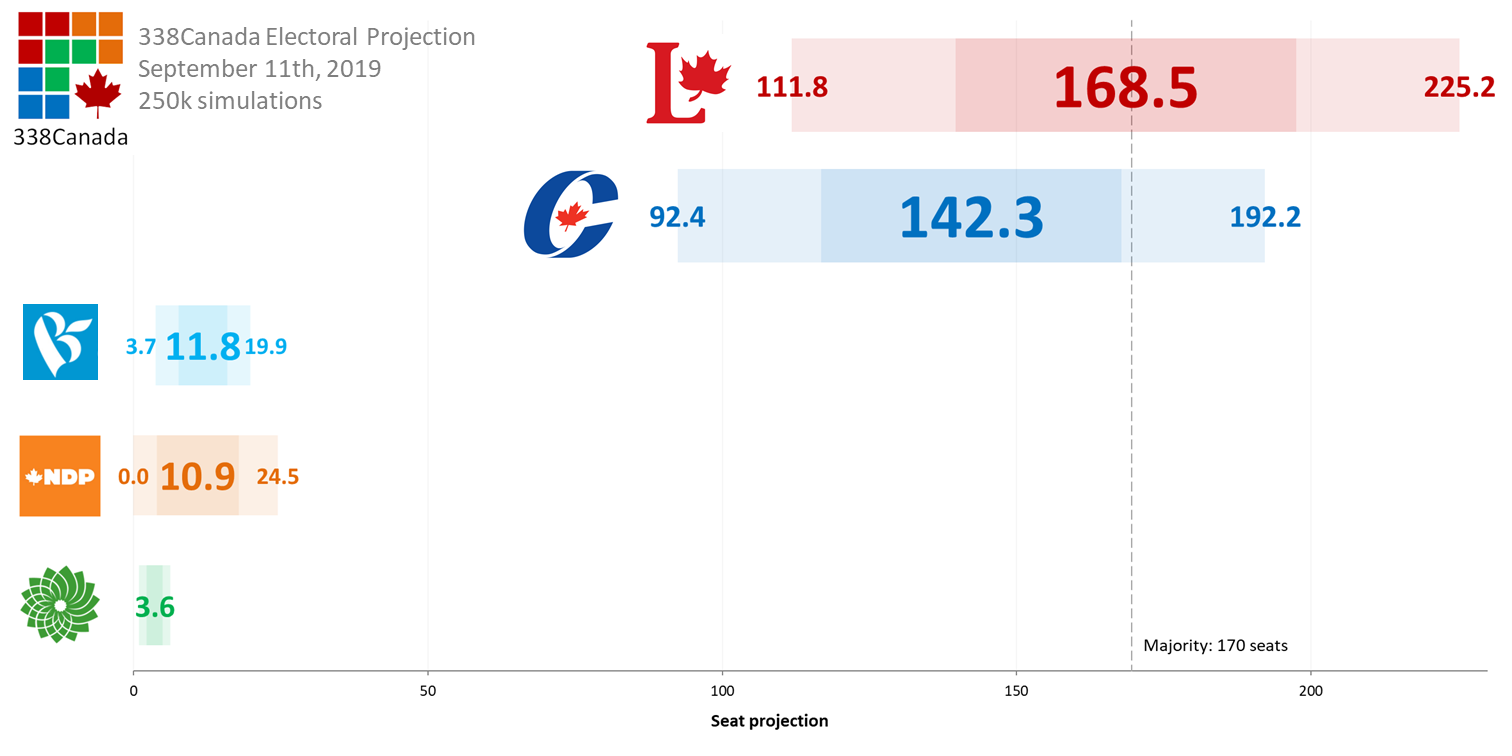 The Conservatives win an average of 142 seats, by (almost) running the table in Alberta, Saskatchewan, rural B.C. and major parts of Central and Southwestern Ontario.

The Bloc québécois takes an average of 12 seats (with 19 per cent in Quebec). The NDP falls to 11 seats and the Greens, 4 seats.

Nevertheless, since there remains so many close races—especially in the suburbs of Montreal and Toronto, as well as parts of the Lower Mainland—the Liberals only win the most seats in 68 per cent of all simulations. As of this writing, the Liberals are barely 2-to-1 favourites to win a plurality of seats at the House of Commons. 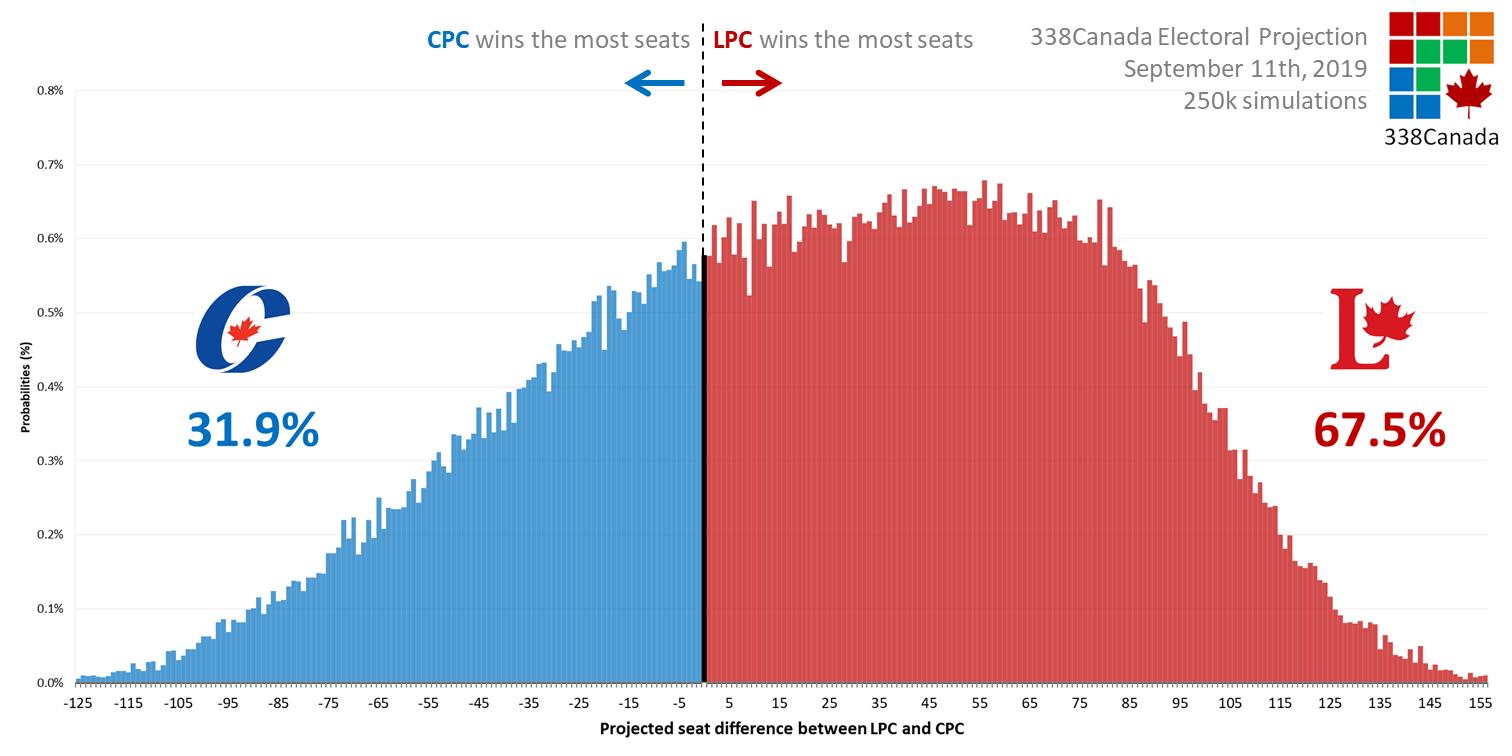 The Conservatives have their work cut out for them: They hold the most safe seats among major parties and dominate two provinces almost entirely. But it is in Eastern Canada that the CPC has to find ways to make gains.

Numbers in Quebec have looked promising in the past months for Andrew Scheer. (Notice that he launched his campaign in the toss up riding of Trois-Rivières?) But his party seems to have peaked too soon in the province. Last spring, Léger measured as much as 30 per cent support in Quebec for the Conservatives—enough to hope for major gains in rural Quebec—but its latest poll has the CPC down to only 22 per cent, tied with the Bloc in the province.

As John Geddes writes in his new Maclean’s article, the Conservatives’ last hopes to win the most seats and defeat Justin Trudeau may lie in the 30 districts of the GTA where both Harper (2011) and Trudeau (2015) fared extremely well in their respective majority victories.

The writ has been dropped/drawn up (or issued, as some scholars have told me was the correct jargon). The 2019 federal campaign has been launched. In the next 40 days, we will follow the numbers to give Canadians an accurate description of their political landscape.