338Canada: Confidence in the Liberals runs high. But for how long?

Philippe Fournier: The Liberals have surged ahead in voting attentions, even as coronavirus cases double every three days and the America problem looms large 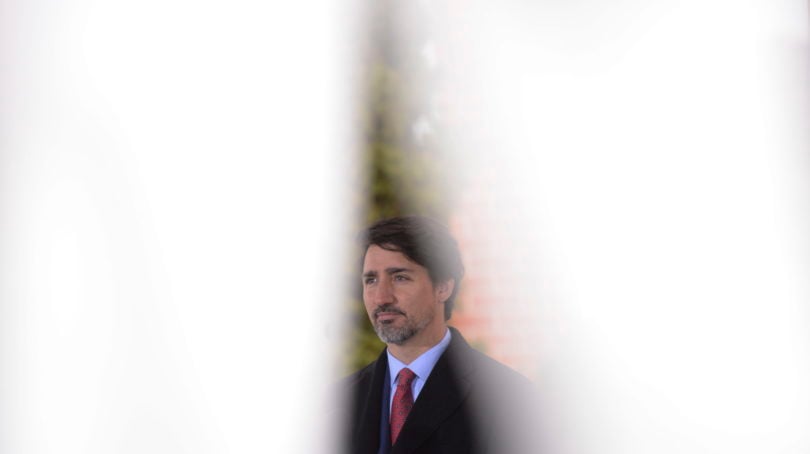 Trudeau addresses Canadians on the COVID-19 pandemic from Rideau Cottage in Ottawa on March 26, 2020 (CP/Sean Kilpatrick)

Several polls were published earlier in the past week in hopes to measure the pulse of Canadians as many nations around the globe are facing increasing adversity with the spread of the coronavirus. Some countries, namely China, South Korea and Japan, appear to have their respective situation under control; others, not least of which the United States, are bracing for impact.

As of this writing, the number of confirmed cases in the United Stated had surpassed 100,000 and the curve appears to follow a steep exponential growth which would increase ten-fold in the span of a week.

EKOS Research Associates released its latest round of numbers on Friday on the impressions of Canadians regarding the government’s response to the current COVID-19 pandemic. According to EKOS’ data, 77 per cent of Canadians consider the epidemic to be more serious than the SARS outbreak of 2003, and 71 per cent even agree that it is more serious than the 9/11 attacks. (Interestingly, there does not seem to be a recency bias concerning the 9/11 attacks since results do not differ much with age groups.)

Moreover, the federal government’s response to the outbreak has widely been well received by Canadians—at least so far. From EKOS’ poll report: “Confidence in the federal government is at 75 per cent, the highest score EKOS has ever recorded.” Justin Trudeau also receives a generally positive approval of his handling of the crisis: 67 per cent of respondents approve of the Prime Minister (an equal fraction of respondents approve of Deputy PM Chrystia Freeland).

Our latest polling from past week . Measures on national and federal direction are the highest we have ever seen . There are so many remarkable features to current public outlook and it is changing daily it seems . https://t.co/tYVQVQSEGa

Several of Canada’s premiers also score above their usual levels among their respective voters according to EKOS, namely Doug Ford (67 per cent), John Horgan (68 per cent) and Jason Kenney (65 per cent). However, no premier in the country is as much appreciated by his constituents as Quebec Premier François Legault, with a stunning 95 per cent (not a typo) approval rating.

Naturally, with growing approval numbers of late, Justin Trudeau’s Liberals have surged ahead in voting intentions. EKOS’ latest numbers put the Liberals at 40 per cent nationally, comfortably in majority territory:

In Quebec, the Bloc québécois has surged ahead in first place with 37 per cent, although the Liberals are still holding their own in the province with 32 per cent. Other polling firms, namely Léger and the Angus Reid Institute, have also recently measured the Bloc on the rise in Québec. In the aggregate, it is safe to conclude that most of the recent BQ gains have come at the expense of the Conservatives in Quebec.

But it is in Ontario where the Liberals have gained the most support according to EKOS. With a decent sample size of 799 in the province (which translates to a margin of error of just below ±4 per cent), the federal Liberals receive the support of 52 per cent of Ontario respondents. The Conservatives fall to a distant second place in the province with 27 per cent. Earlier in the week, the latest Mainstreet Research/iPolitics poll had the Liberals with 51 per cent in Ontario and the Conservatives at 30 per cent, in line with EKOS’ latest numbers.

This rally-around-the-flag effect has been observed in other countries and in other contexts, but the question remains: how long can it last? As of last night, the numbers of confirmed infections in Canada had grown to just over 5,600. Canada’s curve has been following an exponential daily growth of approximately 29 per cent:

Which means the numbers of cases should keep doubling every three days in the short-term. However, the social confinement measures implemented by the federal and provincial governments across the country should, theoretically, bear fruit soon, in which case the curve could start “flattening”. But will Canadians listen? Governments can promote and try to enforce confinement measures as much as they want, but those will have little effect if citizens do not follow them.

Moreover, another major issue which will soon face the federal government will surround its handling of the Canadian-American border. The United States currently has the steepest curve of any country on Earth:

As mentioned above, the United States’ curve is on path to grow 10-fold every week, which means that next Saturday, the numbers of confirmed cases could approach the one million mark. The next week? Ten million.

Therefore, on a purely scientific basis, reopening to border to American tourists and visitors will be unconscionable for many months to come for the Canadian government. With President Donald Trump’s wish to “reopen the country for business” by mid-April, how will the federal government handle this potentially explosive issue?

And how will Canadians react should this crisis last beyond the spring and into the summer?

We shall see. For now, please stay safe, dear readers.