Philippe J. Fournier: Recently vaccinated seniors could be driving up Liberal support over the Tories. Enough of them in key ridings could turn a slim majority into a blowout. 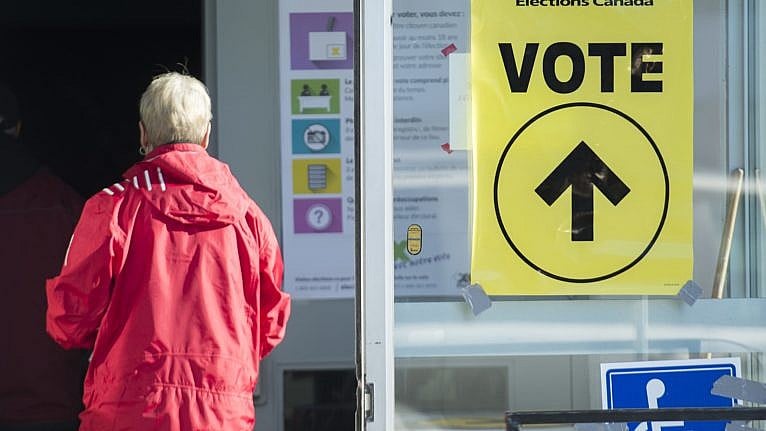 People arrive to cast their ballots at a polling station on federal election day in Shawinigan, Que., on Oct. 21, 2019 (CP/Graham Hughes)

In fact, the Elections Canada estimates show a 25-point gap between the turnout of the 18 to 24 year old and 65 to 74 year old demographics. Had these younger voters cast ballots in similar proportions to their elders in 2019, a little over 400,000 additional ballots would have been cast from coast to coast—roughly as many ballots cast in all of New Brunswick in 2019. Applying the same formula to the 25 to 34 year old demographic, about 900,000 more ballots would have been cast, almost as many as all of Manitoba and Saskatchewan combined, more than enough ballots to swing the election one way or another.

It is thus both a blessing and a curse for any party to poll in higher numbers with younger voters, as the federal NDP often does. As I have mentioned many times before, party support in polls is only theoretical support, and, on election night, only checked ballots in ballot boxes end up counting. Because of their significantly higher turnout, older voters therefore count for more than their share of weight in the final results.

As a general rule, right-of-centre parties often perform well above their general population average among older voters, and the Conservative Party of Canada (CPC) at the federal level is usually no exception. In a Léger poll fielded in January 2020, just weeks before the COVID-19 pandemic began in Canada, the Conservatives and Liberals stood at 32 and 31 per cent, respectively, at the national level. Among older voters (55+), the Conservatives were in first place with 35 per cent, but fell to third place with 23 per cent among younger voters (18-34). These results were similar to the final rounds of polling just before the 2019 election, when the Conservatives won the national popular vote by one point over the Liberals. Back in the fall of 2020, the CPC still routinely came in first place in federal polling among older voters, and generally trailed the Liberals by a handful of points because of lower support from younger demographics.

A flurry of federal polls was released just before and after the federal budget, and the 338Canada projection shows the Liberals slowly widening the gap between themselves and the Conservatives. Regionally, numbers show steady leads for the LPC in Ontario and Atlantic Canada, whereas in Quebec the gap between the Liberals and the Bloc Québécois has been growing in favour of the Liberals of late. As for the CPC, it still leads in the Prairies by wide margins, although its numbers in Alberta are closer to the 50 per cent mark rather than the 69 per cent it won back in 2019.

However, it is not the regional numbers as much as the generational voting intentions that really caught my eye last week.

In the latest Léger/CP tracker poll released in mid-April, the Liberals held first place with 35 per cent of vote intentions among the poll’s entire sample—a notable, but still modest, 5-point lead over the Conservatives. However, among the older voter demographic (aged 55 and over), it was the Liberal Party that lead the Conservatives by a 9-point margin, 40 to 31 per cent:

Could this be an outlier? We naturally must use caution with a poll’s subsamples because of their higher uncertainty, but the unweighted sample of voters in that age group was a respectable 517 respondents, which, with a probabilistic sample, would have yielded a ±4 per cent margin of error in the 95 per cent confidence interval. So, at best for the CPC, it would be tied with the Liberals among older voters; At worse, the Liberals would hold a 15+ point lead.

Other recent polls show similar data. In the latest federal survey from Mainstreet Research (for iPolitics), the national numbers were mostly in line with the current averages, with the Liberals at 37 per cent and the Conservatives at 30 per cent. However, among voters aged 50 and over (total sample of 647), the Liberals jumped to a crushing 15-point lead over the CPC, 44 to 29 per cent:

Here below is a graph of voting intentions for voters 55 years old and over for the LPC and CPC since October according to Léger’s tracker. The dots show the poll data, and the shaded areas are simple rolling averages:

So, this raises the question: Why are older Canadians suddenly keener to support Trudeau’s Liberals than in recent months? As Occam’s razor rule of parsimony wisely states, sometimes the simplest and most obvious explanation is the correct one. From the graph above, it appears that the Liberal Party started distancing itself from the Conservatives in February, which coincided with many senior voters in Canada getting their first jab.

As of this writing, over 79 per cent of Canadians aged 70 to 79 years old and 87 per cent Canadians over 80 years old have received at least a first dose of the vaccine, according to the Public Health agency of Canada. After a slow start to its vaccine rollout in February and March, Canada now has one the fastest vaccination rates in the world, and trails only the United Kingdom and the United States among G7 countries (see graph below).

[Source: Official data collected by Our World in Data.]

The latest 338Canada federal projection has the Liberals at an average of 175 seats, just above the 170-seat threshold for a majority in the House of Commons. However, the projection’s uncertainty ranges ±37 seats in the 95 per cent confidence interval. Should the Liberals hold or even grow their lead among the older electorate, they could suddenly become the favourites in several key close races, ridings where party turnout could be the ultimate determining factor. The bell-shaped projection below is the seat projection probability density for the LPC (the darker the bars, the likelier the outcome):

A few additional points from older voters in key ridings could transform a razor thin 175-seat majority into a 190-seat blowout.

Naturally, let us keep in mind this is merely a snapshot of the political landscape using current data. It appears that Chrystia Freeland’s first budget as finance minister will get the approval of the House of Commons, mostly likely with the approval of the NDP caucus, and so no election should be called in the short term.

Nevertheless, looking at the numbers above, we certainly can understand and appreciate how tempting a late-spring election call must have been for Liberal strategists. However, a slower-than-expected start of the vaccine rollout and the rise of the third wave most likely all but shattered the May or June election window (and probably for the best).

Obviously, history shows one should never underestimate the possibility of the Liberals tripping over their own shoelaces. Nevertheless, should the Liberal-polling-higher-with-vaccinated-voters hypothesis be confirmed in the coming weeks, Canadians could inevitably be called to the voting booths before this 43rd Parliament blows its second candle next October—once most Canadians are fully vaccinated and find themselves ready to return to some levels of normalcy.