338Canada: The Liberals stop the bleeding, at least

Philippe J. Fournier: The latest election projection shows the two main parties deadlocked, though the Conservatives remain the favourites to win the most seats 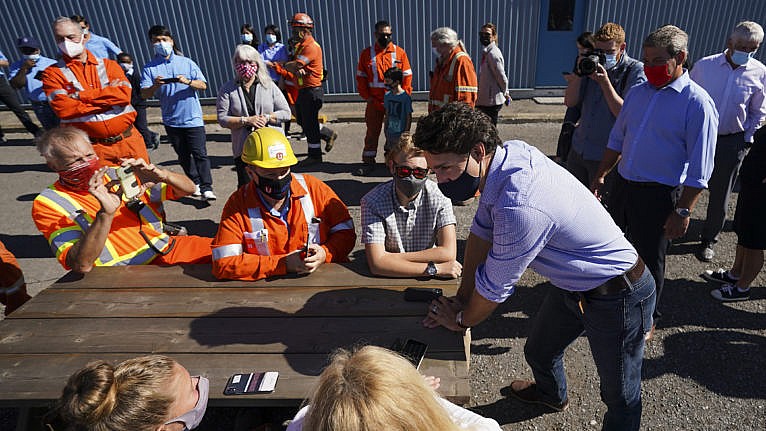 Trudeau speaks with steel workers at a campaign stop at a steel plant in Welland, Ont., on Sept. 6, 2021 (Nathan Denette/CP)

Three weeks of this snap five-week federal campaign are now behind us. While the first two weeks were marked by a gradual and constant decline in support for the Liberal Party (mostly to the benefit of the Conservatives), polls from this past week seem to indicate that the national numbers appear to have stabilized. However, while the Liberals may have managed to stop the bleeding, they have yet to regain any ground lost to the CPC since Aug. 15, particularly in Ontario and British Columbia. In addition, the Liberals’ dominance over Atlantic provinces since 2015 seems to be eroding somewhat, and several districts in this region which we initially thought were safe for the Liberal Party could potentially be at stake.

No fewer than eleven polling firms have posted updates over the past week (see the full list here). Based on the data from these polls, here is the updated 338Canada national vote projection:

The Conservative Party of Canada (CPC) remains in the lead with an average of 35 per cent support nationally. This is an average net gain of five points since the launch of the campaign. The CPC continues to dominate Western Canada, is now statistically tied with the Liberal Party in Ontario, and appears to be on the rise in the Atlantic provinces.

Justin Trudeau’s Liberals stand at an average of 31 per cent, a drop of 4 points since the start of the campaign. As we will see below, the Liberals enjoy a more effective vote than the Conservatives in the country because of their regional support, particularly in Quebec and Ontario. However, a Quebec-only Léger poll released just before the TVA debate last Thursday indicated that Liberal support in the province may be more fragile than it was two weeks ago, and that the Conservatives may be gaining ground. We will follow these numbers closely this week.

The NDP is holding on at the 20 per cent mark nationally, roughly where the party stood at the starting line in mid-August. As for Maxime Bernier’s People Party (PPC), it has tied (and maybe surpassed) the Greens in the polls. Considering that the PPC will have candidates in 311 constituencies against only 252 for the Green Party, it is quite plausible that the PPC will surpass the Greens in the popular vote in this election. We will keep our eyes on Beauce, where the PPC leader is trying to make a comeback.

Using these vote projection numbers and their regional breakdowns, we calculate the following national seat projections:

The Conservative Party sits at an average of 144 seats in the country, compared to 131 seats for the Liberal Party. The CPC would therefore be the favourite to win the most seats if the election were to take place today. However, this average gap of 13 seats between the two parties is well below the projection’s confidence intervals, meaning the two parties are still deadlocked in a statistical tie.

We can visualize this significant overlap in seat projections by plotting the seat probability density curves for the two parties. Each curve is a bell-shaped distribution centered around the average of each party:

For those looking at this chart and finding those projections to be highly uncertain, well, you would be correct. The race is close, regional polling data is highly noisy, and small variations in regional numbers can have a tremendous effect on each party’s seat totals. Such are the joys of first-past-the-post in a multi-party system.

As of this writing, the most likely scenario is a CPC plurality. Obviously, we must stress that Erin O’Toole would not automatically become prime minister should his party win the most seats but fail to secure a majority. In Canada, we elect Parliaments, not prime ministers. Should the final seat count be very close, one would bet that Justin Trudeau would probably try to secure confidence of the House before throwing in the towel and handing the reins to the Conservatives.

The final two weeks of this campaign will be crucial for both Justin Trudeau and Erin O’Toole, especially considering the two national Commission debates will take place this week (Wednesday, Sept. 8 in French and Thursday, Sept. 9 in English). Even though a majority government of any colour appears highly unlikely at this point in the race, the 338Canada model currently counts no fewer than 52 “toss up” ridings in the country.

Anybody who tells you with conviction that they know precisely how this election will unfold may suffer from overconfidence, because the available data currently shows anything but clarity.