Philippe J. Fournier: In the least populated ridings, Conservatives dominate voting intentions by 16 points. In the most populated, Liberals are up by 26 points. 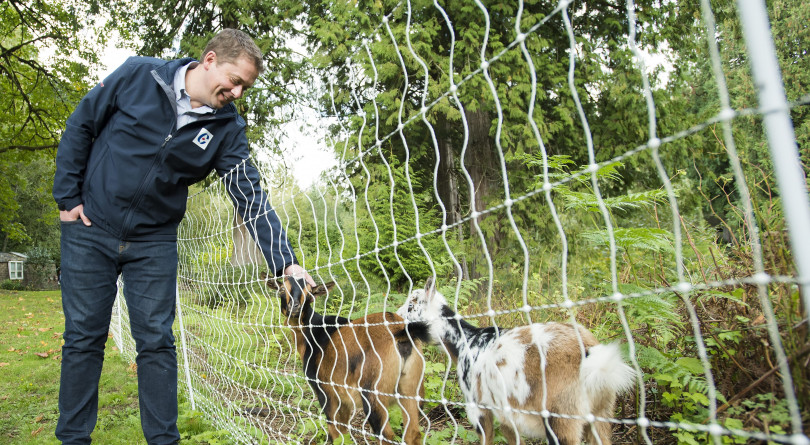 Scheer pets goats at the Triple Creek Farm during a campaign stop in Maple Ridge, B.C., on Sept. 27, 2019 (THE CANADIAN PRESS/Nathan Denette)

Among all the macro demographic data that helps define whether an electoral district should be considered urban, semi-urban, suburban or rural is population density. This measure is quite simple to calculate: it is the ratio of a district’s total population divided by its land surface area. Although it is by no means the only indicator of a district’s urbanity level, we will see below that there are unmistakable trends between voting intentions and population density in Canada.

For a column written by L’actualité magazine political bureau chief Alec Castonguay last week, I calculated a federal seat projection for urban, semi-urban and rural areas. The numbers were striking, so I decided to dig a little deeper.

So I decided to use the data from the 2016 Canadian census and create a list of all 338 federal electoral districts in Canada ranked by their population density and see whether the urban-rural divide was as clear as it seemed.

And the result is quite striking. The complete list can be found here. 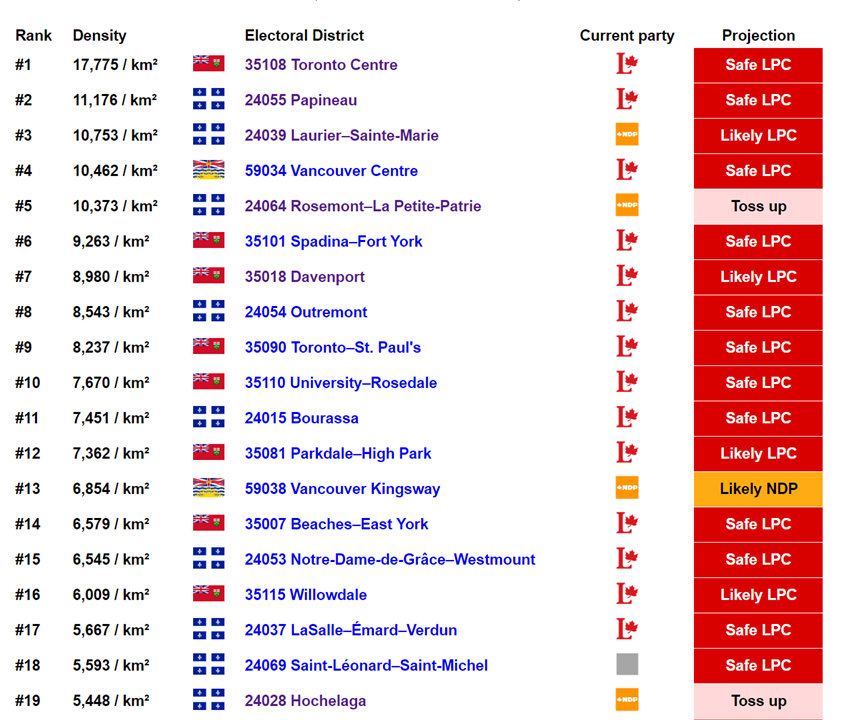 Of the five densest districts in Canada—all with more than 10,000 residents per square kilometer —three were represented by Liberals and two by NDP MPs at dissolution (including Papineau, the Prime Minister’s home district in Montreal). As of this writing, the Liberals are either leading or competitive in all of them.

We go down the list: In the top 30 districts, all of them either in Montreal, Toronto or Vancouver, every single district is projected to go either Liberal or NDP. In order to find the very first Conservative district, we must go all the way down to position #54 Beauport-Limoilou (population density of 2,872 residents / km²), in Quebec City.

When we go even farther down the list, we begin to notice a clear Conservative dominance at below 100 residents / km²: 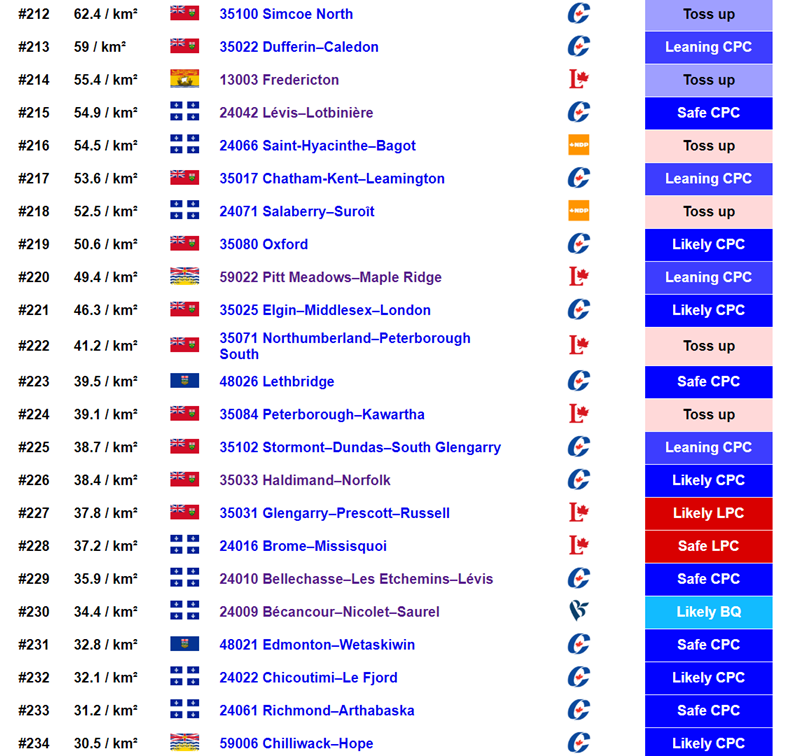 Electoral districts were split into seven groups according to their population density. Using the data from the latest 338Canada federal projection, we calculate the currently projected voting intentions for the Liberals and Conservatives in those seven district groupings: 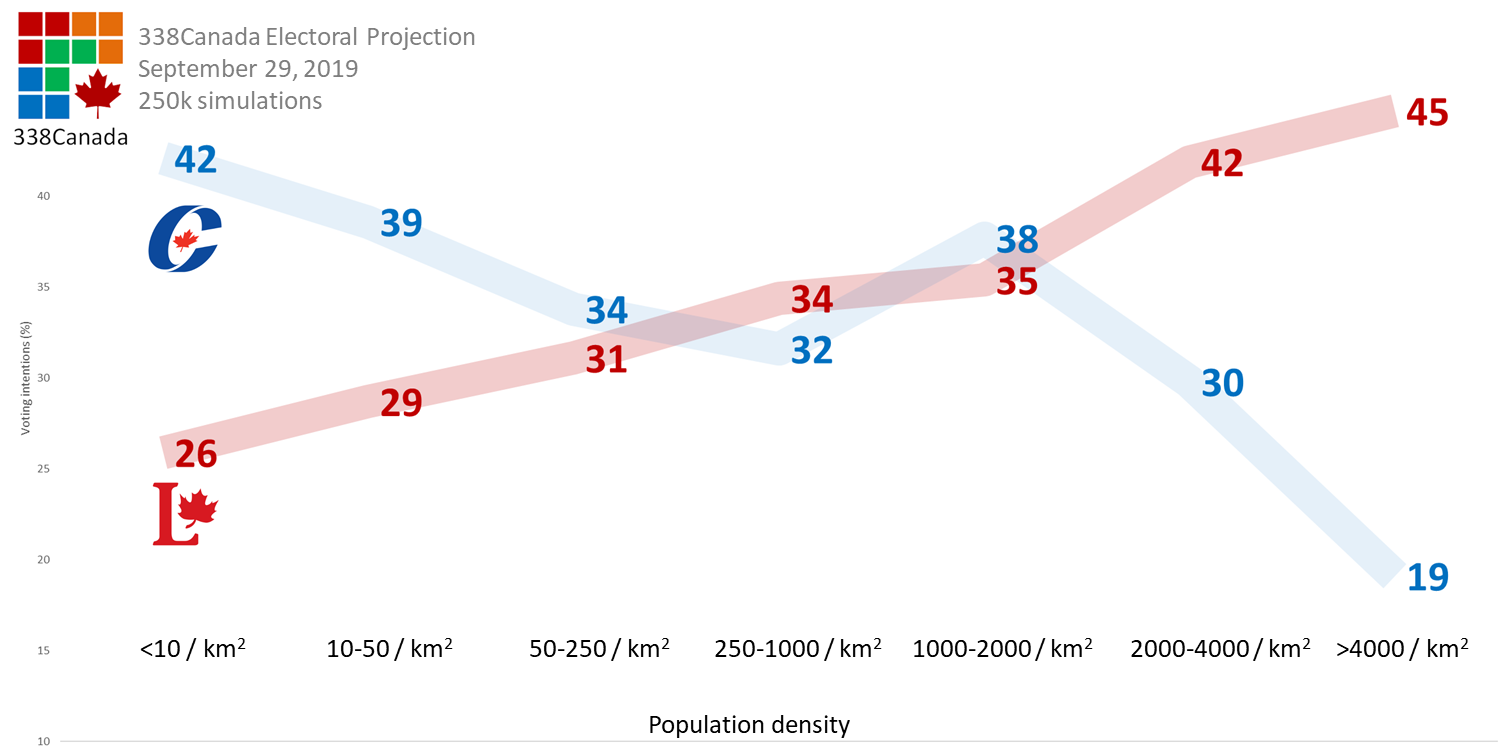 Much has been said and written about the East-West divide in Canada, but aside from a few exceptions, the rural-urban divide certainly appears even starker, and should also concern elected officials. Of course, we know there is an urban-rural divide not only in Canada, but all several western democracies. And naturally, the needs and interests of people living in downtown Toronto and Montreal simply cannot be the same as those living in rural Saskatchewan (and vice-versa). Nevertheless, as politicians keep saying they wish to unite and not divide Canadians, they will have to juggle with the fact that the gap between urban and rural Canadians appears to be growing.