338Canada: What is left of the Orange Wave in Quebec? Not much.

Philippe J. Fournier: Ten years ago, the NDP won a remarkable 59 seats in Quebec. In our latest election projection, the party is at risk of losing its lone seat in the province. 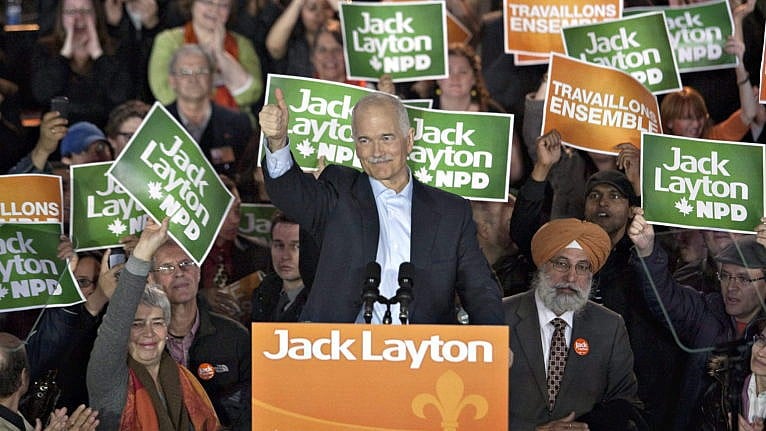 Layton gives the thumbs up to supporters in Montreal at a rally on April 23, 2011 (CP/Jacques Boissinot)

I had friends over for drinks and pizza. We all had written down our predictions on a board and even had made some friendly wagers on them. Everybody had the Conservatives winning the most seats (as polls clearly indicated in the last stretch of the campaign), although there was disagreement on the CPC’s margin of victory.

As for Quebec, late-campaign polling had shown Jack Layton’s NDP on the rise—and even ahead of the Bloc Québécois—but few in the room actually believed it would materialize into many seats, as the NDP had no roots or ground game in Quebec. In fact, not only had the NDP never won more than a single Quebec seat in a general election, but most NDP candidates in the province were “des candidats poteaux” (paper candidates), with the notable exception of Tom Mulcair running in Outremont.

That was 10 years ago tonight. We were watching the results come in on Radio-Canada, but the television was on mute while we ate and chatted about the state of Canadian politics. I kept an eye on the seat totals at the bottom of the screen. Early on that evening, we all understood that the Conservatives were going to have a good night, with near-sweeps of both New Brunswick and Nova Scotia. Nevertheless, I remember asking myself: “Why are results from Quebec taking so long to come in?” The Bloc Québécois number at the bottom of the screen kept oscillating between three and five for several long minutes. What was going on?

Then we saw the map. It was not that the Quebec results had been delayed in any way, but rather that the Bloc Québécois, a party that had dominated the federal landscape in the province for two decades until then, had been completely decimated, losing more than 90 per cent of its sitting caucus that night. Even BQ leader Gilles Duceppe lost his own district of Laurier-Sainte-Marie, where he had been elected seven times in row.

The NDP ended up winning 59 Quebec seats, a tally never matched by the Bloc Québécois in its history, and a total of one seat above Brian Mulroney’s Progressive Conservative rout in 1984. On the wager board, I was the one projecting the NDP with the highest seat count in Quebec among my group of friends with… 30 seats. Nobody was even close, including myself.

While the obvious national story that evening was Stephen Harper finally winning his long-coveted majority, the first majority for a conservative party at the federal level since 1988, the post-election narrative as I remember it was quite different in Quebec. With the Bloc nearly wiped out of the House of Commons, would the NDP become the champion of progressive politics for left-of-centre Quebec voters? Many observers noted that the 2011 election could have provoked a major party realignment and dramatically transformed Canadian politics for years to come.

It could have, but it did not materialize. As the CBC’s Éric Grenier wrote in his latest column, the 2011 election could have been a transformative one for Canada, but it now just looks like an outlier election.

Jack Layton passed away that summer, and was replaced by Tom Mulcair the next spring. While Mulcair proved to be an efficient parliamentarian and managed to keep his party competitive in the polls for most of this 41st Parliament, Mulcair was considerably outshone during the 2015 campaign by Justin Trudeau. The NDP went from 59 seats in Quebec in 2011 to only 16 seats in 2015. As for the Liberals, they went from a disastrous seven Quebec seats in 2011 to 40 in 2015, the highest tally for the Liberals in the province since 1980 (Pierre Trudeau’s last election).

Then in October 2019, the NDP was reduced to only 24 seats from coast to coast, including a single seat in Quebec.

So what is left of Jack Layton’s Orange Wave in Quebec 10 years after the 2011 election? Well, not much.

Consider the latest 338Canada seat projections (find the complete list of federal polls on this page). Nationally, the Liberals remain near the threshold for a majority at an average of 174 seats. The Conservative sit comfortably in second place just below its 2019 results of 121 seats, while the NDP still finds itself a distant third on the national scene with an average of 27 seats.

As for Quebec, it is still projected as a two-party race between the Liberals (averaging 39 per cent of support) and the Bloc Québécois (29 per cent). Here below is the latest 338Canada federal seat projection for Quebec (78 seats in total):

The lone Quebec electoral district held by the NDP currently belongs to MP Alexandre Boulerice in Rosemont-La-Petite-Patrie on the island of Montreal. According to the data provided by the 2016 Canadian census, Rosemont-La-Petite-Patrie (RPP) is amongst the most densely populated federal districts in Canada, with over 10,000 residents per square kilometre. Its neighbouring district to the west is Papineau, whose MP is Prime Minister Trudeau. Naturally, for its highly urban and multicultural demographics, we expect RPP to be in the crosshair of Liberal strategists this fall should an election be called.

With recent polls showing the Liberals gaining ground in Quebec and the NDP faltering, Jagmeet Singh is at risk of losing its lone Quebec seat. In fact, three federal polls fielded and published in the second half of April measured the NDP with single-digit support in the province (from Ipsos, Abacus Data and Mainstreet Research).

All of which suggests that RPP should be considered in play. Here is the latest 338Canada projection for RPP:

The NDP is not, at least for now, projected to be competitive in any other Quebec ridings.

As I have mentioned before, the past decade indicated how volatile Quebec politics can be at times (e.g.: Three consecutive provincial elections resulting in three different winners), which is why no political party should ever take Quebec voters for granted. As Jack Layton in 2011 and, to a lesser extent, Justin Trudeau in 2015 demonstrated, Quebec voters have not been shy to throw their lots with a charismatic candidate running a strong campaign, party loyalty be damned.

However, as evidenced by the NDP’s current numbers, success in one election does not guarantee success in the next.

For more details of this federal projection, visit 338Canada. Find your home district here or use the regional links below: