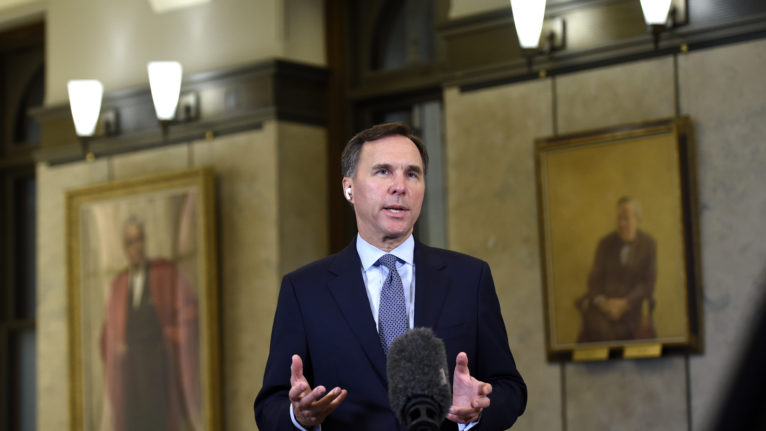 Minister of Finance Bill Morneau participates in a remote TV interview in the Foyer of the House of Commons on Parliament Hill on July 8, 2020. (Justin Tang/CP)

We’ll get to the trillion-dollar news eventually, but let’s shine a light on what you might not have read anywhere else. Yesterday, the auditor general’s office published its semi-annual audits. The Canada Border Services Agency, Department of National Defence and Canada Student Loans Program were all under the microscope. The auditors’ findings would normally set the agenda for the House of Commons.

Here’s just one of the AG’s myriad findings, as reported by Marie-Danielle Smith in Maclean’s: “50,000 foreign nationals are still on Canadian soil despite being ordered to leave, and the Canada Border Services Agency has mismanaged their removal in several ways.” Read our highlights from every audit.

Twice the bad news, half the bad press: Of course, the AG audits weren’t the only news of the day. As your newsletter correspondent writes in Maclean’s, Karen Hogan—that’s the name of the new auditor general—simply couldn’t compete with the government she holds to account.

If these aren’t scandals, they’re at least big problems for a federal government still battling a pandemic—and deserve close scrutiny. But because they’re all bundled into a report that landed the same day as Finance Minister Bill Morneau’s long-awaited economic and fiscal snapshot, these will be drowned out by reaction to the staggering $343.2 billion deficit—a number sure to fire up the country’s more hawkish economists, pundits and opposition politicians.

Ah, yes, the $343.2 billion deficit that’ll power the federal debt past a trillion bucks. The good news, if it counts, is that Canada’s support for workers and their employers was at or near the top of the G7. And all that new debt will be cheap to service. But there’s lots of bad news, uncertainty and endless red ink.

A pandemic-era economic and fiscal snapshot or patting their own backs? The Liberals couldn’t help but nod to the values they so publicly espouse, from acknowledging systemic discrimination to framing massive deficits with as much optimism as they can muster. As Marie-Danielle writes, the so-called snapshot also serves an historical purpose. That is, it’ll be required reading for COVID-19 101 somewhere down the road.

We do get a “snapshot” of something else. Here, for posterity, is a look at how Canadians report themselves to be coping, and how broadly they have availed themselves of unprecedented government measures during an unprecedented crisis (and an unprecedented uptick in the use of “unprecedented” as an adjective—it appears 26 times in the snapshot). There’s a phrase in the snapshot that is too eerily definitive. The COVID-19 pandemic, it reads, is “the challenge of our generation.” That does not sound like hyperbole now. Hopefully it will not sound that way to the kids of 2050, either.

What did the opposition think of the “snapshot”, you ask? The Tories were deeply unmoved and slammed the government for not giving the auditor general’s office more funding to examine pandemic spending. The NDP insisted the Liberals should crack down on overseas tax havens.

The next stage in the We Charity affair is tailored to federal governance wonks. Just how did that particular charity find itself on the receiving end of a $912-million contract to administer the Canada Student Service Grant? The answer to that question might be murky, but the process that guides federal policy development—if it was followed here—is clearcut. Read more on how the sausage is made here, here and here. Ishat Reza, a lawyer who spent three years at Treasury Board, which sits at the heart of the machinery of government, talked through that process from start to finish.

Reza also claimed government sources told her the CSSG proposal did, in fact, follow that trajectory. The ethics commissioner’s investigation, not to mention some precisely worded access-to-information requests, ought to shed light on this.

Yesterday, Jagmeet Singh didn’t mince words as he spoke about the man who allegedly rammed through the gates of Rideau Hall last week. Singh called the incident an “attempted attack by a radicalized domestic terrorist.” He also said the Mounties’ response contrasted sharply with police treatment of people of colour. “Systemic racism in policing is killing people,” he said. “De-escalation should be the norm, not the exception.”

Pandemic projections: In case you missed it, the Public Health Agency of Canada also published its latest COVID-19 projections yesterday (these are the charts). The news is mostly good, though localized outbreaks have pushed coronavirus’s reproductive number—a figure that measures how many people are infected by an infected person—past 1.0. (Generally, a number higher than 1 means the epidemic is spreading, not contracting—but PHAC says community transmission “remains low in most of the country.) Outbreaks are worst in northern Saskatchewan and Ontario’s Peel and Windsor-Essex regions.