A long-term care disaster that everyone saw coming

Politics Insider for May 27: Ford releases a devastating military report on elder care, Meng Wanzhou has her day in court and Twitter tackles Trump 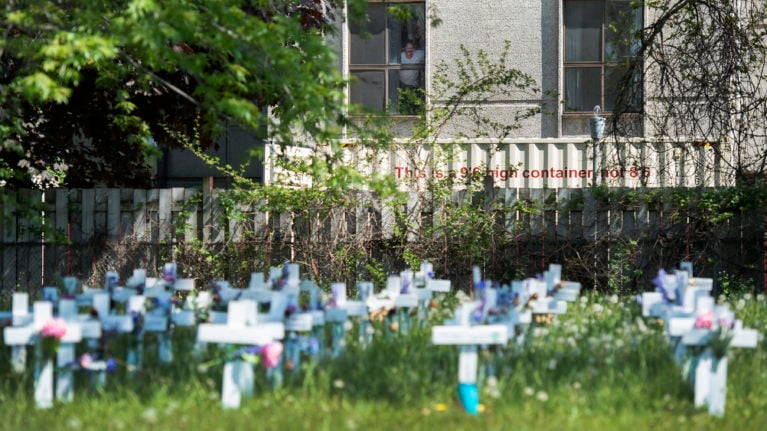 A man looks out the window at the Camilla Care Community centre overlooking crosses marking the deaths of multiple people that occured during the COVID-19 pandemic in Mississauga, Ont., on Tuesday, May 26, 2020. (Nathan Denette/CP)

Doug Ford looked rattled. Justin Trudeau looked stern. Both men were responding to a devastating report on the squalid conditions facing residents at five long-term care homes in Ontario. The report came from whistle-blowing members of the military deployed to five facilities in the Greater Toronto Area.

At a press conference, Ford called the report heartbreaking, horrific and gut-wrenching (read his full remarks). Trudeau said when he read the report, he felt a “range of emotions” including anger, frustration, sadness and grief (watch the PM’s full remarks).

What’s inside the report: Patricia Treble delved in after Ford made it public. This is just a sampling of what she found:

“The conditions were perfect for a deadly virus such as COVID-19 to strike,” writes Treble, who details the Ford government’s changes to inspection procedures and the province’s slow response to combatting COVID-19. She points to decades worth of reports into the fraying system of elder care. Treble ends with the obvious question: “If it took the intervention of the Canadian Armed Forces for the public to find out the dire situation at five facilities, what are the conditions in the other 621 LTC homes in the province?”

Today marks a possibly ground-shifting moment in Canada-China relations. A B.C. judge will rule on the so-called “double criminality” at play in Huawei exec Meng Wanzhou‘s extradition case—whether or not her alleged U.S. crimes would also be considered crimes in Canada. If Associate Chief Justice Heather Holmes finds no double criminality, Meng could be a free woman. If not, she can look forward to more court dates.

Meng’s spirits don’t appear dampened in public. She recently cheekily posed with a thumbs-up gesture on the courthouse steps in Vancouver. The two Canadians imprisoned in China in retaliation for Meng’s arrest, Michael Kovrig and Michael Spavor, haven’t had consular access in months and can barely dream of free movement outdoors.

Meanwhile, a spokesman for China’s foreign ministry once again urged Canada to release Meng “at an early date” in order to “avoid continuous harm” in bilateral relations. Asked by the Globe and Mail if Canada would face reprisals if the B.C. court rules against Meng, Zhao Lijian said he doesn’t “take hypothetical questions.”

Joyce Murray, the Liberal minister for digital government, has her staff engage on the Chinese-owned WeChat social network. TheBreaker.news first reported that a user post on Murray’s group promoted a lawsuit that targets Global News reporter Sam Cooper. Murray’s office denied any support for the post and Trudeau called the post “unacceptable.” Time for a group moderator to step up their game, perhaps.

Baby steps: Everyone knows that U.S. President Donald Trump sounds off in fact-free fashion on Twitter. For years, the social media giant has faced calls to take action against the leader of the free world. Yesterday, a new feature popped up attached to his tweets: “Get the facts” links to media reports debunking the president’s claims.

In the former auto-making mecca of Oshawa, Ont., General Motors has retooled part of its assembly plant to manufacture masks. The feds will buy 10 million masks from the company over the next year. Sixty former autoworkers will assemble the personal protective equipment in two shifts.

A mea culpa: Yesterday, we mistakenly promoted Germany to a permanent member of the UN Security Council. In fact, Germany’s term expires this year (along with Belgium’s two-year stint). It’s one of those seats that Canada covets.

Your morning smile: Renee Filiatrault, a former comms aide to three defence ministers—including Harjit Sajjan—stumbled on the perfect metaphor for human efficiency, or maybe rebellion against rules, outside the Museum of Nature.