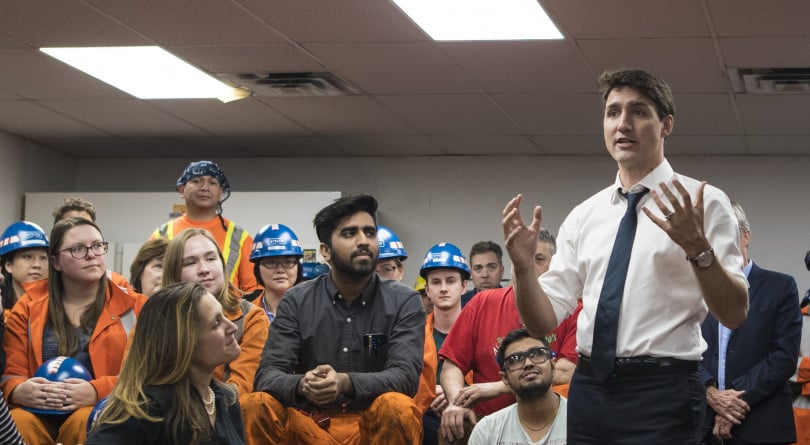 Prime Minister Justin Trudeau speaks with employees at Stelco in Hamilton, Ont., on May 17, 2019. (Tijana Martin/CP)

We add three new polls to the 338Canada federal model this week, and this fresh data appears to indicate that the Liberals may be gaining in the crucial battleground of Ontario, where 121 electoral districts, more than a third of Canada’s federal districts, are located:

The complete list of federal polls is available on this page. Here is the 338Canada/Maclean’s Federal Projection Update for June 30, 2019.

The Conservative Party of Canada leads the way and stands at an average support of 35.2 per cent nationally. Although there have been fluctuations in CPC support over the past six months, it appears that the 35 to 36 per cent mark may be a ceiling for the Conservatives. Their highest 338Canada average since the New Year was 37 per cent in late March at the peak of the SNC-Lavalin controversy.

In early February, just before the story broke in the Globe and Mail, the Conservative average stood at 34 per cent, barely one point lower than today’s average. 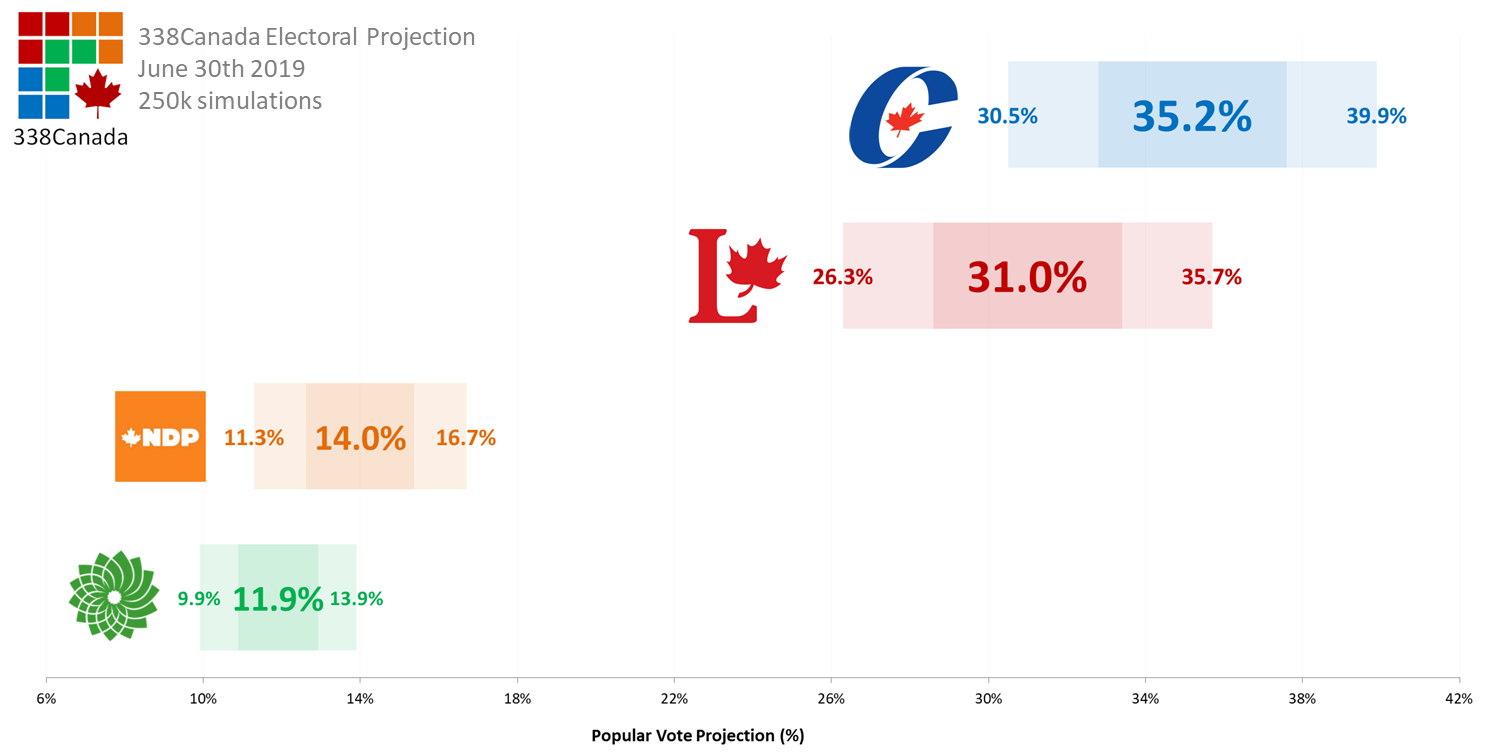 The Liberal Party of Canada climbs modestly to 31.0 per cent this week. As we will see below, with rising Ontario numbers, the Liberals’ seat projection has significantly improved. Nevertheless, LPC numbers west of the Ontario-Manitoba border remain well below their 2015 levels.

The NDP falls to an average of 14 per cent and the Greens climb to 11.9 per cent. Although the Greens have been gaining ground in the past months, the core of their support remains on Vancouver Island—where they could potentially sweep all seven districts.

Here are this week’s averages compared to the latest polls made available: 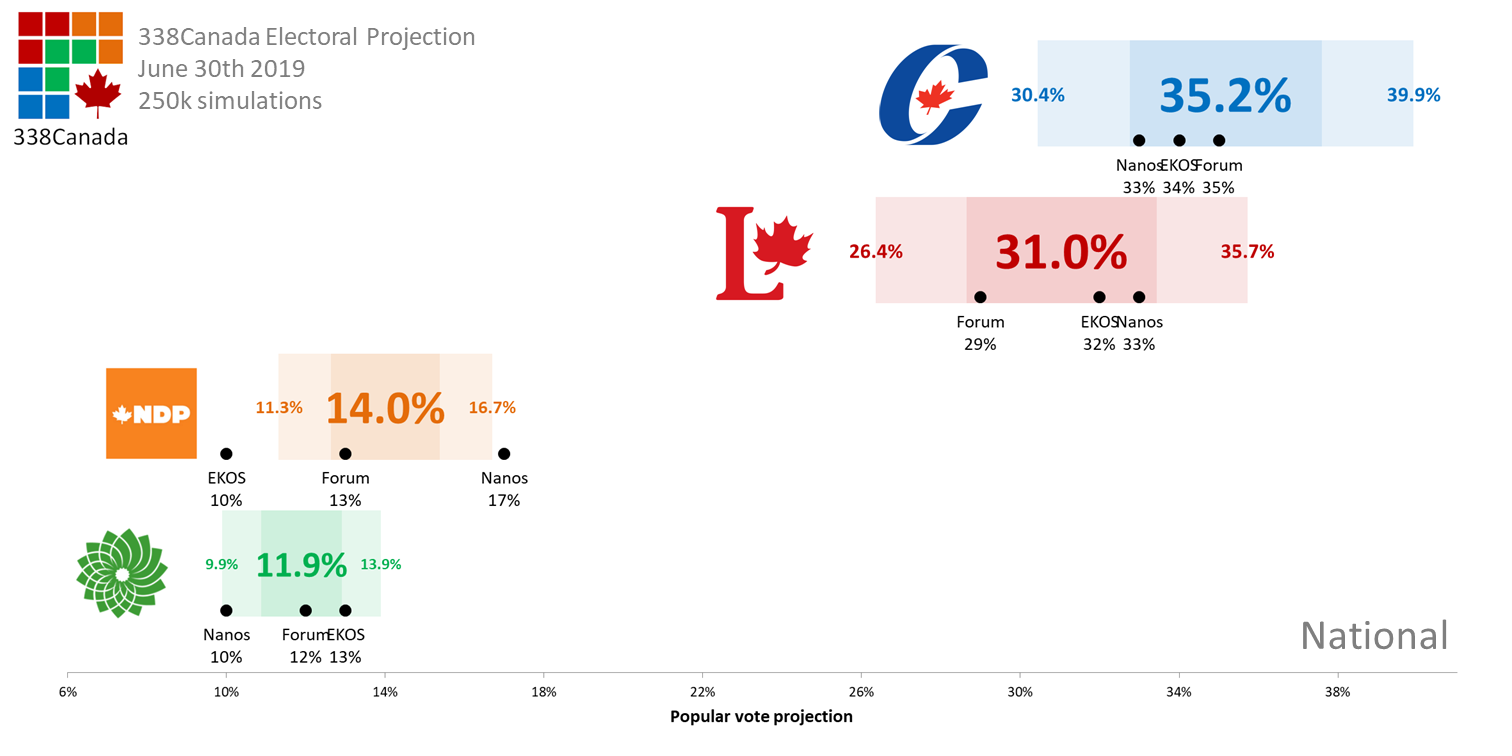 Every data points lies within the projection’s confidence intervals, with the notable exception of the NDP’s, which Nanos measures at 17 per cent nationally and EKOS, 10 per cent.

We mentioned above the crucial Ontario battle between the LPC and CPC. Here are all the federal Ontario polls since last fall: 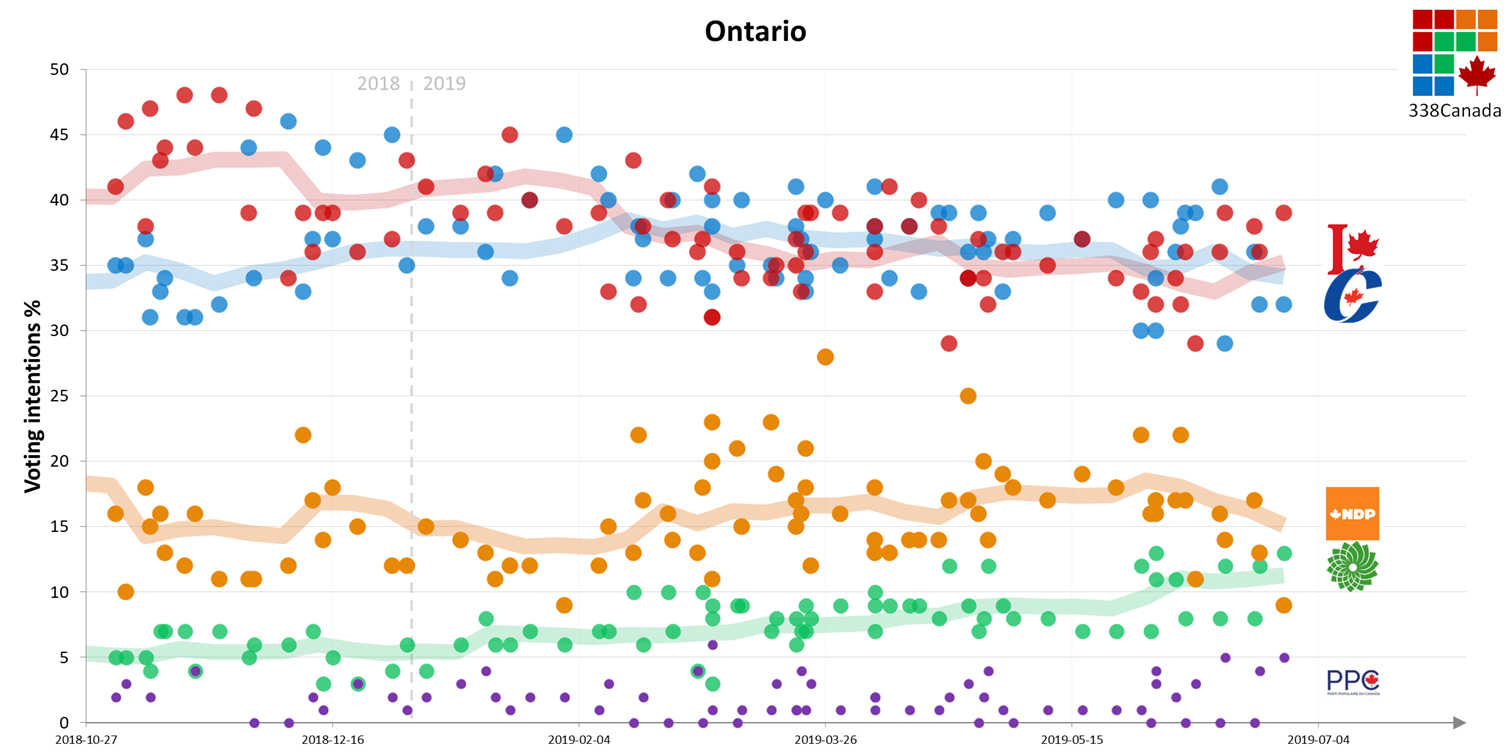 The coloured dots indicate Ontario poll numbers; the pales lines are the 338Canada weighted averages. Although there are significant fluctuations from one poll to another, we notice the Conservative average has not moved much over the past eight months. In contrast, we see the Liberals dropping significantly starting in early February. Are these new improving Liberal numbers in Ontario just noise or signs of a new trend? We will find out in the coming weeks.

Here are the Ontario averages compared to the latest poll numbers. Again, the NDP numbers are those that show the greatest disparity. 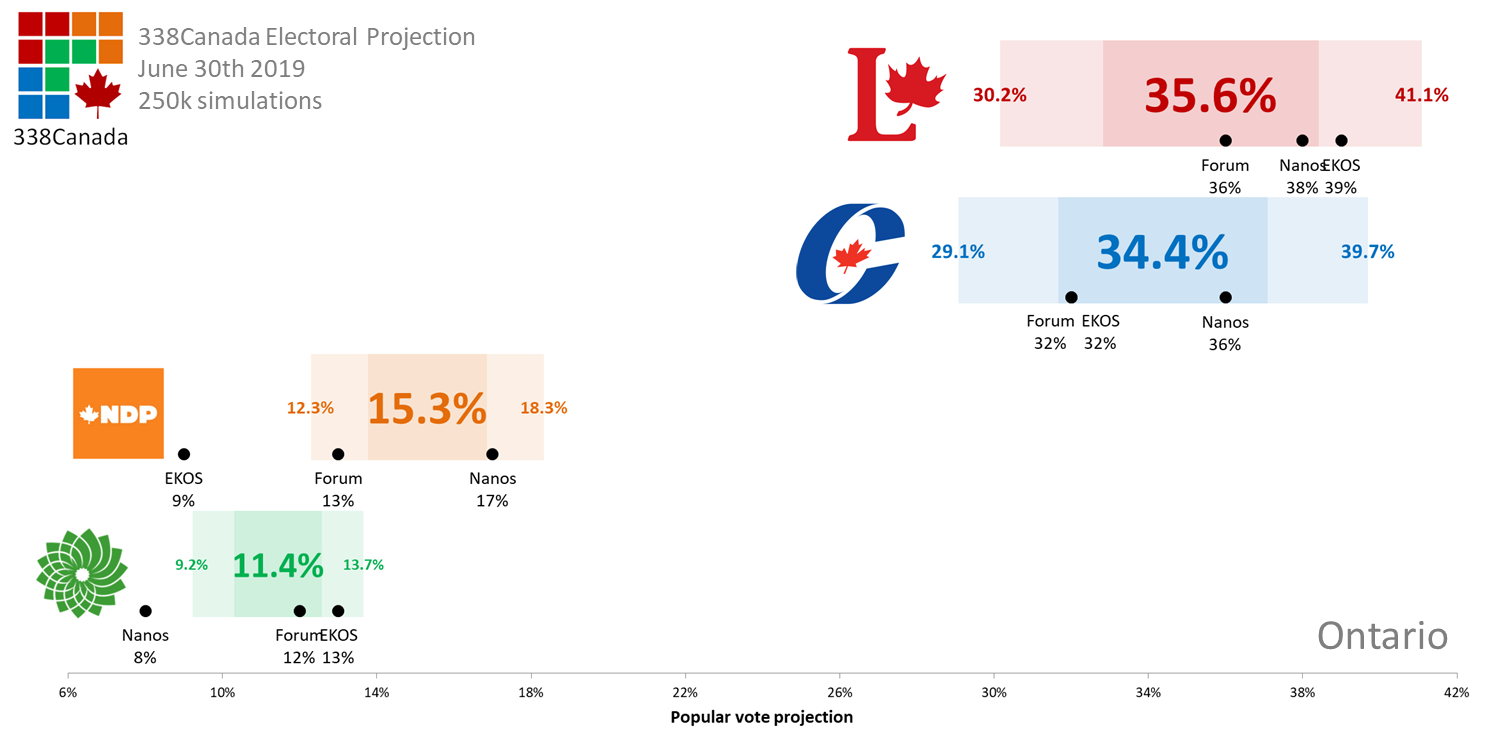 The Conservatives remain in the lead in this week’s national seat projection with an average of 159 seats. 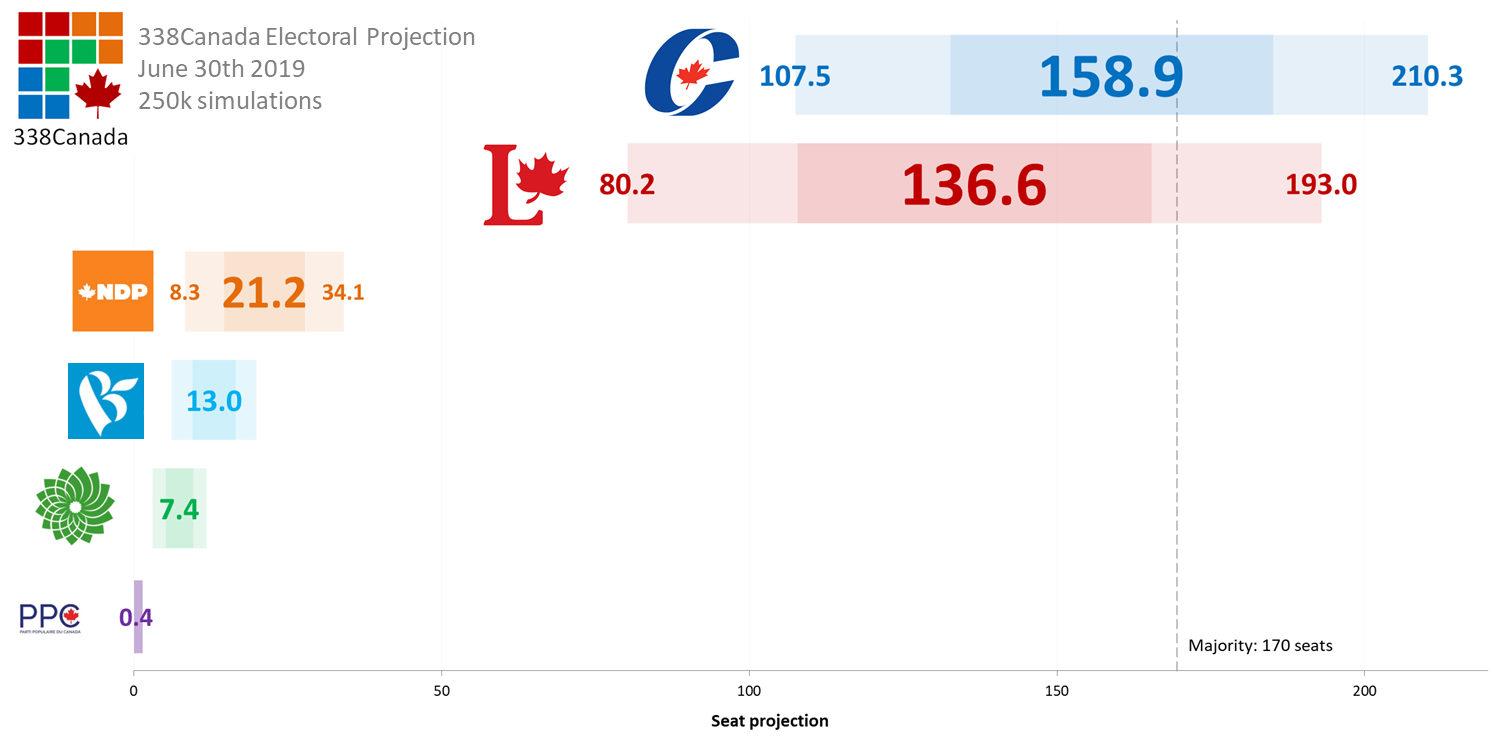 Naturally, the latest diverging polls have widened the confidence intervals, which is why the Conservative and Liberal brackets overlap significantly: 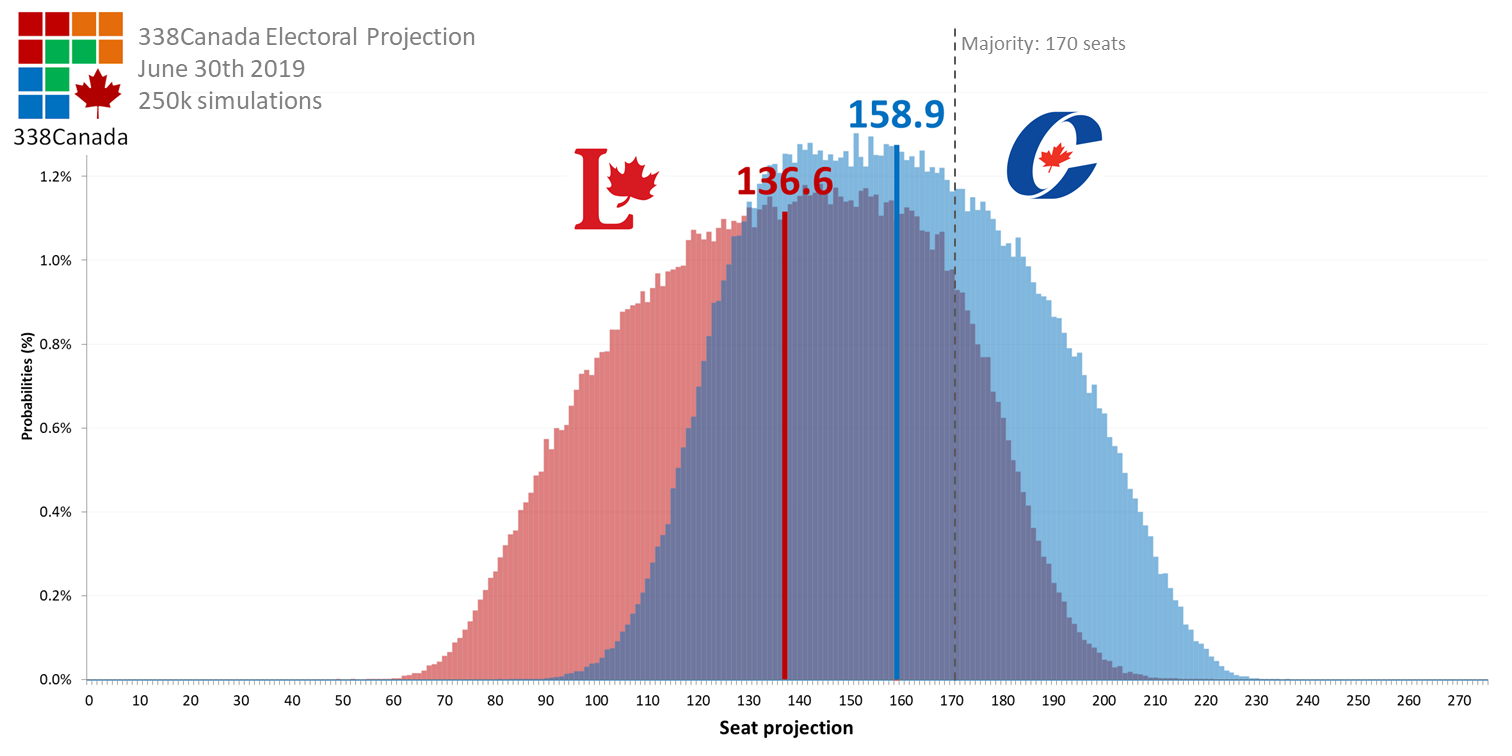 The Liberals’ average seat total reaches 137 this week, an increase that is driven mostly by their improving numbers in Ontario. It is important to note that, since the projection is so close, a normal-sized 2-point swing and/or polling error between these two parties could completely flip this projection on its head. The only real certainty right now is uncertainty.

According to this week’s numbers, the Conservatives win the most seats in about six of 10 simulations performed by the 338Canada model. The CPC wins a majority of seats in one third of simulations. 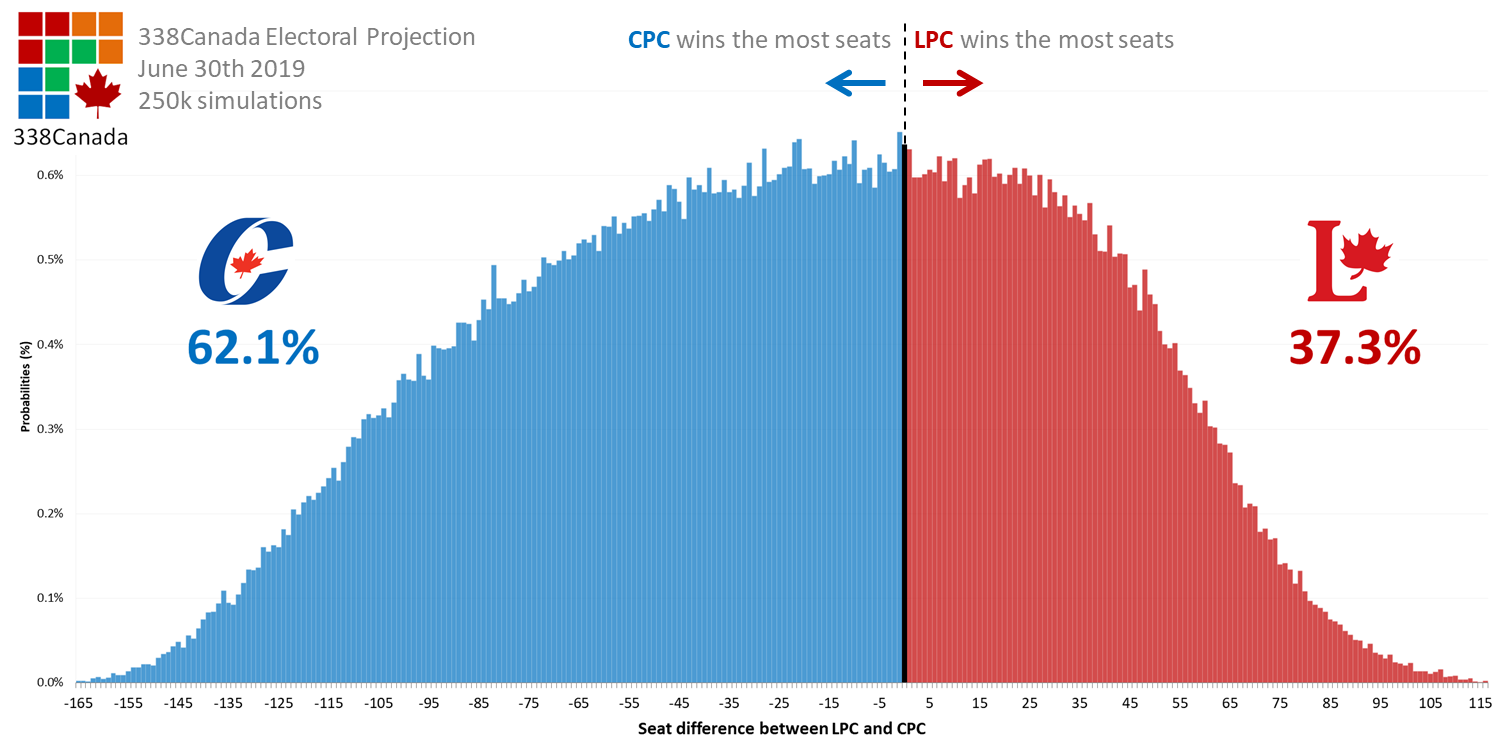 Last week, we explored the current favourable CPC numbers in Quebec, stating that a path to a majority for Andrew Scheer would be much smoother with significant gains in the province. This observation still holds, but without at least half of Ontario seats, it would be virtually and mathematically impossible for the Conservatives to reach the 170-seat majority mark.

What if, hypothetically, Ontario were to be split in half between Liberals and Conservatives? According to current data, it could probably mean the election would come down to the results in British Columbia—which would make for a long (and late) election night on Oct. 21… More on this theoretical scenario in a future column.