Politics Insider for May 1: A tragic military helicopter crash leaves one dead and five missing, small businesses are still anxious about rent and the federal deficit could hit a quarter-trillion dollars 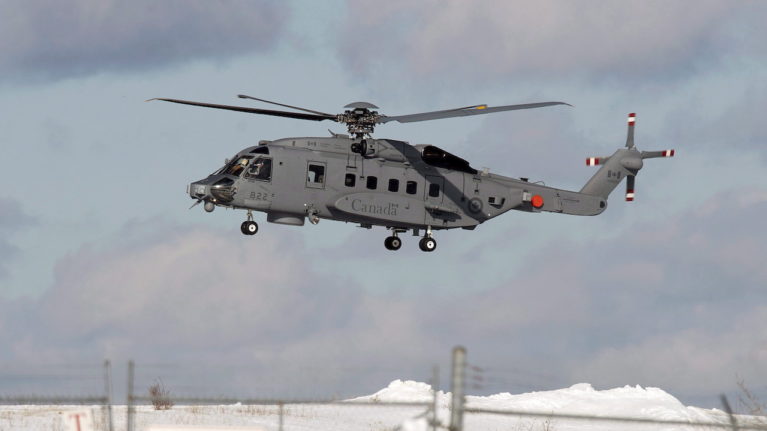 A CH-148 Cyclone maritime helicopter is seen during a training exercise at 12 Wing Shearwater near Dartmouth, N.S. on March 4, 2015. (Andrew Vaughan/CP)

Justin Trudeau paused his daily ritual outside Rideau Cottage to join Defence Minister Harjit Sajjan, deputy minister Jody Thomas and Jonathan Vance, the chief of the defence staff, at a sombre press conference on Parliament Hill. They confirmed that a CH-148 Cyclone helicopter assigned to HMCS Fredericton had crashed during NATO exercises in the Ionian Sea, between Greece and Italy.

They also confirmed the death of Sub-Lieut. Abbigail Cowbrough, and said search-and-rescue efforts were underway for the five other personnel aboard the Cyclone. Later, the Department of National Defence released the names of those who remained missing: M.Cpl Matthew Cousins, Capt. Kevin Hagen, Capt. Brenden Ian MacDonald, Capt. Maxime Miron-Morin and Sub-Lieut. Matthew Pyke.

Only a week ago, Cowbrough paid tribute to Nova Scotia by playing “Amazing Grace” on the deck of her ship and posting the video to Facebook.

Yves Giroux, the parliamentary budget officer, crunched a new estimate of the federal budget deficit for this fiscal year, an eye-popping $252 billion. That’s good enough for a 48.4 per cent debt-to-GDP ratio, the highest in 20 years (but still substantially lower than the modern high of 66.6 per cent in 1995-96).

All the federal spending might inadvertently confuse some unemployed Canadians who get called back into work. No Canadian should qualify for both the Canada Emergency Response Benefit and, through their employer, the Canada Emergency Wage Subsidy. Anyone who started receiving the CERB will have to pay it back if their job is subsidized by the CEWS. Bryan Borzykowski, writing in Maclean’s, cuts through the bafflegab to explain who qualifies for what, and why some people might have to repay some of their emergency dough.

A week has now passed since the Federation of Canadian Municipalities sounded the alarm about the deteriorating state of city finances nationwide. FCM’s $10-billion ask for emergency funding has so far gone unheeded. The NDP, which this week forced the feds to boost aid for students with disabilities or dependents, has called on the Liberals to step up.

A new survey by the Canadian Federation of Independent Business reported only 10 per cent of commercial renters who qualify for federal-provincial rent relief announced last week were confident their landlords would sign up for the program. Forty per cent said they qualified and weren’t sure about their landlords. And over one-third said their revenue hadn’t dropped severely enough for them to qualify. Avoiding disaster would, said the CFIB, take “a miracle on Main Street.” The lobby group is calling for direct grants for struggling commercial tenants.

The Globe and Mail scored the inside scoop on Ontario’s desperate struggle to acquire N95 masks as the pandemic hit home. “With the province a week away from running out of N95 respirator masks, the government struck a deal to buy 100 million of them—only to see it evaporate,” write Marieke Walsh and Nathan Vanderklippe.

Mona Fortier, the Liberal minister of middle-class prosperity, has a job with twin definitional challenges: What exactly is the middle class? And what constitutes prosperity? We learned in January, after Tory MP Pat Kelly asked the government, that the feds have no strict definition of the middle class. Yesterday, iPolitics dug up the government’s definition of prosperity, a response to a written query from the very same Tory MP. The answer: it’s complicated.

The Supreme Court dropped its 2019 annual report, a typical compendium of statistical highlights and noteworthy rulings. But the real fun is in the photos, where we catch a glimpse of Canada’s classiest team meeting and a reminder that the ostensibly impartial chief justice, Richard Wagner, once sided with the Winnipeg Jets by donning the team’s jersey. Oh, and in case you didn’t know, the court has a mascot.