Politics Insider for April 3: Trudeau calls Wilson-Raybould recording 'unconscionable', the ex-Liberals respond, and reaction from around Ottawa to the expulsion 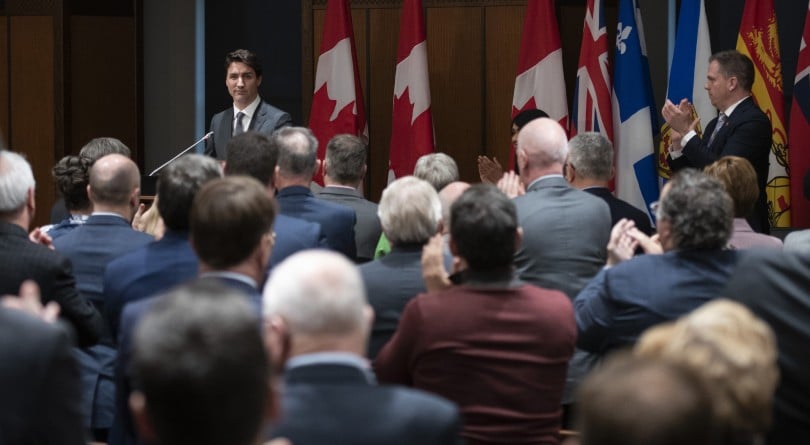 Members of the Liberal Caucus give a standing ovation to Prime Minister Justin Trudeau after his speech at an evening caucus meeting on Parliament Hill in Ottawa on Tuesday, April 2, 2019. Trudeau has kicked both former attorney general Jody Wilson-Raybould and fellow ex-cabinet minister Jane Philpott out of the Liberal caucus. (Justin Tang/CP)

Liberal MPs gave Prime Minister Justin Trudeau a standing O after he kicked two of his former star cabinet ministers, Jody Wilson-Raybould and Jane Philpott, out of the Liberal caucus over their criticism of his handling of the SNC-Lavalin criminal case. (Canadian Press)

Many immediately wondered why Philpott was also turfed since only hours earlier she’d said she continues to have confidence in Trudeau in all things except his handling of the SNC-Lavalin file: “Apart from that I support the policies and platform and the government and the prime minister.” (CPAC)

After being expelled from the Liberal caucus, both issued statements on social media.

Wilson-Raybould: “Reflecting on what PM has done, my thoughts are w/ my constituents in #VanGran, my dedicated staff & volunteers, my family & friends & all Canadians who believed in a new way of doing politics. I will take the time to reflect & talk to my supporters about what happens next. What I can say is that I hold my head high & that I can look myself in the mirror knowing I did what I was required to do and what needed to be done based on principles & values that must always transcend party. I have no regrets. I spoke the truth as I will continue to do. (Twitter)

Philpott: “This isn’t about a lack of loyalty. On the contrary, I recommended that the government acknowledge what happened in order to move forward. This was an expression of loyalty, not disloyalty — in the same way that Jody Wilson-Raybould attempted to protect the Prime Minister from the obvious short-term and long-term consequences of attempts to interfere with prosecutorial independence — but to no avail.” (Facebook)

Here’s how some key figures reacted to the news:

As part of its non-going investigation into the SNC-Lavalin controversy, the House justice committee had released a batch of text messages between Wilson-Raybould and Trudeau’s former advisor Gerald Butts earlier Tuesday that showed rising tension between them ahead of January’s cabinet shuffle. Wilson-Raybould warned Butts that moving her out of the Justice portfolio would send a bad message to Indigenous Peoples. She noted that protests were underway across Canada in support of members of a B.C. First Nation who’d been arrested during a pipeline protest. “Timing of ‘pushing’ me out (which will be the perception—whether true or not) is terrible,” she texted.

“Nobody is ‘pushing you out‘, ” Butts replied.

Get this man a lozenge: While Liberals were deciding the fates of Wilson-Raybould and Philpott, Conservative MP Pierre Poilievre was into his second day of filling the House of Commons with his dulcet tones. To put pressure on Trudeau to reopen the SNC-Lavalin investigation Poilievre is planning to speak four days straight—with nights off—thereby preventing debate on the government’s pre-election budget. A rough tally from Monday’s Hansard records shows the MP for Carleton, Ont. uttered more than 27,100 words before packing it in for the night.

Clement time: Claiming it was “actually not a difficult decision” Tony Clement finally decided that his political career was over, nearly six months after he revealed an attempt to blackmail him over sexually explicit images he’d sent to who he thought was an online admirer, but was allegedly two men in Africa’s Ivory Coast. He subsequently came clean about pursuing relationships with a number of women online, prompting Conservative Leader Andrew Scheer to boot him from caucus. (ParrySounds.com)

Please stand by: Due to a technical interruption tomorrow’s Politics Insider newsletter will arrive in your inbox a little later than usual. Watch for it to land around 9 a.m. ET.