Alberta likes what Quebec's been cooking on the independence front 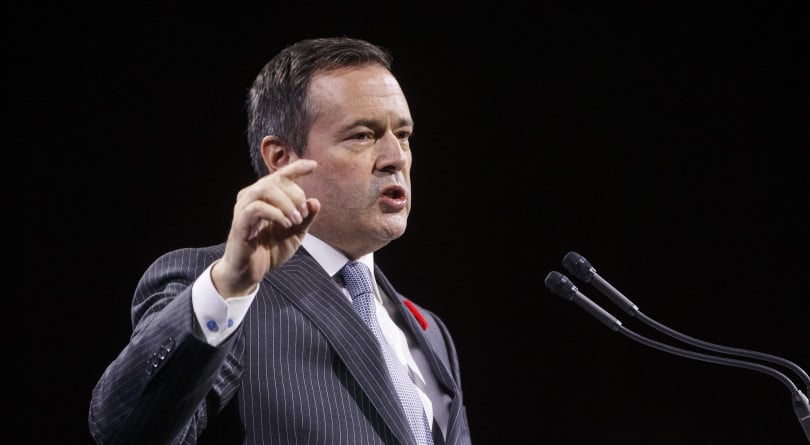 Alberta Premier Jason Kenney delivers his State of the Province address to the Edmonton Chamber of Commerce in Edmonton on Tuesday, October 29, 2019. (Jason Franson/CP)

Same questions, different answers?: Premier Jason Kenney spelled out the mandate of a new “fair deal” panel set up to examine ways the province can seize more powers from the federal government and make Alberta more independent of Ottawa. On the panel’s to-do list: consider whether Alberta should create a provincial plan and withdraw from the CPP, whether it should establish a new provincial bureaucracy to collect taxes within the province instead of the Canada Revenue Agency, and whether the province should replace the RCMP with a provincial police force. Perhaps the panel will come up with different answers than the last time they were asked by Ralph Klein’s “Strengthening Alberta’s Role in Confederation Committee” in 2003.

“We’re open to discussing anything right now.” That was B.C. Liberal MP Carla Qualtrough talking about the demand by Alberta and Saskatchewan for Ottawa to negotiate a new equalization formula, though by anything, she didn’t mean Bill C-69, the government’s legislation to change environmental assessments conducted on major projects.  “Change C-69? I don’t think so.”

Coming up this week: Trudeau is set to meet with both opposition leaders and premiers. On Tuesday he’ll sit with both Andrew Scheer and Saskatchewan Premier Scott Moe. The latter brings a list of demands, including a one-year pause on the carbon tax. Trudeau will meet Bloc leader Yves-François Blanchet on Wednesday, followed by NDP leader Jagmeet Singh on Thursday.

Separatism is in again, Quexit edition: In recent years the Parti Quebecois has downplayed separatist messaging but after the Bloc’s big federal election win the PQ is getting back to its independence roots. At a conference over the weekend the party adopted a statement of principles that says independence is the “logical and desirable outcome of nationalism.” There to give PQ members a pep talk was Blanchet, whose party was the big winner on election night: “The Quebec nation is waking up and soon Quebecers will say yes because they will have started to dream again of what can be in an independent Quebec.”

The battle against Quebec’s Bill 21: During the last election campaign federal leaders were loath to be seen challenging Quebec’s secularism law banning many public employees from wearing religious symbols (read: Muslims wearing headscarves) but some are challenging the law in court, including the English Montreal School Board, which itself is embroiled in controversy. Paul Wells on how the school board plans to win:

Bill 21 is broadly similar to bills that were introduced by Quebec’s short-lived Parti Québécois government, led by then-premier Pauline Marois, in 2013 and, in milder form, by the Liberal government of Philippe Couillard in 2017. Defenders of such measures say it’s important for the Quebec government to show no religious preference in its relations with citizens. It’s often said to be justified by the fact that, until a half-century ago, Quebec was in many ways a Roman Catholic theocracy. The text of the law says it is “important that the paramountcy of State laicity”—an absence of religious affiliation—“be enshrined in Quebec’s legal order.”

The EMSB’s Angela Mancini isn’t impressed. “I think the separation of state and religion has been going on for a while, regardless of whether teachers wear symbols in a classroom,” she said. “In my mind it goes back to fundamental rights. People are allowed to wear the symbols that they choose to wear.” In a school setting, parents and students should rest easy, she said. Wearing a headscarf or a crucifix “doesn’t mean teachers are going to impart” their religious convictions to their students, she said.

The board has retained the services of Power Law, a prominent Montreal firm, to challenge Bill 21. The lawyers’ argument is novel and promising, as we’ll see. And it’s probably for the best that the file has been turned over to outside experts, because Mancini and her colleagues have a lot of other concerns on their minds these days. Read more ››

Today of course is Remembrance Day. Here’s an idea: standing by our desks in silence might be a moving experience, but we can and should do better. The Maclean’s editorial argues it’s time to consider making the day a statuary holiday: “We need to stand together instead, at the thousands of cenotaphs and memorials that dot this country, lean in against the blustery wind and nestle the children beside us for two minutes of silence. We need to do it in all provinces and territories. These dangerous times require nothing less.”

At exactly 11:00 a.m. ET on Nov. 11 sunlight through a window at the Canadian War Museum in Ottawa illuminates the headstone from the tomb of Canada’s Unknown Solider. Maclean’s will livestream the moment here.