Liberal MPs are an endangered species in the province, but an electoral wipeout there could prove a serious problem for a second Trudeau term 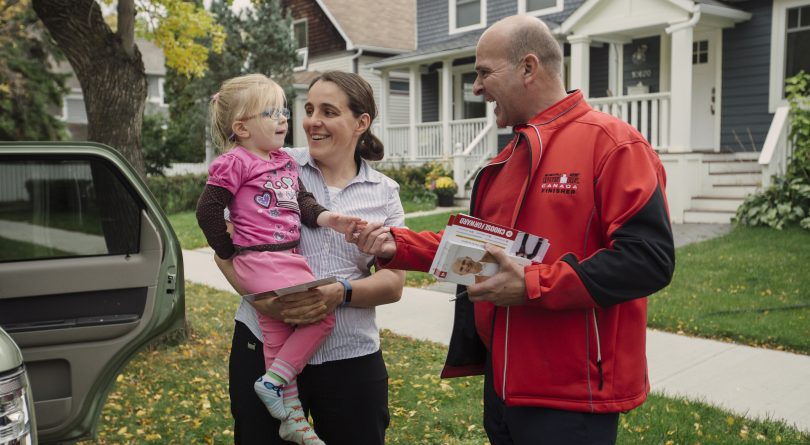 Amarjeet Sohi had an encouraging story to share with his Liberal campaign aide and a reporter. The previous evening, he might have persuaded a voter. “I spent 10 minutes with a constituent who had this perception that we are not supporting the energy sector,” he announced over a mid-morning breakfast. The Edmonton Mill Woods incumbent says he explained at this man’s doorstep that the Trudeau government is building pipelines (including the Trans Mountain expansion it bought), offered oil industry loans during the downturn and is working to diversify the sector with research funding and investments in petrochemicals. The would-be Conservative voter reacted with surprise at Sohi’s recitation of the Liberal record.

It happens a lot, he claims. People’s eyes light up almost every time. “I’m spending a lot of time at the doors having one-on-one conversations with those people who are ill-informed.”

This bit of chipper news from Sohi brings to mind an enduring (and cynical) political axiom: If you’re explaining, you’re losing.

Liberals have never had it easy in Alberta, but in 2015, Justin Trudeau did the improbable: he overcame decades of grief over his father’s National Energy Program to establish a four-seat beachhead in the 34-seat, Tory-loving province. Four years on, to defend that hard-won turf, the Liberals must beat back renewed hostility in Alberta, fuelled by economic doldrums, oil patch job losses, hurdles to pipeline development and pipeline-related legislation so hotly contested in oil country that NDP ex-premier Rachel Notley dismissed it as “a stampede of stupid.” Old western alienation grumblings are back with a vengeance, and Conservatives—provincial and federal—have set all the blame at Trudeau’s feet. During Alberta’s spring election, Jason Kenney’s party ran ads tying NDP Leader Rachel Notley to the incumbent PM, because in much of the province there’s nothing nastier you can say about somebody.

This means those Liberals defending their turf have much explaining to do. And polls bear out the other half of the axiom: they’re losing. Trudeau’s party risks getting wiped out in Alberta, according to poll aggregations that show its support bleeding away since the last election. Sohi and his colleagues have many minds to change and lost ground to cover, and not much time to do it.

Two of the seats Liberals claimed last time were in Calgary, which hadn’t painted a riding red since 1968, the first outing for Pierre Trudeau as prime minister. (That seat went Tory the following year.) One of those rookie MPs, Darshan Kang, left caucus in 2017 over sexual harassment issues, while the other, Kent Hehr, quit cabinet amid harassment allegations but stayed on as a Liberal after he apologized to one accuser. Though the controversy could damage Hehr’s support among female inner-city voters—a key Liberal demographic—he says it seldom comes up on the campaign trail. Less often, certainly, than beefs about Justin Trudeau. “The Prime Minister isn’t everyone’s cup of tea,” he concedes. Unlike the standard “Team Trudeau” Liberal lawn signs across the country, Hehr’s omit any mention of his boss, though the candidate says he had nothing to do with that decision and, anyway, people don’t need to be reminded to know Trudeau is his leader.

While Conservatives rap Trudeau for “attacks on our province” (Kenney) and a “callous attitude toward Western Canada” (Jag Sahota, the Tory candidate in Kang’s old riding), the PM has kept trying to prove the haters wrong—or, at least, to keep showing up. He’s visited Calgary and Edmonton for announcements and speeches multiple times each year, more regularly than predecessor Stephen Harper, who never had to scrape for love in his home province.

Trudeau swung by during the Calgary Stampede to flip pancakes at a breakfast in Hehr’s riding and to attract donors to a Saturday-morning reception in the 21st-storey café of a downtown office tower—far removed from the “yellow vest” protestors on the sidewalk. Eighty-some Liberals turned out, a smaller gathering than 2015’s pre-election Stampede event at a larger venue.

This time, the leader told the crowd that he loves learning from Grits in Alberta. “If you’re a Liberal in Alberta, it’s because you believe. You really believe,” he said. “Not because it makes you popular or gets you an in at the country club.” Conversations in Calgary and Edmonton, Trudeau continued, remind him Albertans are smart and reasonable, “regardless of what the loudest voices tend to say.”

He sought to appeal to such reasonable people across Canada—to simultaneously embrace economic growth and environmental protection—by supporting the Trans Mountain expansion to B.C., while nixing the similarly contentious Northern Gateway bitumen pipeline and passing legislation that bans oil tankers on the northwest coast. The Liberals seemed to believe they were striking a similar compromise with Bill C-69, environmental assessment legislation that set speedy review timelines for energy projects but also required consideration of climate impact and other issues such as gender.

Most of the energy sector spoke of C-69 as a nail in the coffin for a gasping industry. Or, as Kenney called it, “the no pipelines act.” Trudeau and the Liberals bemoan the lack of credit they get for approving the Trans Mountain project, then buying it for $4.5 billion to prevent a U.S. company from euthanizing the venture. But they get few kudos from the Kenney government, and the fact it’s been thwarted once by B.C. Indigenous communities in courts, and may be yet again, will do little to create confidence it will get built, even as construction resumes in Alberta and B.C. this fall.

Hardline partisans in Alberta have spread the idea that the Liberals bought Trans Mountain simply to kill it, something that beggars belief due to the flak the party has taken from climate activists and irks Sohi given all the work he’s done as natural resources minister to consult with Indigenous leaders and push the pipeline along. “You talk to the average person out there, they say: ‘Yeah, we understand [Trudeau] bought it to save Alberta jobs,’ ” he says.

But there’s enough anger, with enough intensity, to give Conservatives confidence they’ll run up the seat count in Alberta—a full 34 steps, even, toward the majority they covet. Sohi’s rival, former Edmonton MP Tim Uppal, primes the anger on the doorstep by asking voters if they’re happy with Trudeau and the Liberals. People “are very, very angry,” Uppal says; he hears a lot of “he screwed us” and other profanities.

READ MORE: Imagining a federal election without Alberta or Quebec

It doesn’t help Trudeau that the provincial NDP offered a much firmer pro-pipeline, pro-oil stance than he has. They, in turn, were eclipsed by Kenney and his pledges to battle Trudeau’s policies in the courts while creating a “war room” to counter environmental activists. Scheer also comes down unabashedly on the side of greater resource extraction. “Canadians and Albertans deserve a government and a prime minister that is proud of our oil and gas sector and will champion it all across the world,” he said at a campaign stop in Calgary.

Greg McLean, Hehr’s Conservative opponent, has been handing out stickers with a quicker version of that message: proud of oil.

If any Liberals in Alberta are left standing, they’ll most likely be in Edmonton, whose downtown and multicultural southeast went with the red team throughout the Jean Chrétien and Paul Martin years. Those are the strongholds that Randy Boissonnault and Sohi, respectively, are defending this fall. Where Tories like Uppal ask how happy voters are with the Liberals, the Edmonton Liberal incumbents de-emphasize their party brand—they want voters to consider how they, as well-meaning local representatives, are doing. (Though they do boast routinely about the party’s Canada Child Benefit and other popular initiatives.)

Both draw hope from the near sweep of the city in the 2019 provincial election by Notley’s NDP, even as Kenney trounced them elsewhere. The federal Liberals read it as a signal that the ridings still have good progressive bones. So Edmonton Liberals are kicking up just as much dust about Kenney in this federal campaign as he did against Trudeau in the provincial vote—jurisdictional differences be damned: federal Liberals are telling voters they’ll be voices against Kenney’s much-anticipated budget cuts, a sensitive issue in a city with many public servants. “People are scared of Kenney, and they think Scheer will just take orders from him. People don’t know how deep he’s going to cut,” says Boissonnault, the candidate for Edmonton Centre.

Incumbent Liberals also hope to consolidate traditional NDP and Green votes behind their united progressive alternative, in particular to pry away New Democrats who don’t share Jagmeet Singh’s rigid anti-pipeline stance. One riding to watch: Edmonton Strathcona, where for the past three terms, New Democrat Linda Duncan has benefited from a “Liberals for Linda” movement. Duncan is retiring, leaving the NDP and Liberals to scrap for this university-area seat (which Notley herself represents provincially). The Conservatives, meanwhile, hope they can divide the opposition and reclaim it. In province-wide polling, Green party and NDP support levels don’t seem to have wavered—not as much as Liberal support has—even if the Grits do retain their distant second-place standing.

The elder Trudeau’s 1968 breakthrough in Calgary was a one-term flash in the oil pan; when the Liberals last won four seats in 1993 (all in Edmonton), that total was halved four years later. The potential now is a Liberal government without a single Alberta voice in caucus to relay the province’s hopes and anxieties. “It will not do Albertans any good to be shut out of a Justin Trudeau government,” Boissonnault says.

By the same token, winning another mandate without a single Alberta MP could cause Trudeau to give up on his years-long experiment in the province. That might delight environmentally minded voters in the rest of Canada, but it’s hard to see it as good for the country. Albertans are already, on the whole, feeling angry and fearful. A Liberal government that has written them off politically, and has little incentive to shore up their key industry, would give them much more to worry about.

This article appears in print in the November 2019 issue of Maclean’s magazine with the headline, “Few Grits.” Subscribe to the monthly print magazine here.