Albexit would make Brexit 'look like a walk in the park'

Politics Insider for Dec. 20: The case for Alberta separatism, basic income gets a shout-out from the PM and what China could do with a Huawei 5G network in Canada 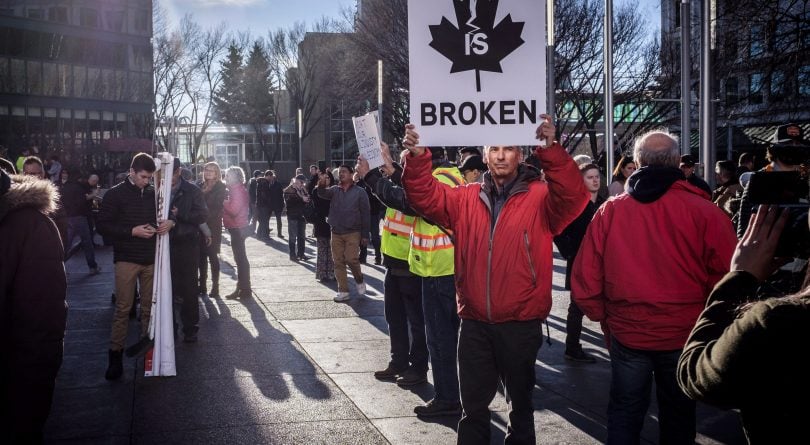 Oil and gas industry supporters gather at a pro-pipeline rally at city hall in Calgary in De2018.THE CANADIAN PRESS/Jeff McIntosh

Alberta is looking at being forced to sit it out, thanks to political decisions being made by Canadians outside the province. Because of the lack of pipeline capacity promoted by environmentalists who push for Canada to be a “climate leader,” and the politicians who play along, Albertans are losing high-paying jobs, wealth, government revenues and foreign investment in the oilpatch. The lack of support from other provinces — especially British Columbia and Quebec — is raising questions about Alberta’s place in Confederation.
…
It’s typical to pooh-pooh the possibility of Alberta separation as unrealistic, given the close familial and economic relationships Albertans have with other parts of Canada. But if Brexit happened, then Albexit is just as possible. Probably more so, given the existential threat to Alberta’s prosperity over resource development. (Financial Post)

Others like constitutional scholar Emmett Macfarlane are, shall we say, less convinced: “A secession process under Canada’s system, with its culture of federalism, with its existing constitution, would make the Brexit process look like a f–king walk in the park.” (Twitter)

Meanwhile, more than 1,000 Alberta truckers formed a convoy through the town of Nisku in support of building a pipeline. Conservative Leader Andrew Scheer was also in town and took aim at the Trudeau government’s offer of $1.6 billion in loans and other financial support for Alberta’s oil sector: “In typical Alberta fashion, the message sent back to Ottawa loud and clear: We don’t need handouts, we just want to get back to work.”(CTV News)

Back to basic: A guaranteed minimum income program for Canada may be back on the table. Both Justin Trudeau and Social Development Minister Jean-Yves Duclos have recently signalled their interest in the idea of a basic income. Trudeau said “it’s still something that is in the universe of all sorts of tools that we’re looking at on how to best help Canadians,” while Duclos suggested such a program is an inevitability in Canada: “At some point, there will be a universal guaranteed minimum income in Canada for all Canadians.” Neither provided a timeline, but in the past the Trudeau Liberals have been cool to the idea. (Global News)

Scheer said the Trudeau government shouldn’t tear up the contract to sell armoured vehicles to Saudi Arabia. If Canada wants to punish Saudi Arabia for the killing of journalist Jamal Khashoggi and the war in Yemen, it should ban all oil imports from the Kingdom. (Globe and Mail)

For what it’s worth, the Saudis are falling behind in their payments, to the tune of $1.8 billion as of September. (London Free Press)

Huawei is working to build 5G networks across Canada, however there have been calls from security analysts to ban the company from such work. In a worst-case scenario, where international relations between Canada and China seriously devolved, China would hold the technological keys to disrupt Canada’s 5G network:

In short: if Chinese authorities want access to Huawei data, they can have it, a scenario all the more worrying as Huawei continues to help build the next generation of Internet, known as 5G, across Canada.

Besides faster Internet speeds at home, 5G will open up the potential of interconnected devices: self-driving cars, remote surgeries, and streaming virtual reality. But if, hypothetically, relations between the two countries were to hit a rough patch, then Beijing could conceivably decide it wants access to any of that vital data spanning across Canada’s 5G networks via Huawei. (Maclean’s)

For its part Huawei is telling Canadian officials it will do whatever it takes to “ensure the integrity and security of 5G networks in Canada.” (Financial Post)