And now, the inevitable Bill 21 fight

Paul Wells: An important and spontaneous debate has broken out in Ottawa that the party leaders had been desperately trying to avoid 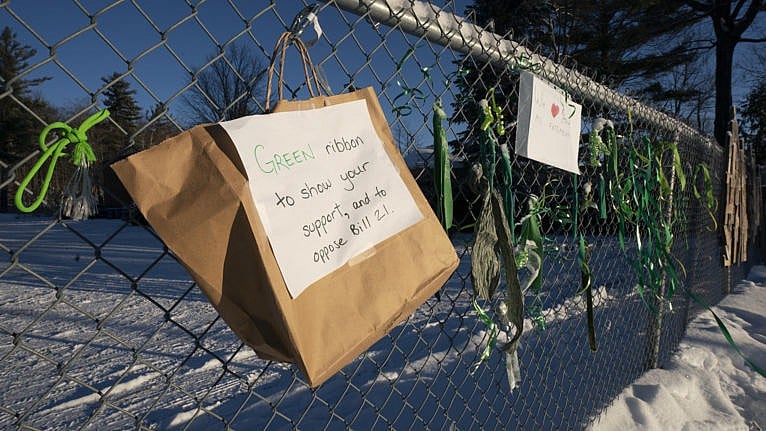 Signs and ribbons hang on a fence outside an elementary school protesting Quebec Bill 21 on Dec. 9, 2021 in Chelsea, Que (Adrian Wyld/CP)

Here’s one measure of how little Building Back Better we’re getting done here in the nation’s capital: MPs from different parties and perspectives are having an interesting conversation about important matters. But it’s entirely off-book. It’s spontaneous, the leaders of the various parties didn’t ask for it, and it’s pretty clear they desperately wish it weren’t happening. In Ottawa, saying what you think is an act of rebellion.

The week’s topic is, of course, Quebec’s Bill 21, which forbids hiring public servants, including teachers, who dress incorrectly (“The persons listed in Schedule II are prohibited from wearing religious symbols in the exercise of their functions.”) The bill was introduced in March of 2019 and passed into law soon after. Federal party leaders fielded questions about it in debates during the 2019 and 2021 elections. Each time, Quebec’s premier François Legault got angry at the people who asked the questions. So did federal party leaders, who pay ever-growing hordes of witless staffers to tell them how to move and talk and who cannot for the life of them understand that the rest of us aren’t also conscripts in that effort.

READ: The battle against Quebec’s Bill 21

Anyway the inevitable happened. This week news broke that a Grade 3 teacher in the bucolic Quebec town of Chelsea, a stone’s throw from Ottawa, was pulled from class for wearing a hijab. Here’s how it played in one early story: nameless teacher reassigned to “another function” outside the class, school officials shtum on details, shocked community hanging green ribbons.

A chain reaction ensued. Kyle Seeback, a Brampton Conservative MP, kicked it off by tweeting, “I cannot in good conscience keep silent on this anymore… Bill 21 has to be opposed. In court, in the house of commons and in the streets.” Jamie Schmale, Chris Warkentin and Mark Strahl tweeted their agreement.

Seeback’s conscience seems to have gnawed at him after he retweeted a Wednesday-night tweet from the Globe’s Robyn Urback wondering why Catherine McKenna, the former Liberal environment minister, now calls Law 21’s application “appalling” but didn’t, at the time, contradict Justin Trudeau’s milder language in the 2019 and ’21 campaigns. Good for Seeback, actually, for amplifying some snark aimed at a Liberal and then realizing it applied to him too. Soon McKenna and the Conservative MPs had company among Liberals still in caucus: Alexandra Mendes, Salma Zahid, Iqra Khalid, Marc Garneau. Finally a sitting cabinet minister, Marc Miller, called the law’s application “cowardly.” There is also a clip of Chrystia Freeland, the federal Minister of Careful What You Wish For, saying as close to nothing as she can possibly say, a recurring highlight of many recent debates.

READ: ‘A sadness you can’t describe’: The high price of Quebec’s Bill 21

I don’t like Bill 21 either. It’s based on silly reasoning—“the state” must have no religion, so nobody who works for the state may be seen to have any religion. This is like saying the state has no particular height, so public servants must be required to hover above the ground. Somewhere around here there’s an old column I wrote patiently explaining this logic and its heritage in the receding role of the Catholic church in Quebec society, a column some of my Toronto colleagues still enjoy mocking, but there’s a difference between understanding the argument and buying it. On a list of the top, say, thousand problems facing modern Quebec, “teachers in head scarves” would not appear. And one of the most obvious things we can say about this law is that the costs it imposes—in personal freedom, economic opportunity, social ostracism—is essentially never borne by people named Tremblay or Côté or Wells. Somehow the burden seems to land reliably on people named—well, in the current instance, on Fatemeh Anvari. About whom more in a moment.

I have also never felt that Bill 21 reveals some universal moral failing of “Quebec.” Every criticism I can level against this law has been levelled, many times, by Quebecers, including several of the Liberal MPs who ran out of patience yesterday; the Quebec Liberal and Québec Solidaire parties, which between them won more votes than Legault’s party did in 2018; an impressive selection of municipal politicians and commentators in, mostly, Montreal; and Judge Marc-André Blanchard of Quebec Superior Court, whose ruling struck down parts of Bill 21 and exclaimed his helplessness with regard to the rest: he plainly doesn’t like the thing, but Legault’s use of the constitution’s “notwithstanding” clause protects most of the law from legal challenge or judicial invalidation. Solid majorities in Quebec have supported the law in polls, but I’m not sure how long that will last, and since the law’s Charter-proofing provisions must be renewed every five years in the National Assembly, I’m not sure the law itself will last long either. I reject the notion that only Quebecers may have an opinion on the thing, because of course everyone can have an opinion on anything. But the conversation among Quebecers is plenty multifaceted already.

A few points of context. First, the provisions of the law, as they apply to the Western Quebec School Board which employs Fatemeh Anvari, have already been struck down. Minority-language education rights are notwithstanding-proof, and Judge Blanchard did to the provisions regarding English school boards what he plainly wished he could do to the whole law. Legault’s government appealed the ruling, and under Quebec law the provisions remain in place pending appeal, but Legault will lose the appeal and by next year, there may be no remaining barrier to teachers in hijabs teaching in Quebec’s English-language schools. This doesn’t help the rest of the province, at least not immediately, but it sets up two cases that parents will be able to observe and compare. Which is a ball that can bounce in many different ways over time.

Second, in interviews Anvari is plainly rattled by a situation she should not be in. But neither is she fired nor banished to the furthest reaches of her school’s steam-pipe trunk distribution venue. As the Lowdown’s excellent story notes, she’s been assigned to lead “a literacy project for all students [that] will target inclusion and awareness of diversity.” This is not as good as simply letting her teach the curriculum would have been, if the law had permitted it, but it shows considerable wit. Again, in a complex society, citizens respond in ways governments often don’t intend and wouldn’t prefer. Governments often don’t take that news well.

Third: those calling on governments to do something, now including members of the federal governing caucus, are sometimes short of ideas about what, precisely, to do. Federal lawyers in a court challenge could make no argument that hasn’t already been made—and, largely, rejected by the frustrated Judge Blanchard. Short of reviving the obsolete powers of reservation and disallowance, a step even Pierre Trudeau declined to take against even Bill 101, there’s not much a federal intervention could add.

Is there therefore no point in simply talking, or simply sending federal lawyers to say what lawyers for civil-society groups have already said? No, I think there’s a point, in that it brings government’s actions more closely in line with what are obviously the opinions of the people who compose the government. (Note that there isn’t a single Liberal MP tweeting, “Guys, Bill 21 is great!”) A reduction in the amount of hypocrisy in a system is always welcome and lately well overdue. But as a practical matter, the feds can’t do much to change the situation.

Finally, less important but still worth mentioning: When four Conservative MPs tweeted within minutes about their renewed love of freedom, it was hard to escape the suspicion that there’s something else going on. Perhaps this: those Conservatives are not, by and large, conspicuous Erin O’Toole fans, and many come from ridings where much of the Conservative voter base is spitting mad at O’Toole for perceived softness on vaccine mandates. When Seeback talks about opposing Bill 21 “in the street,” that sure sounds like an echo of the way a lot of people opposed vaccine mandates. MPs who can’t give their voters much satisfaction on the latter are probably grateful for a chance to blow off some steam on the former. That’s not to dismiss or rebut the Bill 21 Freedom Four; it’s just to note that motives are often mixed or additive.

Here’s the thing: in a liberal democracy you can’t keep a cork in everyone’s mouth forever. You shouldn’t try. It’s been fun watching the leaderships of three federal political parties try to deny simple human feelings over an inherently emotional issue. But the fun’s over. Now citizens are going to act like citizens. Always a scary moment for communications professionals.