Who will lead the Conservative Party now: The 'brilliant' Rona Ambrose? The critic Peter MacKay? Jason Kenney!? The race is on. 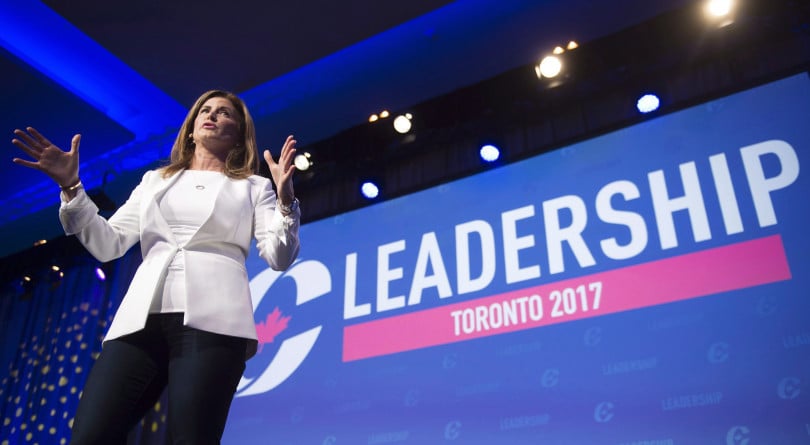 Ambrose speaks at the federal Conservative leadership convention in Toronto on May 27, 2017 (THE CANADIAN PRESS/Frank Gunn)

Andrew Scheer’s surprise announcement that he was resigning as Conservative leader on Thursday—after weeks of doggedly defending his party’s results in the Oct. 21 election and, at most, allowing that perhaps communication could have been better—launches his party, abruptly but cleanly, into the search for a new leader.

Had Scheer not stepped down, the same process would have percolated away messily in the background as internecine squabbles and sotto voce allegiances until the party convention in April forced the issue with a mandated leadership review.

So now that Scheer has accelerated the timeline and instead paved the way for refreshingly open squabbles and allegiances, it’s a good time to take stock of a few of the most prominent would-be successors whose names have been tossed around.

She held a fistful of different cabinet positions in Stephen Harper’s government, then when he stepped down after the 2015 election, she became interim leader of the party and Leader of the Official Opposition.

Ambrose has since retired from politics and made it clear she likes private life, but her name comes up insistently in this conversation because she possesses a  hugely advantageous list of characteristics for a potential Conservative leader at this moment. She’s Albertan born and bred, young, female and feminist, and she represents a friendlier, more progressive and less elbows-up breed of Conservative than has been most visible in recent years, while still being viewed as a true-blue Harperite Tory.

“From the perspective of those who are parsing the field for someone to stand in Scheer’s place and bring a still-united party to the next federal campaign, few names tick as many boxes as Ambrose’s,” columnist Chantal Hebert wrote of why Ambrose made sense as a leadership candidate at a fractious moment of the party—as well as why she would be a clever cross-partisan pick for Prime Minister Justin Trudeau to appoint as U.S. ambassador.

Indeed, the corpse of Scheer’s leadership had not even begun to cool on Thursday when Alberta Premier Jason Kenney told a journalist, “Rona would be my first call,” adding, “She would be a brilliant leader.”

As leader of the Progressive Conservatives, MacKay merged his party with the Canadian Alliance to form the present-day Conservative Party, under whose banner he subsequently became a prominent Harper cabinet minister. But more recently, in his political retirement, MacKay has been a human vending machine of colourful and devastatingly on-point criticisms of the Conservative campaign under Scheer’s leadership.

The party’s failure to win the election, even given all the headwinds Trudeau’s government faced, was, “to use a good Canadian analogy…like having a breakaway on an open net and missing the net,” MacKay opined. And the Liberals succeeded in making sure the leader’s socially conservative beliefs on abortion and same-sex marriage “hung around Andrew Scheer’s neck like a stinking albatross,” he said.

MacKay has spent the weeks since the election alternating, with a ludicrous sort of coyness, between these Quote-O-Matic diagnoses and insisting he supported Scheer and was not organizing a leadership bid.

Of course, even what scant plausibility hovered around those denials seemed to evaporate within hours of Scheer announcing he would step down, when reports revved up that MacKay’s camp was “mobilizing” and working the phones.

A prominent minister in Stephen Harper’s government and a talented and shrewd politician, Kenney shifted from the federal to provincial arena a few years ago. He succeeded in rapidly uniting his native Alberta’s political right under the United Conservative Party banner through sheer force of will, then won a commanding majority in April 2019 to become premier.

Kenney has become the de facto captain of Canada’s Conservative premiers, both embodying and stoking the economic angst and antipathy toward Ottawa that propelled him into the premiership and animated much of the recent federal election campaign.

He just concluded a tour of the capital, meeting with federal leaders and delivering a high-profile speech to the Canadian Club to make the case for Alberta, in a new and carefully calibrated “I’m not angry, just disappointed” tone. But at the same time, his popularity in his home province has waned recently thanks to ruthless budgeting and some controversial moves.

Even still, Kenney is one of the most visible conservatives in the country at the moment. But in that same fortuitously timed year-end interview in which he stumped for Ambrose minutes after Scheer announced his resignation, he offered what sure sounded like a categorical dismissal that he would seek the federal leadership. “I have absolutely no intention of doing that. I’m totally focused on this job,” he told the Calgary Herald. “I’ve always found these conspiracy theories frankly hilarious—that for some reason I left federal politics in order somehow to go back to it after three years. It makes no sense to me.”

The former veterans affairs minister in Harper’s government may be the closest thing to a declared candidate in this fast-shifting landscape, after CBC reported that the night of Scheer’s resignation announcement, O’Toole told fellow Tories at a private Christmas party that he was going to take another run at the leadership.

In 2017, O’Toole finished third (behind Maxime Bernier) in the leadership race in which Scheer won the title by the skin of his milk-fortified teeth.

A former Royal Canadian Air Force captain, O’Toole has been highly visible of late as his party’s foreign affairs critic. He also represents the GTA riding of Durham, which means he’s rooted in an urban part of Ontario where his party was utterly trounced on Oct. 21, and where it has to make serious gains if it hopes to boot Trudeau from office and eventually win a majority.

Of course, given the intensely polarized regional nature of Canadian politics at the moment, that also means O’Toole comes from the wrong side of the tracks (the tracks being, let’s say, the western border of Manitoba), which may inspire narrowed eyes rather than enthusiasm in the Tories’ Prairie stronghold.

The “I Guess Weirder Things Have Happened?” Suggestions

And then there was this list drawn up by Toronto Sun columnist Candice Malcolm:

About half of that list reads as wild-eyed fan fiction or a full-on fever dream, but to be fair, she did stipulate that she was being deliberately fanciful.