Politics Insider for Dec. 2: The procurement minister shows off the country's pandemic purchases, the Department of Finance loses its top bureaucrat and watch out for salmonella-spreading hedgehogs 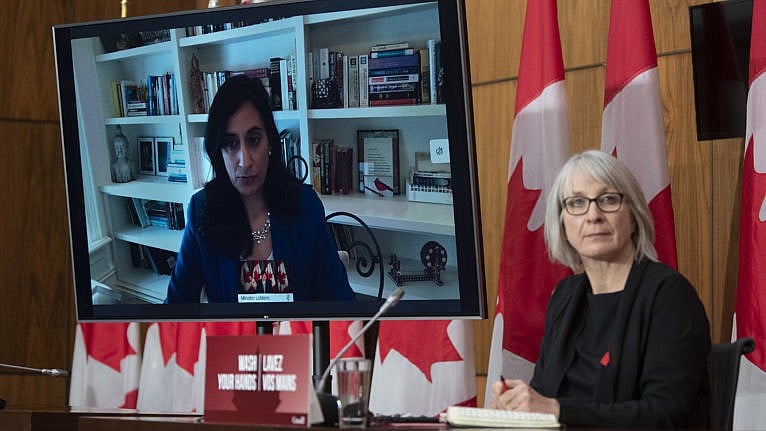 Public Services and Procurement Minister Anita Anand responds to a question via video conference as Minister of Health Patty Hajdu looks on during a news conference Tuesday Dec. 1, 2020 in Ottawa. (Adrian Wyld/CP)

It took a pandemic and a prolonged spat about vaccine preparedness for the federal government to show off a shopping spree that produced a pile of new freezers. Yesterday, Procurement Minister Anita Anand told reporters her department has procured 126 cold and ultra-cold storage freezers, 34 of which are already on Canadian turf. They’ll eventually store up to 33.5 million doses of COVID-19 vaccine, which’ll be administered using syringes, needles, gauze, swabs the feds have already bought. Anand’s point: Canada didn’t start preparing for the vaccine rollout yesterday. The feds are on it.

Those assurances mean little to Conservatives in Ottawa. At a press conference, finance critic Pierre Poilievre claimed Canada would fall “behind billions of other people around the world” in getting inoculated. The party’s leader, Erin O’Toole, berated Prime Minister Justin Trudeau in question period for failing to sign contracts with vaccine manufacturers fast enough (watch their fiery exchange). At her presser, Anand disagreed. She said Canada was “one of the first countries” to sign with Moderna, the fourth to sign with Pfizer and the first country with no domestic manufacturing capability to sign with AstraZeneca.

(Check out the Maclean’s vaccine tracker that monitors each leading candidate’s progress.)

The feds have premiers nipping at their heels. Earlier this week, Ontario Premier Doug Ford said he was touching base himself with the manufacturers as he searched for answers on when Ontarians will see a vaccine. “There’s something going on,” said Ford. “Either someone isn’t being honest or there is incompetence, maybe both.”

Premier approval: Speaking of the first ministers, the Angus Reid Institute posted its latest provincial approval ratings. See if you can guess, before looking at the chart, which premiers have the highest and steadiest ratings—and which are now dipping. Suffice to say dissatisfaction is growing on the Prairies.

Paul Rochon will soon be out as the deputy minister at the Department of Finance. The National Post broke the news that Rochon, the FinMin’s “right-hand man” who was appointed to the influential post by former prime minister Stephen Harper in 2014, will leave within two weeks. The timing of Rochon’s departure note to staff, sent the day after the government’s fiscal update, is conspicuous.

More than a century after he died fighting the First World War, Pvt. John Lambert‘s remains were finally identified by Veterans Affairs Canada. Lambert, a Newfoundlander who at 16 years old lied about his age to enlist in the army, died of his wounds on Aug. 6, 1917 during the Battle of Langemarck. In 2016, his remains were unearthed and last November, they were identified after “historical, genealogical, anthropological, and DNA analysis.” He’ll be buried at the New Irish Farm Cemetery in West-Vlaanderen, Belgium—which is visible thanks to this 360-degree tour.

On Monday, as the fiscal update hoovered up all the federal headlines, Treasury Board President Jean-Yves Duclos tabled the annual tomes known as the Public Accounts of Canada. This is where every cent of government spending is accounted for, from billion-dollar transfers to the cost of lost USB keys. Volume III is where you’ll find a line-item listing of all $2.6 billion in settlement payouts—$2 billion of which is under the umbrella of Indigenous Services Canada. Deep in the same volume, the National Research Council notes the theft of 31 laptops, valued at $41,485 that’ll never be recovered.

Exporting bureaucracy: Global Affairs Canada is hiring a contractor that can help transform Peru’s civil service into a professional, non-partisan outfit that looks a little more like Canada’s public service. The RFP positions Peru as a potential economic powerhouse hindered by its own largest employer: the government. “Given the size and duration of its exceptional economic growth in the past 15 years, Peru could have made significantly more progress, however, the country has not reached its potential owing to many factors, including an inefficient civil service.” Cue the jokes about Canada running an efficient government.

Someone at the Public Health Agency of Canada isn’t working exclusively on the pandemic. A public alert yesterday reminded Canadians that hedgehogs might give them salmonella. “Kissing and cuddling a hedgehog can spread Salmonella to your face or mouth and make you sick,” reads the notice, which says 32 cases have been reported since 2017—and the U.S.-based Centers for Disease Control is investigating similar outbreaks. Wise words from the bureaucrats: “Hedgehogs may not be the best choice for every family.” (The $320-million box office haul of this year’s Sonic The Hedgehog, released on the eve of the pandemic, might prove a certain spiky hero is fun for the whole family.)