At the Manning Conference, an alarming view of Islam

A panel on 'Islamist Extremism' in Canada offered up some spurious claims, but found an audience at the Conservative event 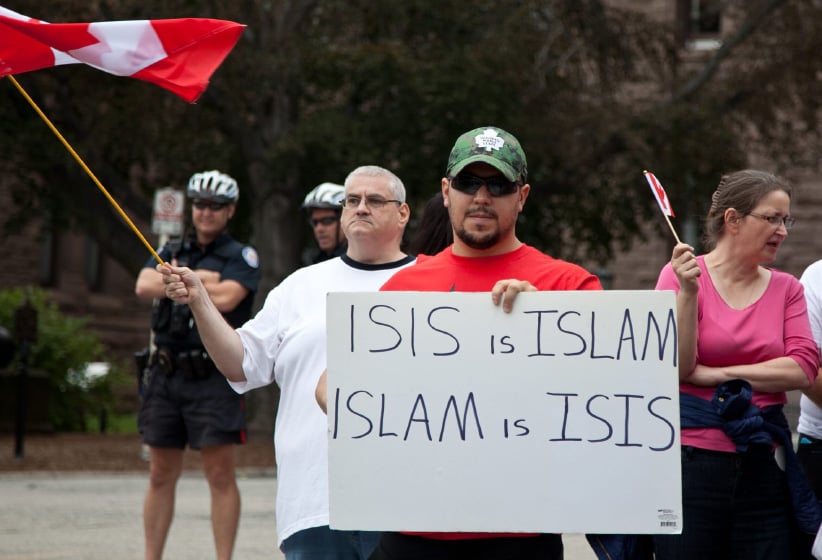 The Manning Centre Conference, the pre-eminent gathering of Canadian conservatives, opened in Ottawa on Friday morning with a panel discussion that sounded a stark note of alarm, with a contrarian streak: Islamic extremism exists in Canada, and to believe otherwise is dangerous naiveté.

The discussion was billed as “Leading the Response to Islamist Extremism and its Ideology in Canada,” one of the break-out sessions planned by the Manning Centre, which provides research, training and networking for Canadian conservatives.

The morning panel featured Raheel Raza, president of the Council for Muslims Facing Tomorrow, which describes its mission as “oppos(ing) extremism, fanaticism and violence in the name of religion,” and Thomas Quiggin, a self-styled security and terrorism expert who runs the Terrorism and Security Experts network.

Raza kicked things off by noting wryly that the session had generated intense and sometimes incredulous advance interest. “I’ve had some reporters call and ask me very innocently, ‘Why a panel on Islamist extremism?’ as though the problem doesn’t exist in Canada, just like our current government seems to believe,” she said. Hiding from reality is a mistake in dealing with “the global jihadist insurgency,” she admonished.

Raza described her years growing up in Pakistan as very different from today: pluralistic, egalitarian, with few women veiling themselves. That began to change through the 1970s, and by 1988, her family fled for the secular openness and equality of Canada, she said—only to then feel the same forces rising around them. “During the course of our settlement process, we had the uneasy feeling that the rise in extremism that we had run away from and that we had left behind was slowly creeping into the west, and in Canada as well,” Raza said.

She cited doctored copies of the Koran now distributed in downtown Toronto, statistics on Muslims who express survey support for various aspects of Sharia law and a Toronto-area school board holding Friday prayers and allowing students to take time out of class to pray. She criticized M-103, the private member’s motion that aims to tackle Islamophobia in Canada. “This is of great concern to me as a Muslim, because it gives the impression that there is institutionalized and constant racism against Muslims in Canada,” she said.

When it was Quiggin’s turn at the microphone, he outlined the two camps he believes are engaged in the “global struggle for the soul of Islam.” On one hand are “modernist, humanist, secular Muslims who are trying to take Islam, infuse it with democracy and science and drive it into the future,” he said. On the other are “the Islamists: those people who seek an unceasing, violent struggle which essentially wants to drive Islam into the past,” he argued.

RELATED: The race to the political bottom

He identified the Muslim Brotherhood as the key global driving force behind the latter, and traced the tentacles of its supposedly powerful influence in Canada. He claimed these include the Muslim Students Association, which has chapters at many Canadian colleges and universities. Quiggin described its umbrella organization on Friday as a “front group” originally founded by members of the Muslim Brotherhood. By way of supporting his claims, he mentioned a half-dozen Canadians who had been charged, convicted or alleged to have participated in terror attacks, or who were missing and presumed to be involved with ISIS, and had at one point belonged to chapters of the MSA.

One of these student associations came under scrutiny after a handful of former members were arrested for terror-related offences. There is no evidence supporting his broader claims.

Quiggin also said that during an awareness week in 2015, the MSA at York University handed out a booklet about women in Islam, which included a chapter on “wife disciplining”—a phrase that drew disbelieving chuckles from the crowd—that recommended physical abuse. There is at least one photo on the MSA’s Facebook page of the book in question – whose full contents are available online and align with Quiggin’s description – displayed on a table at one of the organization’s events.

However, Quiggin’s various research conclusions and work with the obscure TSEC Network have been vehemently criticized by acknowledged security and terrorism experts.

He also attempted to draw an entirely spurious link to Iqra Khalid, the Liberal MP who put forth the private member’s motion against Islamophobia, saying she had been president of an MSA chapter when she was a student. Leaving a verbal question mark hanging in the air, he prompted the audience to guess where she had gone to school, before confirming the answer: York University.

He then linked the massive child sexual exploitation ring in the British city of Rotherham—which victimized some 1,400 young girls and was covered up for years before five British-Pakistani men were charged in 2010—to political correctness run amok. He based that conclusion on comments from the MP representing Rotherham, who spoke of “a culture of not wanting to rock the multicultural community boat.” When Quiggin read that quote from the stage on Friday, a well-dressed woman of about 50, sitting next to a young teenage boy in the audience, gasped in disgust and shook her head repeatedly.

Quiggin touched on a point that Raza had made as well, questioning why public schools in the Toronto area—he claimed 17 or 18 high schools in Mississauga do this, along with others—hold Friday prayers and, he claimed, segregate girls from boys. In fact, it appears Quiggin is conflating one unrelated example—in which a private Islamic religious school separates boys and girls for prayers—with 17 Mississauga public schools that recently backed down in the face of protest and allowed students to write their own sermons for prayers rather than requiring them to be approved by administration.

But regardless of his inaccuracies and misleading connections, Quiggin’s arguments seemed to resonate with at least a segment of the Manning Centre audience. They indulged him by turns with disapproving murmurs and incredulous gasps as he theatrically laid out the supposed creeping influence of Islamist extremism in Canada.

As Quiggin worked himself into high dudgeon over what he claimed was the Islamization of Canada’s public schools, out in the audience, the 50-ish woman once again sighed and shook her head in disgust.