Paul Wells: The PM is permitting his finance minister—the supposed incarnation of his government's fiscal credibility—to be set up. It does not bode well. 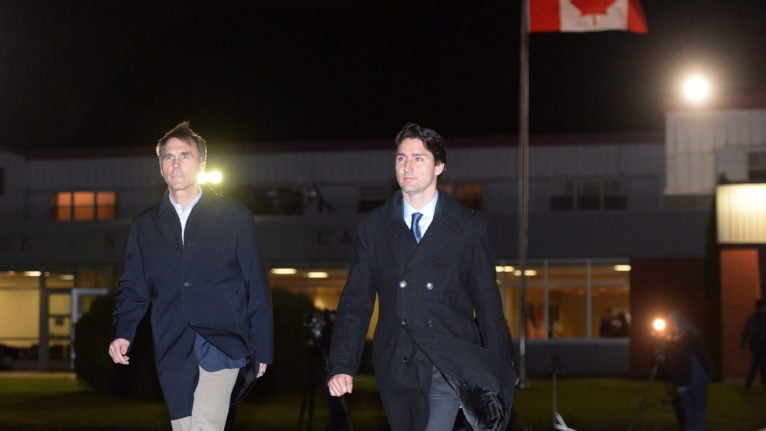 Trudeau and Morneau walk towards their plane as they depart Ottawa Nov. 13, 2015, for the G20 Summit in Turkey (CP/Sean Kilpatrick)

[UPDATE, Aug. 17, 7:55 p.m.: This column, written before Bill Morneau announced his resignation, stands up after with no need for amendment. I’ll simply add two observations based on his remarks at his news conference.

First, Morneau has always believed he could offer talking points in place of answers, and that unshakeable belief continues. He just got fired. It is pathetic to pretend otherwise. Pathetic.

Second, he will be a candidate to be secretary-general of the Organization for Economic Co-operation and Development. Like so much else about this fiasco, this fits a pattern. Justin Trudeau is getting into the habit of peddling his problems to the world. He campaigned for a second mandate for Michaëlle Jean as head of La francophonie, after her spending habits made her candidacy untenable. And he improvised an unacceptable double diplomatic appointment for Stéphane Dion when he got tired of hearing Dion at the cabinet table, forcing France to threaten to veto an EU ambassadorship for the first time in the history of the union.

Laundering his problems on the world stage is getting to be a thing Justin Trudeau does. Eventually the world will notice. Maybe it already has. – pw]

The lesson from Bill Morneau for all remaining Trudeau cabinet ministers is this: you cannot make yourself small enough to be safe. No amount of self-effacement will ensure you stay on as a minister of the crown. If you commit ethical lapses too reminiscent of the Prime Minister’s, any disagreement, even if you expressed them in private, will be used against you in an extended campaign of leaks.

Here’s the suite of stories people who claim to be speaking on Trudeau’s behalf have deployed against Morneau in the past week. Globe, Monday: Morneau “could be replaced.” Bloomberg, Saturday: Morneau’s “too orthodox.” Reuters, Sunday: he “pushed back against other cabinet ministers.” Clearly he’s got to go.

But it’s a funny thing. Add up the articles of indictment nameless PMO sources have read out to a succession of reporters and you find a list of purported differences that were (a) entirely resolved in Trudeau’s favour at Morneau’s expense (and the taxpayer’s, if anyone still notices such things); (b) entirely private—until the Trudeau camp decided to exhume them for reporters’ delectation.

READ: The Battle of Bill Morneau

The Globe story says the PM wants a two-year EI premium freeze in the transition from a Canada Emergency Response Benefit (CERB) to a retooled EI. Morneau, we’re told, wants only a one-year freeze. That’s the first anyone’s heard about the purported dispute. Morneau’s kept shtum about it. On past disputes, we learn Morneau wanted to keep the original post-lockdown 10 per cent wage subsidy and Trudeau wanted to increase it to 75 per cent. Trudeau won that dispute, which was never reported at the time. We learn that Trudeau told Morneau to drop a dumb plan that would have permitted the minister to tax and spend on fiat, without parliamentary approval, through 2021. Frankly I have a hard time believing the plan was Morneau’s idea, but whatever: he dropped it as (purportedly) ordered, never complained. Trudeau won again.

The Bloomberg story repeats some of those claims and adds a new one, that Morneau wanted the CERB to be smaller than $2,000. If that’s true, Morneau lost that one too and has never complained.

Caucus members and cabinet ministers are told, not only in the Liberal party but in every Canadian party and to an extent no parliamentarian in other large countries would ever accept, that they mustn’t air their dirty laundry in public. For the last decade or so, in fact, they have been strongly discouraged from appearing to have independent personalities, social-media personae, social circles or fashion sense. Morneau has followed this advice scrupulously. Fat lot of good it’s done him. He’s spent three days in the last seven reading about his dirty laundry in the papers.

I spent part of the weekend talking to Liberals who worked in the first Trudeau government, are now out of government, and who wish the Liberals well but are freer to speak their mind. They were astonished at what’s going on. “Publicly reproaching a finance minister for wanting to manage finances must be a first in the history of the country,” one said. “Not only is it normal that he be wary of new spending, it’s his job.”

READ: Could Chrystia Freeland save Canada?

The notion that Morneau is a dreary guardian of arid fiscal probity who just doesn’t get how fun it is to spend is surprising if true. Morneau, after all, has never introduced a balanced budget or even one that laid out a plan for reaching balance someday. He ran for re-election on a platform that promised bigger deficits than the ones he’d been running. And, again, he hasn’t been heard to protest at all as spending has, for understandable reasons, skyrocketed this year.

So what’s going on? Obviously there’s Trudeau’s rock-solid “Only One Ethical Liability Per Cabinet” policy. The Prime Minister gets to surprise everyone else, but nobody gets to surprise him. Fair enough. And it’s delicate to eject somebody for ethical blind spots when a former ethics commissioner is using “blind spot” to describe the Prime Minister’s attitude towards the ethics rules. So a pretext is handy.

But there are two other considerations. One, not yet measurable, is the prospect of Mark Carney’s re-entry into Canadian public life. John Ivison will always know more about what Carney’s up to than I do. But my gentle counsel to the former recidivist central banker is this: if he doesn’t want to serve as a reason for wrecking a finance minister’s credibility through an extended stream of purposeless news leaks, it may be getting time to say so publicly. It’s hard to claim “I didn’t know” when the newspapers are printing extra sections with all the details. Presumably Carney can read. He may also want to brush up on old books about how it went for Paul Martin when he permitted himself to be depicted as the hapless innocent on whose behalf others were scheming.

The other thing that’s going on is probably better-intentioned. Progressives naturally dream big, a tendency lately aggravated by months in quarantine. Liberals have been telling themselves the wreckage of 2020 offers a once-in-a-lifetime opportunity to build back better. I first heard this from a friend in government in April, and wrote about it in June. “Justin Trudeau seems to really grasp the immensity of the moment,” one Liberal was telling Le Devoir back then.

Joe Biden, who knows a guy who knows Trudeau, will this week become the Democratic Presidential nominee on a plan to “Build Back Better,” and if there’s one thing a Canadian Liberal likes to do, it’s to pose with a U.S. Democrat while accusing Conservatives of American-style campaigning. But the same language is being used closer to home. In June a bunch of Canadian CEOs, led by Corporate Knights, wrote urging governments to “build back better.” In July the Task Force for Resilient Recovery (known in Ottawa as “the group Gerry Butts is with” released its own report; that group’s website urges “Let’s build back better,” as though the thought hadn’t occurred.

Building back better is, in fact, pretty much the way experts prefer building back to be done. The Sendai Framework for Disaster Risk Reduction, a 15-year international agreement to make the entire planet more earthquake-proof, hurricane-proof, toxic-spill-proof and pandemic-proof, was passed by the United Nations General Assembly in 2015. One of its four principles is to “build back better” after a disaster. This is almost certainly a better idea than building back worse. Probably it’s best not to think of it as a once-in-a-lifetime thing when the same idea occurs to just about everyone after every disaster, though.

The only question is how to do it. The Resilient Recovery report recommends Ottawa spend $50 billion in new measures over a decade toward a greener economy, defined five ways. Corporate Knights shoots for the moon, suggesting $100 billion, again over a decade. So the two groups suggest a burn rate of $5 or $10 billion a year. Even by pre-COVID standards, these are not large sums. It is simply not credible that, having signed off on a $342-billion deficit this year alone, Bill Morneau would refuse these incremental sums.

He may, on the other hand, have had the temerity to remind the PMO privately that if they spend endless amounts on income maintenance, they will have little left over to build anything. At least, I kind of hope somebody mentioned that.

The CBC’s Aaron Wherry the other day discerned a historic opportunity for Trudeau, much like the one Mackenzie King faced after World War II. Maybe. It’s true that King ushered in a new role for the federal government in social policy, beginning in the last years of the war, in concert with most other Western democracies during the seemingly endless 1945-1975 boom the French still call “les trente glorieuses.”

It’s always a good idea to read the fine print. King won his 1945 re-election where Winston Churchill lost his because King better understood that his most dangerous electoral competition was on the social-democrat left. In the 1943 Ontario provincial election the CCF, an NDP predecessor, went from zero seats to 34, pushing the governing Liberals to third place and inaugurating four decades of red-Tory Progressive Conservative government in King’s home province. King could pivot. Churchill couldn’t, and lost to Labour and Clement Attlee. It was easy to pivot because previous governments, including several of King’s, had done so little on social policy. The field wasn’t crowded.

In 2020 it’s hard to see electoral risk to the Trudeau Liberals’ left, and any policy field they would seek to move into would already be crowded. I could swear the Liberals have already made some investments in green infrastructure. Perhaps the closer historical parallel is not to King but to a more recent Liberal. In 2018 Kathleen Wynne’s Ontario Liberals spent billions they didn’t have to fix problems they hadn’t noticed during a decade in power, believing they could fight back the Conservatives by announcing continued Liberal government had become necessary in a half-dozen social policy fields.  They didn’t just lose the next election, they racked up the worst loss for a provincial Liberal party since Confederation. As did their distant relatives next door in Quebec. Both parties were running against right-of-centre parties led by men they considered dolts. The good news is, now both provincial parties have a once-in-a-lifetime chance to build back better.

Politics is art, not physics. I have no idea what will happen in the next election. But worrying about the 2019 election was what got Trudeau into the SNC-Lavalin mess. Pursuing a “binary choice” in an environment where absolutely nobody would tell him to his face that a bad idea was a bad idea was what got him into the WE mess. He is turning out to be a man who tightens his circle more often than he expands it, as dozens of former Liberal Senators and Stéphane Dion and John McCallum and Jane Philpott and Jody Wilson-Raybould can attest. He has spent half a decade at least pretending that Bill Morneau was the incarnation of his government’s fiscal credibility, and the way he is permitting Morneau to be set up suggests he hasn’t given a second’s thought to consequences. And that nobody around him has the wit or the guts to do it for him. Yet again.