Politics Insider for Sept. 11: The former finance minister violated the Elections Act, Wexit turns against Erin O'Toole, and Donald Trump retweets a joke at his own expense 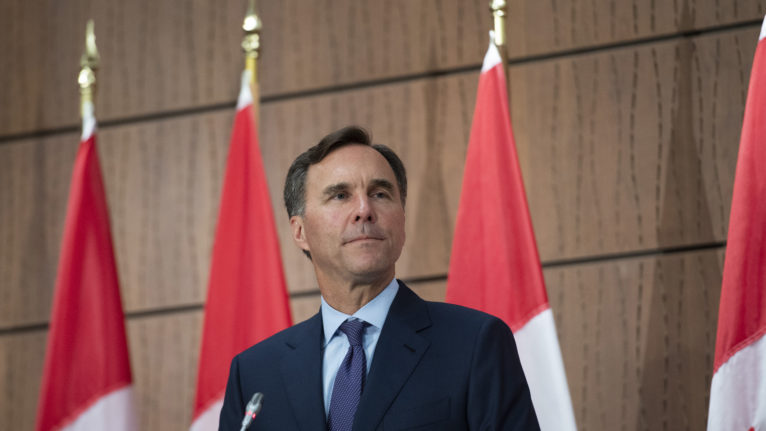 Minister of Finance Bill Morneau announces his resignation during a news conference on Parliament Hill in Ottawa, on Monday, Aug. 17, 2020. (Justin Tang/CP)

You can take Bill Morneau out of politics, but politics isn’t ready to leave Bill Morneau. The commissioner of Canada elections, Yves Côté, slapped the former FinMin with a tiny $300 fine for violating the Elections Act last fall. At a speech to the chamber of commerce in Oakville, Ont., Morneau took a moment to pump up the campaign of local candidate—now procurement minister—Anita Anand. They also posed together in photos. That’s a no-no for a sitting minister who’s forbidden from using the public purse for partisan purposes. Morneau was required to post about the admonishment on social media, which he did.

As Morneau broke the rules, one of his cabinet colleagues creatively stayed within them. Just two days before the election call, as Liberals sprinkled spending across Canada, then-foreign minister Chrystia Freeland doled out more than $200,000 to a union in Windsor, Ont., for apprenticeship training. Sandra Pupatello, the high-profile local get for the Liberals, joined Freeland at the event. Pupatello’s campaign insisted Windsor would have a seat at the cabinet table, and more federal dollars, if she won. Her visibility at that funding announcement was no doubt calculated—but absolutely within the rules.

WE is leaving. The Liberals’ troubles are not. On the heels of WE Charity’s dramatic decision to wind down Canadian operations, the notion that the summertime political drama will all just fade away is doubtless tempting to Liberals and their friends. But as Marie-Danielle Smith writes in Maclean’s, several key questions about decisions made by ministers and their public servants were left hanging by prorogation. Even as the WE empire crumbles, the opposition in Ottawa won’t let up once Parliament is back in session.

A blow for private health care: A B.C. judge has ruled against an orthopaedic surgeon in the province who opened a surgery centre in 1996—and argued that patients should be able to pay for faster health care to avoid even worse problems down the road. Dr. Brian Day‘s fight against certain provisions in the Medicare Protection Act, which includes several patients as co-plaintiffs, stretches back a decade. But in his decision (read all 880 pages right here), Justice John Steeves found that the law does “not deprive the right to life or liberty” of the plaintiffs. The tussle’s next stop could be the Supreme Court in Ottawa.

The new Conservative leader’s overtures to Western Canada have gone over like a lead balloon among the Wexit set. “It didn’t take long for Erin O’Toole to throw the West under the national bus in hopes of winning those ever so precious votes from Central Canada,” read a Wexit fundraising letter that slammed O’Toole’s “fast capitulation to the international climate crowd” after he committed to the Paris Agreement goals. The Tories, reads the letter, are even worse for the West than the Liberals because they take every vote for granted. The only way ahead, say the Wexiteers? Total regional domination.

Canada is a trading nation: Over at Fort Pearson, the bureaucrats at global affairs were curious about the national mood on international trade. So they paid the Ekos polling firm to ask 2,089 of us for our thoughts. The final report, recently published online, concluded that Canadians “remain unified and bullish” on trade—and the results show “remarkable stability in positive attitudes” that buck a global uptick in protectionism. The love-in isn’t without criticism. Forty-two per cent of respondents felt the benefits of trade are “enjoyed almost exclusively by large corporations and wealthy investors.” But Ekos says Canadians, who broadly accept that big companies drive economic growth, “do not appear too bothered by this apparent lack of equity.”

Kevin Grandia, a Vancouver-based climate activist who heads up a progressive comms shop, lived out a bizarre viral episode on Twitter yesterday. Grandia posted an “offhand tweet trying to be funny” that featured an unflattering photo of President Donald Trump playing golf. “Saw Not Fat trending,” he wrote, “and totally thought it was something Trump said.” In a bizarre twist, the president retweeted the joke made at his own expense. “I’m so confused,” wrote Grandia, who used the burst of engagement to give some attention to World Suicide Prevention Day. Hours later, the retweet mysteriously remained.

Isn’t ‘retreat’ a bit defeatist? Yesterday, Prime Minister Justin Trudeau announced a cabinet retreat in Ottawa starting next Monday. CabMins will focus on what you think—the pandemic, the Throne Speech, and how to “build back better”—as they cobble together a “detailed vision for the future.”