Politics Insider for March 27: Chrystia Freeland said Canada was 'strongly opposed' to a Trump administration proposal to militarize the frontier. What a first day for Canada's new top envoy in Washington. 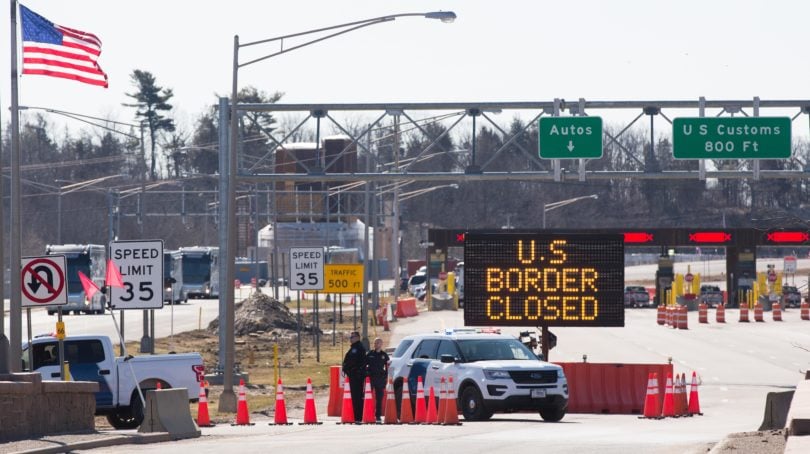 U.S. Customs officers stand beside a sign saying that the US border is closed at the US/Canada border in Lansdowne, Ontario, on March 22, 2020. (Lars Hagberg/AFP via Getty Images)

“The longest undefended border in the world” was always a bit of a misnomer. Border guards on the Canadian and American sides stand in the way of most visitors (the union representing the Canadians calls its members the “first line of defence”). Americans fly a small fleet of drones up and down the vast border, imperceptible to the naked eye at ground level. But there is a broader point: armies aren’t staring each other down. Most people cross without delay.

As ever, the Trump administration, which once declared Canada a national security threat, challenges the status quo. The Nation posted leaked documents that suggest the Department of Homeland Security asked for military backup on the Canadian frontier. Global News reported that officials “inside the White House” favoured the move. The apparent threat is irregular border-crossers (who cross into the U.S. at a much lower rate than in the reverse direction).

Yesterday, Prime Minister Justin Trudeau confirmed the story in a very few words—and later, Deputy PM Chrystia Freeland used stronger terms, telling reporters the feds are “strongly opposed” to the notion, and have made that ” very clear” to the Americans. By nightfall, the Wall Street Journal reported the Trump administration had dropped the proposal.

It was, all told, a heck of a first day on the job for Kirsten Hillman, the interim ambassador to the U.S. who’s officially the permanent envoy. Hillman has a wide variety of fans, including former PM Stephen Harper.

A new poll published by Public Square Research says Canadians are more confident than Americans or Brits in the federal government’s ability to guide the nation through the coronavirus crisis. But dig a little deeper and Canadian attitudes defy the stereotype.

While Canadians seem less worried, their confidence in government may have led to a lack of interest in helping others through the outbreak. Canadians admitted to being less likely to share supplies or help their friends and neighbours than Americans or the Brits. It is a finding that surprised Heather Bastedo, the poll’s principal researcher, as Canadians are stereotypically known as polite and willing to lend a helping hand.

Peter MacKay chases a Pyrrhic victory: Most Tory leadership candidates have put the brakes on their campaign, urging the party to delay the vote to crown a new leader. MacKay is doubling down—loudly on social media yesterday—on the alternate view that his party must elect a new boss asap. He has one champion in the nation’s op-ed pages. Andrew MacDougall, writing in Maclean’s, wonders if MacKay has “lost his mind.” He has a theory on MacKay’s motivation:

I reckon MacKay is now doing and saying what he thinks the party membership wants to hear, not what he thinks actually should be done. Either he or his advisors have been spooked into this new course after spending the first half of the leadership campaign appealing to the broader Canadian population and watching O’Toole gain momentum with the voting membership.

On CBC’s Power and Politics yesterday, MacKay replied with this: “That’s a ludicrous statement from a guy who’s not even living in Canada.” The perceived frontrunner said thousands of people have told him the race should proceed. Late last night, the Conservative party announced all future debates, and the vote itself, were cancelled. New dates are to be determined.

Public-health diplomacy: Conservatives are now attacking the Trudeau government for shipping 16 tonnes of medical equipment to China in February as the coronavirus epidemic exploded in that country. The Globe and Mail indulged the critics, which prompted Tory leader Andrew Scheer to fire off a statement calling the news of the donations “outrageous.” (The donations were no secret at the time.) Erin O’Toole slammed the aid as Liberal “negligence” that is “endangering” lives. Less than two hours after O’Toole’s tweet, CTV’s Evan Solomon reported that China would, in fact, be “sending back more medical equipment to Canada” than the country received last month.

Iran’s latest promise to send black boxes from Flight 752, made two weeks ago, has still gone unfulfilled. Foreign Minister François-Philippe Champagne, who has said the coronavirus outbreak shouldn’t get in the way of justice for the victims’ families, isn’t forgetting about Iran’s assurances—though it’s unclear how anyone will force the regime into action.

This morning, the parliamentary budget officer will publish a report on the “potential economic and fiscal implications of the COVID-19 pandemic and recent oil market developments.” Prepare yourself for scary analysis.

Blast from the past: As politicians at all levels shelve their personal spats for another day, the Supreme Court of Canada reminded us all of the old days when Ontario’s premier and Toronto’s mayor duked it out over the size of city council. The city complained the province didn’t have the right to reduce the size of Toronto council. The province plowed ahead. At 9:45 a.m. yesterday, the top court stoked the embers of that fight: the judges will soon hear arguments from both parties.