Canada inks more vaccine deals. Will it be enough?

Politics Insider for Sept. 1: Johnson & Johnson and Novavax are the latest pharma companies to promise doses to Canada, a rent relief program hangs in limbo and here's how Erin O'Toole won the Tory crown 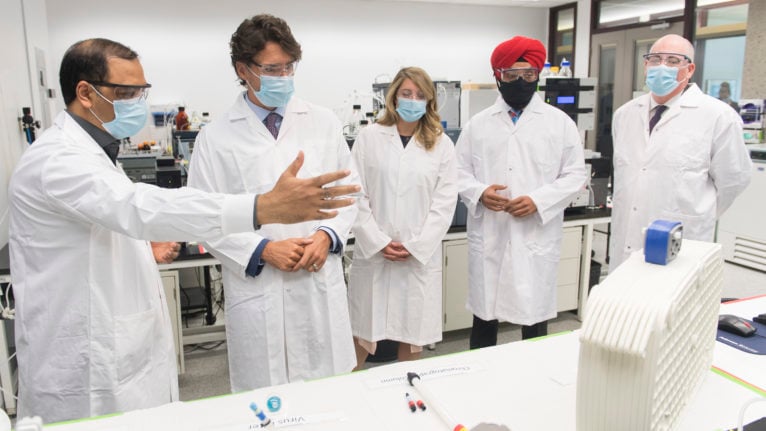 Make that four contracts signed for possible COVID-19 vaccines. The feds have inked deals with Johnson & Johnson and Novavax, a pair of pharmaceutical companies whose potential vaccines—Ad26.COV2.S and NVX-CoV2373—are among the leading candidates worldwide. Canada has secured 38 million doses of the Johnson & Johnson vaccine and 76 million of Novavax’s candidate. That’s in addition to a combined 76 million doses from two other candidates, made by Pfizer and Moderna, currently in the midst of clinical trials.

Procurement Minister Anita Anand says the combined total doses could reach up to 190 million—assuming, of course, the vaccines clear trials and are declared safe and effective by federal regulators. Amir Attaran, a bioscientist who has slammed the government for moving too slowly on buying up vaccines, worried the Novavax candidate—still in early stages of trials—confirms his fears that Canadians “should not expect this to end well.”

Anxious commercial renters received little clarity from the feds yesterday on the future of a federal-provincial rent-relief program that was set to expire at the end of August—and which many landlords and tenants complained was too complicated to be effective. Finance Minister Chrystia Freeland did announce an extension of the Canada Emergency Business Account, a key source of liquidity for revenue-starved entrepreneurs. But she was mum on the future of the rent-relief program, apart from saying she and her provincial counterparts are “working on it,” and will “have more to say about it very soon.” The Globe and Mail later reported the program would not be renewed.

Just in time for the rent program’s planned wind-up, the parliamentary budget officer published its estimated cost. PBO Yves Giroux pegged the price tag this year at $931 million, a little more than one-third of the $2.4 billion budgeted by the feds on its mega-list of COVID-19 spending totals.

How did Erin. O’Toole win? The Tory leadership’s final ballot results tell a simple story. O’Toole won by scooping up the second-choice votes of the social conservatives vying for the party crown. But a detailed breakdown of the riding-by-riding results reveals the power of so-con voters, the regional dynamics that pushed O’Toole over the top and the eye-opening rise of Leslyn Lewis, a one-time candidate with little profile before 2020.

Lewis’s second-ballot performance might have briefly made both of her rivals nervous, even if she ultimately fell short. The upstart third-place finisher nabbed 30 per cent of total available points before dropping off. But that included a dismal performance in Quebec, where she won just a single riding on the second ballot and topped 30 per cent in just seven ridings. In the rest of Canada, Lewis leapfrogged O’Toole and finished just a hair—0.44 percentage points—behind MacKay.

New Brunswick’s PCs are on track for a big win: 338Canada’s Philippe J. Fournier commissioned a poll from Mainstreet that took the temperature of the province’s voters. Writing in Maclean’s, Fournier projected the results if the election, set for Sept. 14, were held on Aug. 27. He found that Premier Blaine Higgs‘s bet on a mid-pandemic election might pay off.

The Angus Reid Institute’s latest poll on premier approval ratings welcomed Newfoundland’s new leader with a thud. Andrew Furey‘s first approval rating clocked in at 34 per cent, good enough for the title of Least Popular Premier. The full report makes clear that only 10 per cent disapprove of Furey, which leaves a whopping 55 per cent on the fence. B.C.’s John Horgan tops the list at 69 per cent. Doug Ford, whose pandemic bounce appears to be holding, sits second at 66 per cent. This gang of governmental guys could be in for a rancour-filled reckoning in the next poll, after millions of kids head back to school.

Three RCMP intelligence analysts claim in a new lawsuit that senior Mounties ignored warnings about Cameron Ortis, a top official in national intelligence coordination until the Mounties accused him of selling secrets to foreign powers. The suit claims Ortis “bullied and undermined” the plaintiffs “in an effort to drive them out and replace them with ‘individuals over whom he had a greater level of personal control.’ ”

Speaking of spies: Seventy-five years ago this week, Igor Gouzenko famously defected from the Soviet Union and turned over evidence that Canada’s future Cold War foe had cultivated a spying operation from its Ottawa embassy. Gouzenko and his family lived at this relatively nondescript building in Centretown across from Dundonald Park.