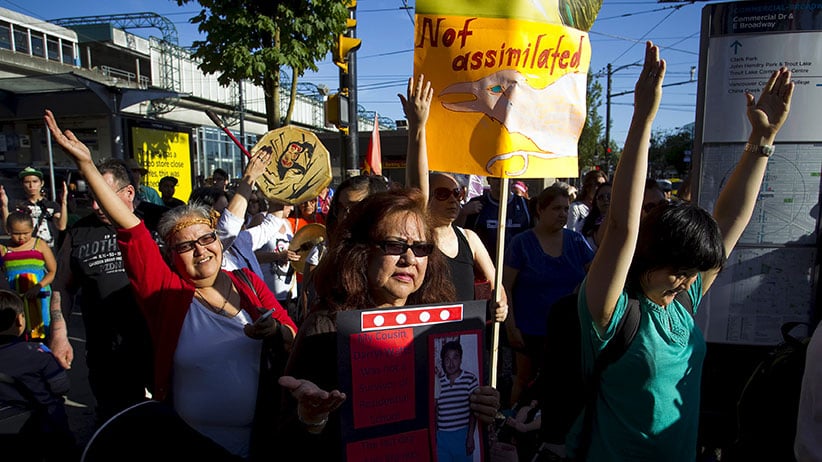 Finding that perfect line between the treacly sentimentality of public cliché and the joyless buzzkill of hard-edged reality is not easy during  the festivities around Canada’s 150th, or, as I’ve come to think of it, the “Plus 150,” which is, at the very least, an acknowledgement that the First Peoples of this land have been here for thousands of years. Everything is political in Ottawa, including celebrating the brilliance of our Canadian experiment in democracy. Being sensitive to the passionate emotions and the history surrounding the day is hardly a sign of spineless political correctness, but a genuine recognition that Canada is undergoing  a fundamental identity crisis as we try to fuse where we come from with where we want to go.  We have never been as confident or as confused as we are right now.

On the outside, Canada is asserting a newly poised voice on the global stage, one the Foreign Affairs Minister Chrystia Freeland explicitly outlined in her widely quoted speech on Canada’s new direction. “The fact that our friend and ally [the United States] has come to question the very worth of its mantle of global leadership, puts into sharper focus the need for the rest of us to set our own clear and sovereign course,” Freeland stated. “For Canada, that course must be the renewal, indeed the strengthening, of the postwar multilateral order.” Freeland, a brilliant thinker who has unsurprisingly emerged as one of the strongest and most trusted ministers in the cabinet, argued that a dependence on the US for security and leadership threatens to turn Canada into a “client state.” It was a startling statement both for its brazen confidence and its implicit criticism of the Trump administration. The Canadian government followed on that speech with a long term promise to invest tens of billions of dollars into the military, though the promises are back loaded until after the next election.

Still, judging from the amount of international attention that speech received, it affirmed one thing: Canada is having a “moment”—which is, arguably, a genuine form of soft power. At Plus 150, Canada appears to have got some national formula right—an inclusive, confident, multicultural society that has rejected a xenophobic populism and embraced the 70 year old multinational vision of small L liberalism, matched with a growing economy. Okay, slow growth at best, but still, it all stands in high relief to Donald Trump’s more paranoid isolationism, his partial ban on immigration, his desire to build walls and pull out of international treaties. Contrast works in politics.

Meanwhile, Justin Trudeau is the first Prime Minister to actively try to turn himself into a brand, making headlines around the globe for his championship of feminism, his support of free trade and multilateralism. Heck, even his carefully choreographed runs, photo bombs and colourful socks make international news, a protein free style of reporting to which, thankfully, most of the Ottawa Press gallery are highly allergic. Should he really be manspreading on the cover of a Delta airlines in-flight magazine? That looks strange and desperate, but there’s no question, the guy is in high demand and his brand, “Just Embrace It,” is a message that a polarized world is eating up. It’s 2017 and maybe digital diplomacy and national identity really do mean, “If you’ve got, it flaunt it.”

Or maybe not. Inside Canada, our identity is not nearly as confident and that brand not nearly as solid. Not only has the Liberal government’s and Trudeau’s popularity fallen in recent polls, there is genuine doubt about what’s actually been delivered in the past two years. This is a federal government that openly adopted the same soaring rhetoric of Barak Obama, but is perilously close to delivering the same diminished reality.

For example, the limp failure to deliver on the promise that “2105 would be the last federal election conducted under the first-past-the-post voting system” was exacerbated this week by the PM’s disingenuous excuse that it was all the opposition’s fault. The truth is, the opposition made a  tremendous effort putting forward various options and  worked faithfully to change the system, but it was all a ruse. Trudeau always preferred one system—the ranked ballot—and was not prepared to accept any option but his own. It was about as obvious a promise break as there could be, like snapping a branch to make firewood and journalists like Andrew Coyne, who went on to savage Trudeau for his dissembling in a brilliant column, practically choked on the smoke as it emerged from the PM’s mouth.

The First Nations’ file has been another example of the Canadian identity crisis, one where the gap between the rhetoric and the reality is growing. When a group of activists tried to erected a teepee on Parliament Hill before July 1, it immediately turned into a confrontation with police. Eventually the tepee was given a place and to assuage tempers, the Prime Minister and Sophie Gregoire Trudeau made a surprise visit. It was a smart and sensitive gesture and reflected a genuine passion the PM has for First Nations issues. “Today I visited the protest tipi on Parliament Hill,” Mr. Trudeau tweeted out afterwards. “The painful fact behind this protest is that for far too long there’s simply no space for Indigenous Peoples to be heard in Ottawa. We took some steps to fix that last month by dedicating 100 Wellington street, across from the Hill, as a space for Indigenous Peoples.” He went on to say that “breaking free from colonial structures is something we’ll do together” even if “we might not always agree in discussions or on the path forward.”

If it was genuine and compassionate in tone, Cindy Blackstock, the Indigenous activist for the rights of children, saw it as just another example of political rhetoric. I wrote to her about it and her detailed responses are worth reading in full, especially in contrast the PM’s short twitter statements on the subject.

Q: Has Justin Trudeau lived up to his reconciliation promise?

Blackstock:  In symbols, yes. In substance, no. Aboriginal Day was a good example. Change the name to “Indigenous Day” and then vote against full gender equity in the Indian Act. Follow that by announcing an appeal of the Canadian Human Rights Tribunal decision regarding Jordan’s Principle (to ensure First Nations children have equitable access to all public services) two days later. The child welfare case is another good example. Equity in child welfare was the number one Truth and Reconciliation Commission call to action and the PM said he would implement them before he was elected. Several months after he took power the opportunity to make good on that promise came in the form of the Canadian Human Rights Tribunal decision that Canada’s failure to provide equitable child welfare services and ensure equitable access to other public service amounted to racial discrimination against 165,000 children. The Tribunal ordered the government to cease the discrimination and the Ministers of Health and Justice welcomed the decision and then failed to implement it. The Tribunal is so unsatisfied with Canada’s compliance that it has issued three non-compliance orders and another is expected shortly. While the government says “it is working hard” and the situation is “complicated” it ignores very clear direction from First Nations communities and the Tribunal on how to comply.

I am not a politician but I have no idea why ignoring legal orders to stop discriminating against little children makes sense particularly when the government has no problem spending money on less worthy, and more expensive, projects.

I have written two letters to the Prime Minister urging him to play a personal role in ensuring Canada complies with the Tribunal’s decision.  He has not responded.  I pray he does the right thing and stops another generation of First Nations children being unnecessarily removed from their families due to government neglect.

Q: What does the government’s appeal of the decision to change aspects of the Indian Act that discriminate against women tell you?

Blackstock: It makes the Government’s statements about supporting feminism symbolic. It is not enough to have a gender balance in cabinet whilst fighting to preserve gender discrimination in federal legislation.

Q: What is your message to Canada for our future?

Blackstock: You are the people of this period. The ones who know about the injustices facing First Nations, Metis and Inuit peoples and have a historic opportunity to set the country on a path where Indigenous children never have to recover from their childhoods and non-Indigenous children never have to say they are sorry. Not sure where to start? Read the TRC report and go to fncaringsociety.com and find seven free ways you can help.

Blackstock’s words express a turmoil about our national identity that remains deeply unresolved and in contrast with the confident face we put out to the world. Our reality has a long way to go before it catches up with the rhetoric. At Plus 150, Canada is having the exact identity crisis it so desperately needs.