Canada pre-purchases COVID-19 vaccines, but won't say exactly how many

Politics Insider for Aug. 6: The feds buy 'millions' of eventual vaccines from Pfizer and Moderna, the Tories want another WE probe and Jimmy K just won't give up 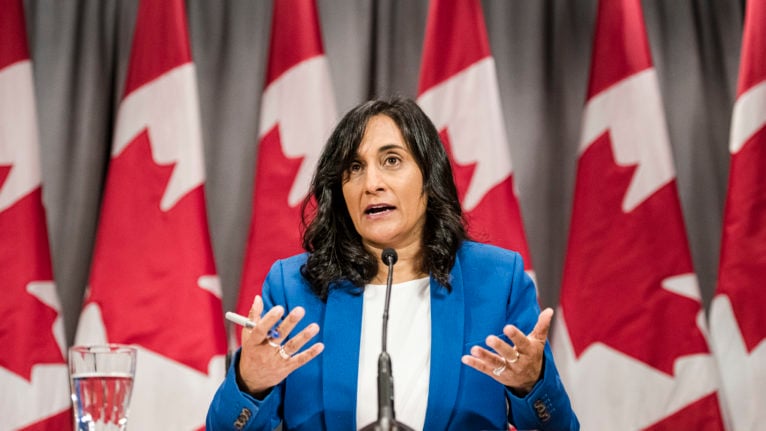 Governments typically top-load their press releases with good news. But when Procurement Minister Anita Anand announced agreements with potential vaccine providers, the details were buried deep within her release. Anand certainly doesn’t want to say much about the federal deals with Pfizer and Moderna, which she says will “secure millions of doses of COVID-19 vaccine candidates.”

A day after Theresa Tam poured cold water on a vaccine as a pandemic panacea, reporters asked Anand just how many millions of doses she’d locked in. Anand wouldn’t say, blaming the vagueness on ongoing negotiations with other potential providers. Some government critics say Canada’s moving too slowly on securing future antidotes as international competition heats up, though one expert told Politico that it’s “really hard to pick winners at this stage.”

The feds’ other big announcement yesterday came from Infrastructure Minister Catherine McKenna, who diverted up to 10 per cent of a $33-billion infrastructure program to pandemic priorities. That money will now fund health infrastructure, schools, parks, trails, foot bridges, bike lanes, and disaster mitigation and adaptation projects.

Poking around WE: Conservative MPs Michelle Rempel Garner and Michael Barrett have asked Privacy Commissioner Daniel Therrien to probe WE’s use of students’ personal information (at this point, we’re starting to lose count of the WE-related investigations on the go). The Tories flag the terms and conditions of the IWantToHelp.org site—created to ingest thousands of student service grant applications—which explain applicants’ data may end up on servers outside Canada and subject to foreign laws. That runs counter, say the Tories, to a “reasonable assumption” that personal info is “kept within Canada and will be protected under Canadian privacy laws.”

How polls keep underestimating the CPC vote: Philippe J. Fournier, writing in Maclean’s, noticed that pollsters collectively underestimated the federal Conservative vote in Alberta last year. The party’s average projected vote share on the eve of the election was 59 per cent. But the party actually racked up 69 per cent of votes. Fournier took stock of more recent polls, too, which produce an average Tory vote of only 48 per cent in the province. He allows the Liberals might have picked up some votes during the pandemic, but still wonders: Is there a systemic issue eluding the pollsters?

Jimmy K is back: Never, ever, ever count out Jim Karygiannis. The former MP’s political rollercoaster just whirled around another loop. Karygiannis, a Toronto city councillor since 2014, was first booted from office last November for claiming improper election expenses. He was reinstated by a judge later that month. In June, Ontario’s court of appeal ousted him once again. But yesterday, the persistent Karygiannis—who’s hoping the Supreme Court will ultimately hear his case—convinced a judge to stay the most recent order pending the top court’s next move. So he’s back. For now.

The federal penitentiary known as the Collins Bay Institution turns out to be a hotspot for smuggled contraband. The correctional service seized an impressive haul of banned goods in July, including marijuana, fentanyl, heroin, shatter, crystal meth and MDMA. They also found 23 cigars, 22 cell phones, a roll of black tape and a screwdriver. Officers caught two individuals in the act of throwing assorted things onto the premises. (The prison’s admin building is the last of its kind, built by prisoners in the late Canadian Chateau style and featuring a brilliant red roof.)

This morning at 8:30 a.m., the carillon atop the Peace Tower will ring out 75 times—once a year for every turn of the sun since an atomic bomb fell on Hiroshima (a deadly event for which anti-nuclear activists say Canada should officially express regret). The bell that’ll do the work is the heaviest of them all. It’s known as the bourdon, a hunk of bronze that weighs in at 10,090 kg. Later, at 11 a.m., the dominion carillonneur will play a lighter show with the theme “comfort food“—a fitting meal choice in the middle of an exhausting year.

Will the bells toll for WE? Back at ground level, the Commons finance committee will virtually meet at 11 a.m. to keep studying the failed student service grant. As of your newsletter correspondent’s last check of the meeting’s agenda, the witness list was still to be determined. But this morning, an amended posting includes two officials from watchdog Charity Intelligence Canada: managing director Kate Bahen and director of research Greg Thomson.