Paul Wells: The Trudeau 2.0 government is rattled, introspective and praying to God that nothing bad happens. But they happen anyway. 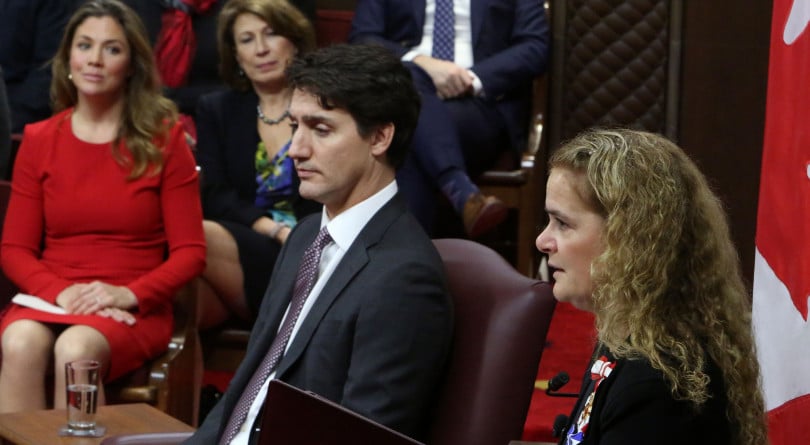 Events, dear boy, events. We are promised a news conference later today with the prime minister, and it’s a good thing too, because the questions are starting to pile up.

Ottawa woke Wednesday to two shocks. At home, news of a shooting in the capital’s residential downtown core. A domestic dispute, it seems; more of a municipal tragedy and outrage than a national one. Further afield, the far graver news of dozens of Canadian fatalities in an airliner crash outside Tehran, as Iran teeters.

From the Prime Minister of Canada, there was the reassuring news that ministers are consulting.

“Minister Champagne”—that’s François-Philippe Champagne, the new foreign minister for files Chrystia Freeland didn’t want—”has been in touch with the government of Ukraine, and is speaking to relevant authorities and to international partners,” Justin Trudeau said in a news release. Transport Minister Marc Garneau  “is also working with officials from Transport Canada, and is reaching out to his international counterparts.”

There is little else a government can do on a day like today, when the one thing you couldn’t have expected is the thing that happens. There’s a peculiar Canadian instinct for blaming Canadian governments when something huge and shocking happens anywhere in the world. It was on ample display after 9/11, when a cottage industry in finding ways to blame Jean Chrétien arose; I worked in those days at the industry newsletter, the National Post. It was silly then and it remains an instinct worth avoiding.

So it is way too early to suggest the Trudeau government is specifically mishandling the aftermath of the chaos in Iran and Iraq, in the wake of the Trump administration’s assassination of Iranian terror boss Qassem Soleimani.

READ MORE: The U.S. has gone rogue, and Canada may be caught in the crossfire

It’s now been 11 weeks since the 2019 election reduced the Liberals to a minority. Seven weeks since the new Liberal cabinet was sworn in. Even over holidays, governments normally do things over the span of seven or 11 weeks. Especially governments that were already in power before an election.

This very government, in fact, was by this point in its first mandate doing things. Navdeep Bains, the minister of silly ministerial titles and innovation, announced the return of the mandatory long-form census barely two weeks after the 2015 election. A month later a massive airlift of Syrian refugees began. John McCallum, the minister then responsible, acted the way you’d expect a responsible minister to act: stood up an agile logistical capability in an office that was still barely staffed, explained the general principles and specific details of his effort to the country, co-ordinated with the Prime Minister’s Office but didn’t sit around waiting for their instructions.

In contrast, the Trudeau 2.0 government has seemed, not merely chastened by the 2019 election result, but badly rattled by it. Its activities—Justin Trudeau’s activities—have been limited to long bouts of introspection interrupted by the occasional phone call to a place somewhere in the world where governments do things, interspersed with the occasional visit by Chrystia Freeland to a province where governments do things.

Here’s what we’ve heard from the PM since Soleimani was killed overnight, last Thursday to Friday. On Friday afternoon, his office said Trudeau “has been closely briefed and engaged on the situation in Iraq, including speaking with Ministers Champagne & Sajjan, the [Chief of Defence Staff], [National Security and Intelligence Advisor], and our US Ambassador among other senior officials.”

On Monday Trudeau started making calls. He telephoned Charles Michel, the new President of the European Council. From the PMO readout, as official summaries of such conversations are called: “They emphasized the need for de-escalation and dialogue, and called on all parties to exercise restraint.”

Then he called Jens Stoltenberg, the secretary-general of NATO. From the readout: “They emphasized the importance of de-escalating tensions and the need to support security and stability in Iraq and the wider region, notably through ongoing counter-Daesh efforts.”

On Tuesday Trudeau called Angela Merkel in Germany. From the readout: “The two leaders discussed the need to encourage all parties to take steps toward de-escalation.”

Then he called King Abdullah II of Jordan. “They called for de-escalation and dialogue, and underlined the importance of fostering stability and security in Iraq.”

Tuesday night, things got pretty hairy in Baghdad. Trudeau met with his Incident Response Group, which exists for just such moments. Its members include Champagne, Sajjan, their deputy ministers, the Clerk of the Privy Council, and his national-security advisor. As with his Friday meetings, which featured substantially the same dramatis personae, this is a story about the prime minister meeting with his staff.

From the PM’s news release after the Incident Response Group met: “We continue to strongly urge de-escalation across the region.”

To be fair, other ministers have been active. Chrystia Freeland has been meeting with Alberta mayors, which apparently at some point became an exotic and daring thing for federal Liberals to do. Steven Guilbeault, the new heritage minister, has been visiting sites of federal largesse, which has always been something heritage ministers did. We’ll have to get back to you about whether it’s now the only thing ministers of heritage do.

My favourite among the very small number of announcements of government activity that I’ve received lately is this, from Karina Gould, the new minister of international development, though she’s long been the Minister Happiest to Go Where She’s Pointed. On Friday in Toronto, we’re informed, she’ll be “the keynote speaker at 12:30 pm as part of the Trudeau Massey Centennial series celebrating the 100th anniversary of the birth of Pierre Trudeau.”

The conference she’s attending, called Liberal International, Then and Now: The Foreign Policy of Pierre Trudeau, will consider “Canada’s experience in dealing with superpowers, security and international institutional architecture”—you know, back when governments did things—and “the values of liberal Internationalism that animated Pierre Trudeau such as the rule of law, international institution-building and arms control.” The conference also seeks to “compare” those values “to what is happening to the world today.” Here’s one difference that comes to mind: Pierre Trudeau, apparently, was animated.

I don’t want to get all filial, but here’s a question: When the 100th anniversary of Justin Trudeau’s birth arrives in 2071, will there be a conference, or anything to discuss at it?

It’s worth noting that the prime minister telegraphed his new peekaboo approach shortly before he vanished from public view. In a year-end interview with The Canadian Press, he said he had every intention of keeping a lower profile in a less “leader-centric” government.

“I think a lot of the time, politics has become very leader-centric in terms of the visuals,” he told CP. He planned to give more prominence to the “extraordinary team of ministers who weren’t always given the attention or visibility that we would all have benefited from.”

But so far that’s not what’s happening. It’s not actually true that the PM and his ministers are the only players in this system, perched on a virtual see-saw so that when one falls, the others must rise. It’s possible for them all to be down at once, burdened by inertia, risk aversion and the apparently deeply baked-in need for an unelected command-and-control squadron to approve all action before anything happens.

Here’s my advice to Trudeau’s ministers.

Ministers, those people the PMO sent to be your chiefs of staff are your minders. Their job is to keep you in line. If, like Bill Morneau, you notice that your third consecutive chief of staff has been sent to you by the PMO, it may be time to admit you have never actually been permitted to be the minister whose title appears on your door.

If you’re newer, or luckier, or have a stronger sense of yourself, here’s a question you can ask yourself at least a few times a week: What would a cabinet minister with my title in an important country be doing right now?

Sure, that other minister in another land would probably sometimes consult counterparts or seek advice from staff. But probably at some point she or he would also actually go out into the world to do something and explain why that thing is being done. A cabinet minister in an important country might be more like Chrystia Freeland and—whisper it—Jane Philpott, and less like the growing list of ministers who, once ejected from the Trudeau government, can hardly be remembered.

There’s some curious language, so far unexplained, in the mandate letters Trudeau sent to his ministers before Christmas. “As Minister, you are accountable for your style of leadership,” the letters say. I have no idea whether the boss meant it. But it’s true whether he meant it or not. Whether you wish it were true or not. You are responsible for your style of leadership.

Christmas break is over.