Politics Insider for April 26: Manitoba will see Ottawa in court, holding Trans Mountain hostage, and a PBO gift for Trudeau 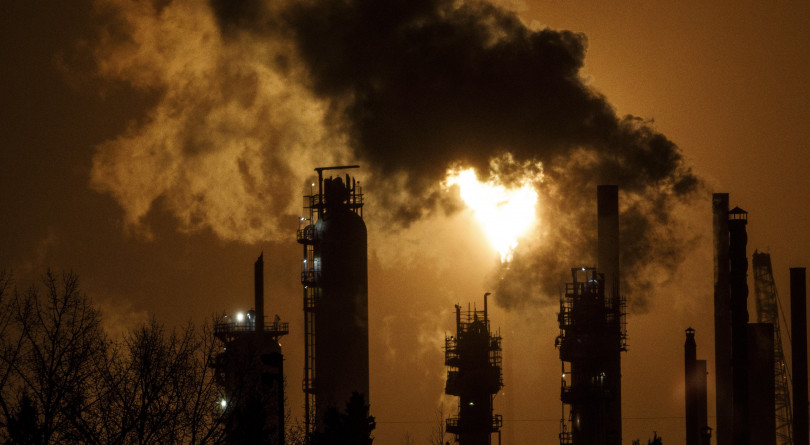 A flare stack lights the sky from the Imperial Oil refinery in Edmonton on December 28, 2018. (Jason Franson/CP)

Champs: Prime Minister Justin Trudeau took aim at the Ontario government for challenging the federal carbon tax in court. “Look no further than Ontario to find a provincial government that is wasting taxpayer’s money fighting climate action in court. It’s shortsighted and irresponsible and, frankly, Canadians deserve better,” he said in a speech to the Nature Champions Summit, an event sponsored by his government that also featured a Trudeau government-praising Harrison Ford. (CBC News)

Afterwards Trudeau sat for a one-on-one with Quebec environmentalist Steven Guilbeault, who the Liberals are courting to run as one of their MPs in the next election, and who put such probing questions to Trudeau as: Tell us how “entrenched” your love of nature is?

Ratcheting up the pressure on Ottawa, Manitoba joined Saskatchewan and Ontario in filing its own court challenge against the federal climate plan. Its case will be slightly different because Manitoba originally proposed a flat carbon tax of $25, with no future increases, which was rejected by Ottawa. The province’s lawyers are going to argue the Trudeau government had no right to rebuff its original carbon levy since it might have been equally effective. “The conduct by the federal government is unfair to Manitobans,”  provincial Justice Minister Cliff Cullen said, to which a spokesperson for Environment and Climate Change Canada replied that Manitoba Premier Brian Pallister is a flip-flopper.  (CBC News)

But will Alberta be next? Premier-designate Jason Kenney has threatened repeatedly that he plans to tear up outgoing NDP Premier Rachel Notley‘s carbon plan as Job One after he takes office. However Trudeau may be spoiling for just such a fight. Citing sources, the National Post‘s John Ivison says there’s an “active lobby” within the Prime Minister’s Office urging Trudeau to block the Trans Mountain Pipeline—which his government bought last year for $4.5 billion—if Kenney scraps a pledge by Notley to cap oil sands carbon emissions. The idea of holding Trans Mountain hostage was first floated publicly by former Liberal national director Jamie Carroll in a blog post two days ago, though Finance Minister Bill Morneau called it an “absurd proposition.” (National Post)

Of note, Natural Resources Minister Amarjeet Sohi said Thursday he can’t guarantee the federal cabinet will meet its June 18 deadline to weigh in on the fate of the pipeline, or even that a decision would come before the next election. (Canadian Press)

Networking: Conservative Leader Andrew Scheer and other top party officials huddled with seniors executives from the oil patch earlier this month to draft a plan of attack to defeat Trudeau in the next election:

One session at the conference focused on deploying “litigation as a tool” to silence environmental critics and featured U.S. opposition researcher Mike Roman, who served as special assistant and director of special projects and research under Donald Trump until last year. He spoke alongside Arthur Hamilton, a lawyer with Cassels Brock & Blackwell LLP, which represents Quebec-based Resolute Forest Products, the agenda showed. Mr. Hamilton is also a lawyer for the federal Conservative Party. Resolute has waged a long-running and largely unsuccessful court battle against Greenpeace.

Another panel was dubbed “Paths to federal election victory” and was led by an executive for polling firm Ipsos Public Affairs who was introduced by CAPP president Tim McMillan. (Globe and Mail)

Talk about carbon hypocrisy: Andrew MacDougall has some advice for Trudeau as he battles to protect his climate plan—lead by example:

Whatever your position on climate change—and I am someone who believes we need to act using a carbon tax among other policy responses—we can all agree the Prime Minister is exacerbating the problem he seeks to solve. If everyone jetted around like Trudeau the earth would be toast in record time.

Yes, the Prime Minister deserves time with his family. That’s not the point. We all do. But it doesn’t mean we have to be carbon pigs doing it. If Trudeau can fly all the way across the country for a few days of rest and relaxation then the ordinary Canadians who the Prime Minister is trying to convince to limit their carbon footprints can go to the Caribbean (or points further) for the same.

What climate gospel can Trudeau possibly preach when he took the Challenger jet back and forth to Florida on vacation twice in one week? (Maclean’s)

A new report from the Parliamentary Budget Officer provides the Trudeau government with some fodder for its fights with its carbon tax critics. It confirms that households in Saskatchewan, Manitoba, Ontario and New Brunswick will get back more in the form of carbon rebates than they pay in carbon taxes. Those four provinces do not have federally-approved carbon taxes of their own. (Canadian Press)

X marks the spot: Ahead of next month’s election in Newfoundland and Labrador, which will test the fate of one of the last two Liberal provincial governments in Canada, Ches Crosbie, leader of the Progressive Conservatives, says Premier Dwight Ball was “sneaky” in calling an early election, since only his Liberals have a full slate. Not sneaky, says Ball, just prepared. (The Telegram)

Note: The original version of this post quoted a Globe and Mail story that described Arthur Hamilton as a lawyer with Resolute Forest Products. In fact Mr. Hamilton works for Cassels Brock & Blackwell LLP, which represents Resolute.
FILED UNDER: Editor's Picks Politics Insider