The U.S. president says he doesn't like Canada's foreign minister, but the more interesting dynamic is the contrast between Freeland and Robert Lighthizer, Trump's trade czar 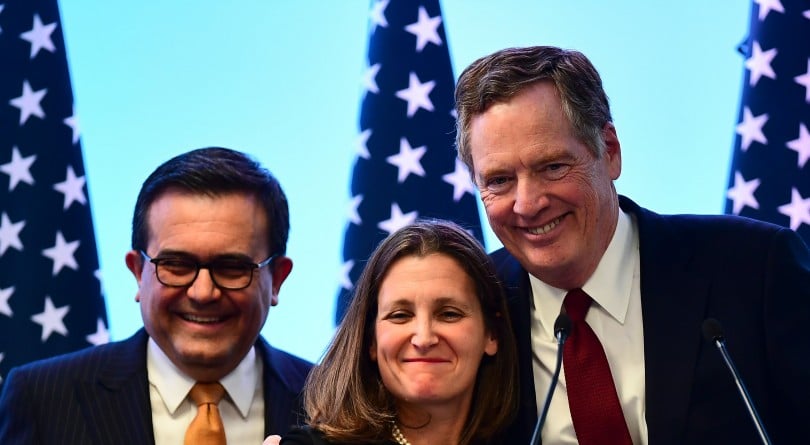 It was a moment a lot of obsessed NAFTA-watchers had been waiting for. “We’re very unhappy with the negotiations and the negotiation style of Canada,” U.S. President Donald Trump griped in one of his characteristically rambling news conferences this week. “We don’t like their representative very much.”

Finally, it was out in the open. By “their representative,” just about everybody assumed Trump meant Foreign Minister Chrystia Freeland. For critics of the Liberals’ NAFTA bargaining tactics, that rather un-presidential put-down confirmed a hunch. Sure, their argument goes, Freeland might be right on the technicalities of trade, but she needlessly annoys the Trump gang.

She has, after all, prominently taken aim at everything Trump represents. By voting for him, she said in the House of Commons last year, Americans were “animated in part by a desire to shrug off the burden of world leadership.” In a major speech in Washington last spring she spoke about “angry populism” before unleashing a detailed critique of Trump’s protectionist trade reflexes.

So, sure, no doubt Freeland sometimes bugs Trump’s crew. But to reduce the trade-talks dynamic to personal friction risks missing what matters far more about the gulf between her worldview and the outlook of the guy she faces directly across the NAFTA table, United States Trade Representative Robert Lighthizer. This isn’t about who doesn’t like whom. It’s about who thinks what about the way the world works.

Their backgrounds matter. Freeland, 50, is a journalist-turned-politician, a consummate networker in liberal global elite circles. Lighthizer, 70, is a trade lawyer with establishment Republican roots. To get a sense of where they’re coming from, let’s glance at what they were preoccupied with back in, oh, 2011—when Freeland was Reuters’ global editor-at-large and Lighthizer was in private practice in Washington.

In an op-ed piece in the New York Times in April of that year, Freeland started out by observing, “Global capitalism isn’t working for the American middle class.” She went on to unpack reports showing that technological change and globalization were enriching corporate executives but not ordinary folks. She concluded that U.S. politicians had to start figuring out, not how to dismantle the system, but to make it work for those in the middle class.

The following month, Lighthizer published an op-ed in the Washington Times. He took special note of rising enthusiasm among Republicans for, of all people, the long-shot presidential hopeful Donald Trump. In particular, he argued that Trump’s protectionist rhetoric, which orthodox free-trade conservatives were scoffing at, actually fit with an older Republican tradition of supporting tariffs. Lighthizer pointed abroad, particularly to China, at “state-sponsored, government-organized unfair trade” that was costing Americans jobs and America clout.

RELATED: Justin Trudeau on fighting populism, pushing a carbon tax, getting a NAFTA deal, and more

In a way, Freeland and Lighthizer weren’t so far apart back then. Both looked at the way the world economy was working in the globalized era and didn’t like the results in the U.S. After that, of course, they diverged. What’s fascinating about their clashing mindsets is how, to me at least, each of them looks to have been shaped by a preoccupation with one of the two biggest developments in geopolitics of their times. For Lighthizer, it’s the rise of China. For Freeland, the fall of the Soviet Union.

Freeland was born in Alberta in 1968, and her Ukrainian-immigrant mother’s family perspective was formative. She studied Russian history and literature at Harvard and was an exchange student at University of Kiev when the Soviet Union fell apart. She studied the region, lived there, knew the languages, and was eventually Moscow bureau chief for the Financial Times.

For Freeland, finding their place in the postwar liberal order—exemplified by institutions like the World Trade Organization and International Monetary Fund—is what countries like her beloved Ukraine aspired to when the dark days of authoritarianism were over. “Critically, this was built as a system that other nations—emerging powers—could join,” she said last June in her acceptance speech for Foreign Policy’s Diplomat of the Year award.

While Freeland’s approach to world affairs was deeply informed by her attention to post-Communist Eastern Europe, Lighthizer has been worrying mostly about Asia. Back in the 1970s, he worked on trade issues as a Senate staffer, and then in the 1980s as deputy trade representative under then-president Ronald Reagan, when competition from Japan was the White House’s balance-of-trade bugaboo.

READ MORE: When it comes to NAFTA, deadlines are meaningless

In more recent years, Lighthizer came to see China as the big threat. In a New York Times op-ed in 2008, he slammed those who “embrace unbridled free trade, even as it helps China become a superpower.” He railed against “bowing to the whims of anti-American bureaucrats at the World Trade Organization.” Out of that antipathy for the WTO, Lighthizer came to prefer bilateral trade deals that don’t undermine, as he sees it, U.S. sovereignty and freedom to protect American industry.

Do they get along? It’s an interesting question, but not as interesting as what they represent. Lighthizer may be wrong about NAFTA, but he’s drawing on Republican tradition he’s studied carefully, and the real threat represented by China is never far from his mind. Freeland may have erred tactically in irritating Trump, but she’s giving voice to anxieties about populism and protectionism that are amply justified, and her grasp of contemporary Europe broadens her perspective.

Politics can look chaotic these days, attempts at coherent analysis futile. Retreating into guessing games about political personalities is tempting. But with Freeland and Lighthizer, the chance to size up clashing responses to the era’s most pressing challenges is too good to pass up.