Come for the Trump-Trudeau handshake, stay for the squirm

Politics Insider for Dec. 4: Justin Trudeau and other world leaders gossip about Trump, some branding advice for Conservatives and John Manley calls for 'prisoner swap' with China 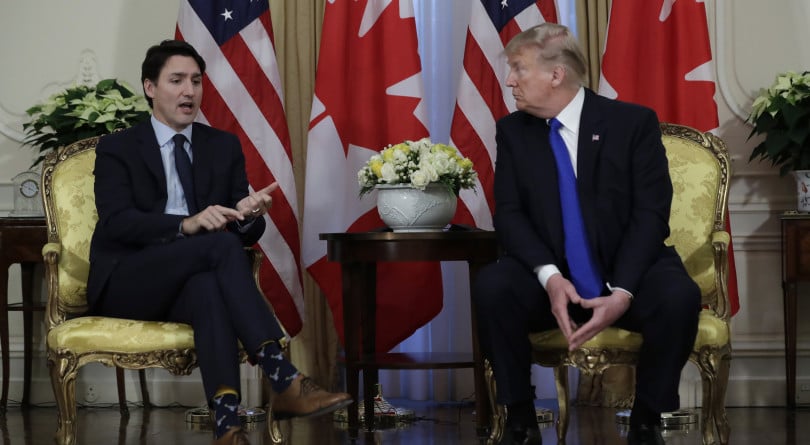 It’s an improvement: At one time, a meeting between Donald Trump and Justin Trudeau would have been accompanied by column inches of handshake analysis, so maybe it’s a good thing for relations with our largest trading partner that we’ve moved past that stage of Trumpian diplomacy. The sit down between the two leaders at the NATO gathering in London was still your run-of-the-Trump-mill bizarre spectacle (See: CNN’s 33 most outlandish lines from Trump’s news conference with Trudeau) but where the President used to make headlines for calling Canada a “disgrace” or a national security threat, this time Canada was upgraded to “slightly delinquent.”

The comment came when Trump assessed Canada’s commitment to meeting NATO’s defence spending target of two percent of GDP. It was also the moment when Trump made Trudeau squirm. When asked whether Canada should have a plan to boost military spending, Trump suggested putting “Canada on a payment plan.” Then he asked Trudeau, “Where are you at? What is your number?” leading to Trudeau to pivot to talk about a “70 per cent increase over these past years… for the coming years… ” in defence spending.” What’s your number, Trump asked again, at which point Trudeau asked off camera to officials who threw out numbers. Trudeau told Trump 1.35 per cent, then rounded it up to 1.4 per cent. For what it’s worth, the actual current figure is 1.31 per cent.

Later at an event, Trudeau, along with France’s Emmanuel Macron and the U.K.’s Boris Johnson, were caught on video apparently gossiping and laughing about Trump, though without ever naming him. “He was late because he takes a 40 minute press conference off the top,” Trudeau says at one point in the CBC clip. In another clip he says “You just watched his team’s jaws drop to the floor.” Which all might be a problem for Canada if Fox News ever got a hold of the video.

The Trudeau government’s high noon moment with Beijing: A Senate motion next week is putting the Liberals at a crossroads when it comes to Canada’s relations with China, writes Terry Glavin. Will they break with their party’s entrenched pro-China lobby? Or reward Beijing’s bullying and hostage-taking?:

A long-overdue parliamentary showdown with the Beijing-friendly wing of the Liberal Party looms ominously next week in a motion before the Senate that calls on Justin Trudeau’s government to sanction a roster of senior Chinese and Hong Kong officials under the Victims of Corrupt Foreign Officials Act.

Given his inclination to bombastic, rule-breaking eruptions, Chinese strongman Xi Jinping should be counted on to opt for vengeful reprisals if the motion proceeds very far through Parliament, and Trudeau’s minority government would find itself reluctantly stumbling towards high noon with Beijing.

A clean break from the grip of the deeply entrenched China lobby would allow Canada to shake itself out of the bizarre foreign-policy paralysis that has enfeebled the Trudeau government ever since the Huawei crisis erupted a year ago this week. It would open up an opportunity to throw off the catastrophic institutional, political and corporate entanglements with China that comprise the defining legacy of the Liberal Party’s approach to Canada-China relations over the past half century. Read more ››

Speaking of Canada’s pro-China lobby: Former Liberal cabinet minister and now man-about-corporate Canada John Manley is back with another diplomatic hot take for his old party: to smooth things over with China and secure the release of two Canadians arbitrarily arrested by Beijing, Ottawa should conduct a “prisoner exchange” — in other words, give us Michael Kovrig and Michael Spavor and we’ll overturn the rule of law and hand over Meng Wanzhou, the Huawei executive by Canadian law enforcement on a U.S. extradition warrant. Manley serves as a director for Telus, which uses Huawei technology and has defended the Chinese company against calls for a ban on its technology.

For the Conservative Party, here’s a lesson on branding: Under former prime minister Stephen Harper, Dennis Matthews served as an advertising and marketing advisor. Now he’s got some brand advice for a Conservative party struggling to appeal to voters in densely-populated parts of the country:

Political parties don’t often think about their brands the way corporate marketing teams do, but maybe they should. Because if Conservative conventions were shareholder updates, the chief marketing officer would take the stage to show how the customer base is shifting and how to keep up.

It’s been done many times before: Dove expanded its offering to match new purchasing patterns by including a product line specifically for men; historically male brands like the NFL, Adidas and Harley Davidson, have invested millions in reaching female consumers; and the best brands find a way to tap into culture to stay relevant. Think of a Nike ad: it’s not about the quality of foam in their shoes. Rather, it’s about cultural greatness. You know who else Nike has spoken to through its advertising? Female athletes. It bought a pricey spot during the Oscars this year to debut an ad about women breaking barriers.

When was the last time anyone associated the Conservatives with breaking barriers? It’s not that they haven’t: the first woman cabinet minister and the first black MP were Tories; Conservatives gave women the vote and brought in the first Bill of Rights. Conservatives are not perceived to be innovative anymore, and as a result, the party is increasingly removed in parts of the country that are growing fastest. Read more ››

Your turn: Help us better understand what you’d like from the Maclean’s Politics Insider newsletter. This short survey will only take a few minutes to complete. We really appreciate the feedback.