Consultation, engagement and other buzzwords to watch this week 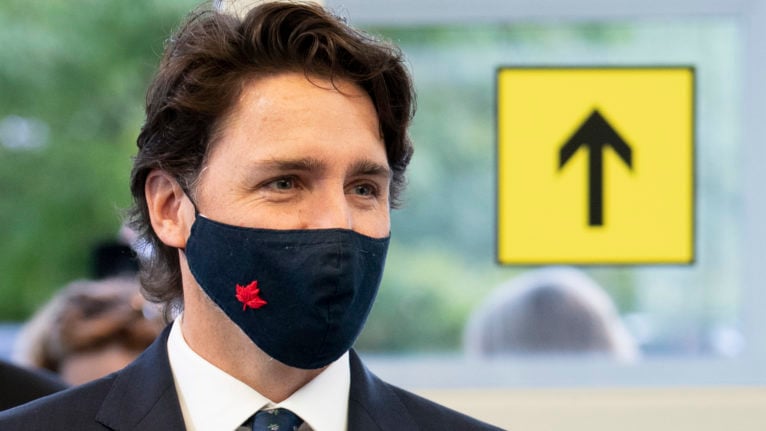 As Justin Trudeau‘s cabinet headed behind closed doors for a two-day retreat in Ottawa, the Prime Minister said his government had been “engaging” with opposition parties “on multiple levels” about the fall session. That claim’s wording—vague with hints of specifics—begged for follow-up. HuffPost’s Althia Raj asked all the parties and found, to a person, no evidence of consultation on any level. The Throne Speech is next Wednesday.

Blaine Higgs and his Progressive Conservatives won a majority government last night. Higgs gambled that voters wouldn’t punish him for calling a mid-pandemic election, and secured 27 seats—two more than the majority threshold. Higgs was the first N.B. premier to secure reelection since another Tory, Bernard Lord, pulled off the feat in 2003. Kevin Vickers, the Ottawa shooting hero who served as ambassador in Ireland before heading up New Brunswick’s Liberals, soundly lost his seat to the right-of-centre People’s Alliance. He resigned as leader.

Ontario reported more than 300 new COVID-19 cases yesterday, a number higher than any daily count since early June. Health Minister Christine Elliott‘s daily announcement leaves out all the context of the virus’s spread. Ottawa’s medical officer of health, Vera Etches, recently earned praise for describing how a single infection turned into 40 after a cottage weekend—and shut down two child-care centres. Elliott’s reporting is fuzzy on who exactly is getting infected, but the province’s contact tracers do learn those details. And every anecdote reminds us that the virus is still spreading.

On his first trip to Quebec as federal Conservative leader, Erin O’Toole‘s message was the same as most of his predecessors who wanted to score votes: Quebec’s autonomy matters. O’Toole didn’t tell Quebec Premier François Legault that a provincial law barring public sector workers from wearing religious symbols was a problem for his party. And he didn’t oppose the province applying its French-first Bill 101 law to federal workers—including Via Rail employees.

Meanwhile, CBC News reports that O’Toole’s former rival, Peter MacKay, faces a campaign debt nearing $1 million. MacKay’s old riding association in Central Nova wants him to run again—and a higher profile might help with fundraising—but the longtime MP is still considering his options. He has three years to pay his outstanding debt before penalties, which include jail time, are on the table.

Kenney drops into a tie for first: Maybe it’s an aberration, an outlier, a fluke. Or maybe public opinion in Alberta really is shifting. A new Angus Reid Institute poll has Alberta’s United Conservatives tied with the provincial NDP at 38 per cent. Jason Kenney’s party is shedding some of its support among middle-aged supporters. Meanwhile, almost every NDP voter in the last election is still committed to that party.

Small biz energy: Regular readers will remember occasional references here to Save Small Business, a rag-tag advocacy group that argued for rent relief that didn’t just mean more debt for entrepreneurs. They found some success with a federal-provincial program that cut rent for thousands of businesses by 75 per cent. But now the group, “working at this off the side of our desk, late at night and on weekends while running our own businesses and raising our families,” is winding down its work. “We have run out of steam,” wrote co-founder Jon Shell, who published a final appeal for the next phase of small-biz support.

As Afghanistan’s government enters negotiations with the Taliban, Foreign Minister François-Philippe Champagne says he welcomes the “long-awaited opportunity to pursue the elements of peace for the people of Afghanistan.” Flashback to 2006, when then-NDP leader Jack Layton—under different circumstances, out of a desire to get Canadian troops out of a war—called for similar negotiations. At the time, Tory MPs claimed soldiers had developed a nickname for Layton—Taliban Jack—and they happily repeated the slur in Hansard. Layton’s position slowly won the test of time.

The Diefenbunker was ahead of its time: Your newsletter correspondent drove west to Carp, Ont., to visit a certain Cold War museum. Any trip to the bunker is a blast (not literally). Even during a pandemic, business was booming (again, not literally).

I stood alone in front of the prime minister’s bed, wearing a mask. He was nowhere to be found, his sheets taut and unused. His washroom was small, corroding in places. His desk nearby was sparsely furnished with just a small clock and a rotary phone. There was an eeriness to the space, punctuated by its isolation from the outside world. News of a burbling cross-border trade war seemed far away, as did a persistent public health threat that knew no borders. The PM’s bedroom, safely cloistered from the outside, offered rare, silent refuge. It helped that I was standing in a subterranean chamber surrounded mostly by farmland, down the street from a village named after a river named after a sucker fish.

From Ottawa to Dubai: A few years back, Anas Marwah was an up-and-coming politico whose satirical video series recorded at Carleton University once tapped into the zeitgeist. Marwah was Catherine McKenna‘s digital media director in 2015. He later served a stint in the office of Liberal MP Iqra Khalid. He’s posed with the PM time and again. The New York Times interviewed him about The Weekly Show, which ended up serving as a gateway to YouTube stardom. Marwah and his family’s Arabic-language channel has netted 7.92 million subscribers. You might have seen them in the news recently for a headline-generating gender reveal. Yes, that gender reveal. On the side of the Burj Khalifa. What, the Peace Tower wasn’t good enough?