A month into this crisis, the Prime Minister didn’t offer clarity on the key questions, placing a bet that the longer it goes on the less Canadians will care 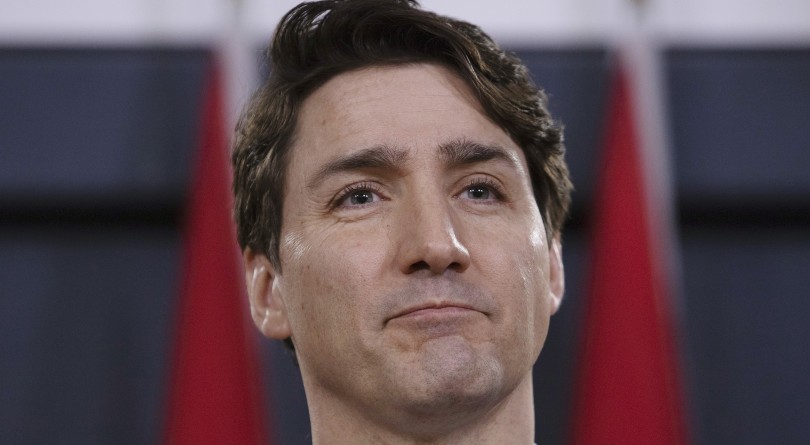 The word hanging in the air as Justin Trudeau entered the National Press Theatre this morning, just off Parliament Hill, was “contrition.” Sources who remained unnamed, naturally, had reportedly assured journalists that Trudeau would use this news conference to express regrets, more or less, about the SNC-Lavalin affair that led to first Jody Wilson-Raybould and then Jane Philpott bolting from his cabinet.

But the Prime Minister wasn’t contrite. On that more-or-less scale, his willingness to say he’s sorry registered as barely at all. He allowed vaguely that he should have been more attuned to eroding trust between his aides and Wilson-Raybould. And he said he would be asking unspecified outside luminaries to look into the way things operate at the highest levels of the government.

Yet the late date of this press conference—a long four weeks after his government’s worst crisis to date began with a story in the Globe and Mail—meant Trudeau had allowed himself more than enough time to do something far more useful than just working himself up for a nice show of regret. By now, he should have equipped himself with precise information about what happened.

And the most important bit of information he might have opted to talk about candidly was whether or not his Prime Minister’s Office staff raised baldly political factors in their discussions with Wilson-Raybould and her staff on the contentious option of giving SNC-Lavalin a way to avoid a damaging bribery trial. Wilson-Raybould’s assertions that she faced this sort of improper pressure—that the Liberal party’s electoral prospects were repeatedly put on the table—is of course at the centre of this controversy.

But Trudeau didn’t bring that sort of clarity to his answers a month into this affair. Asked directly whether his officials injected political considerations into the sensitive SNC-Lavalin discussions, he dodged. “I’m sure there were a broad range of issues discussed in these conversations,” Trudeau said airily. “Certainly, the Ethics Commissioner will be looking into these matters to ensure that the highest ethical standards were kept and maintained and addressed. This is something that continues to be a process.”

The least important part of that answer might seem, on first listen, to be that final tacked-on sentence about process. But consider it more closely. Trudeau seems to be betting that the longer the Wilson-Raybould affair “continues to be a process,” the less Canadians will care. The Ethics Commissioner is looking into it. Certain aspects of the interactions between the Prime Minister’s operation and cabinet minister’s offices might need adjusting. Splitting the combined role of justice minister and attorney general is sure an interesting idea.

All that is pretty boring. So Trudeau has good reason to expect that none of it will matter much in the coming October election. “In regards to the choice that Canadians are going to be able to make this coming fall, I look forward to the opportunity to highlight what we are continuing to do, what we continue to learn as we move forward in ways of better serving Canadians,” he said. “But I’m very confident of our approach that has delivered tangibly and concretely for Canadians.”

Along with pointing to his government’s ongoing policies and programs, Trudeau made a rather audacious bid to remind Canadians about the underpinnings of his own image. He did this by pointedly invoking the legacy of his father, the late former prime minister Pierre Trudeau, as a man preoccupied with issues of justice.

“I was immensely pleased to discover that the new Prime Minister’s Office in the West Block is an office that was occupied by my father when he was minister of justice,” Trudeau said, alluding to his recent move to new digs when Parliament’s Centre Block closed for extensive renovations. “And throughout his career, he was dedicated to that principle of justice—the just society, the Charter of Rights and Freedoms—and his approach of justice and fairness infused everything he did and certainly was something that he raised me with.”

His meaning was clear: Justin Trudeau wasn’t brought up to undermine a justice minister the way Wilson-Raybould says he did. It was remarkable to hear the Prime Minister drawing down his personal political capital in this moment. For me, though, this brought a quite different Trudeau pere et fils comparison to mind.

Back when he was running for election in 2015, Trudeau told CBC’s Peter Mansbridge about an aspect of his father’s way of running things that he planned to reverse if he came to power. “One of the things that we’ve seen throughout the past decades in government is the trend towards more control from the Prime Minister’s Office,” he said. “Actually, it can be traced as far back as my father, who kicked it off in the first place. And I think we’ve reached the endpoint on that.”

If there’s one thing this affair has made plain, it’s that highly centralized PMO control did not reach its endpoint with the Liberal victory in 2015. Is Justin Trudeau his father’s son when it comes to revering justice? He says he is. Is he like him when it comes to concentrating power in his own inner circle? He said he wouldn’t be, but that’s not how it looks.