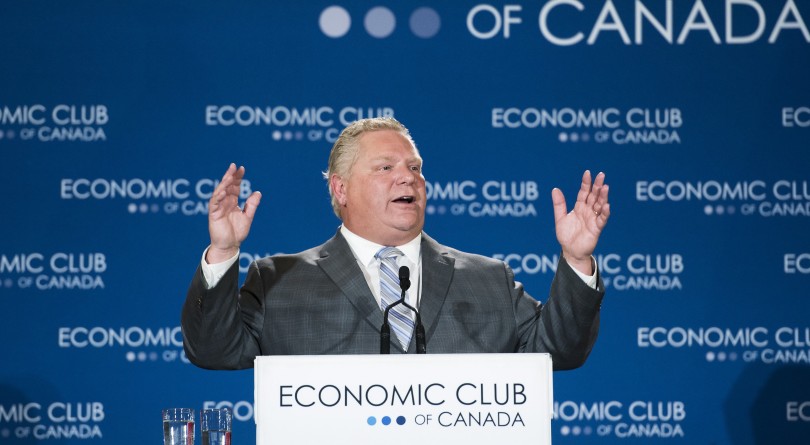 Ontario Premier Doug Ford speaks at the Economic Club of Canada in Toronto on Monday, January 21, 2019. THE CANADIAN PRESS/Nathan Denette

Two Canadians seized by China in retaliation for the arrest of a Huawei executive in Vancouver are being kept in rooms with the lights left on 24 hours a day, subject to lengthy interrogations, barred from speaking with lawyers and allowed just 30 minutes to meet with consular officials each month. Canada’s ambassador to China, John McCallum, shared the prison conditions of Michael Kovrig and Michael Spavor during an in-camera meeting with foreign relations committee last Friday. (Globe and Mail)

A group of 140 former ambassadors and academics sent an open letter to Chinese President Xi Jinping, urging China to release the two men. In the letter, they point to Kovrig’s regular outreach meetings with Chinese scholars and officials, and say those types of exchanges “are the foundation of serious research and diplomacy around the world… However, Kovrig and Spavor’s detentions send a message that this kind of constructive work is unwelcome and even risky in China. (Toronto Star)

Economists said Ford is indeed out to lunch. “It’s completely baseless to say that the carbon tax would cause a recession,” economist Trevor Tombe told the Globe and Mail, one of several economists who took aim at Ford’s claim. What evidence did Ford have to back up his claim, his office was asked? Well, a Conference Board report said carbon taxes would shave $3 billion off the economy in 2018. By way of comparison in the last quarter alone Canada’s economy expanded by $42 billion to $2.2 trillion. By definition, a recession would require two or more consecutive quarters of outright negative growth.

While in Halifax, Maxime Bernier test drove a slogan for his People’s Party in the next federal election. It might ring a bell: “Make Canada Great Again.” (Global News)

The Neskantaga First Nation, 450 km northeast of Thunder Bay, Ont., is on the verge of getting its first safe drinking water system in 25 years. For residents like Casey Moonias, a young mother of three, it will be the first time she has ever turned on the tap in the community. As Kyle Edwards writes, it’s a change that locals refer to as “the moment.” But skepticism of the Trudeau government’s promise to end all boil-water advisories on First Nations by March 2021, remains, as do suspicions about the safety of the water:

At first glance, the government appears to be moving the dial, issuing regular “tracking” updates that show its progress. According to these updates, the government has eliminated 75 long-term drinking-water advisories since 2015, and the work continues apace (long term in this context means more than a year). Critics, though, say the feds’ tracking is flawed, and can come across as self-congratulatory. The 66 advisories that remain include dozens in communities that have backslid into advisory status, along with a few there for the first time.

Neskantaga is a severe example of what life is like trapped under advisory. After years of lugging jugs and buying bottled water, few here believe “the moment”—a phrase several locals used when musing to Maclean’s about the instant they’ll have clean water—will actually happen in March. Construction holdups have delayed the date before. Some will welcome the change. But for others, distrust of the system, and of what comes out of the tap, runs deep. Some say that even after the water comes on, they don’t plan to drink it. (Maclean’s)