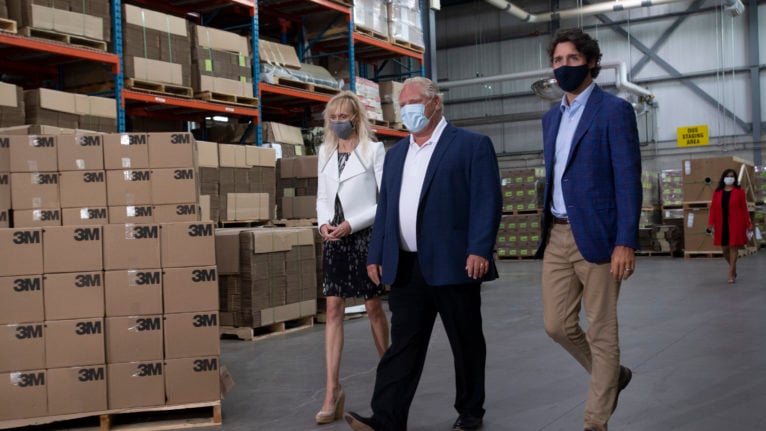 Canadian parents are split down the middle on whether or not they’d prefer to see their kids back in school next month. So says a new poll from Abacus Data that pegs Tory voters and Alberta residents as most likely—at about two-thirds support—to be happy to see schools reopen. That’s the backdrop for Prime Minister Justin Trudeau’s announcement yesterday of $2 billion split between the provinces for a so-called Safe Return to Class fund.

Once again, the PM found an ally in Ontario Premier Doug Ford. “The Prime Minister, when he spoke to me [last] Friday, the first thing that came out of his mouth was, ‘Doug, I understand this isn’t my jurisdiction but I just want to help.’ And we’re grateful for that and I just want to thank the Prime Minister.” Ford’s federal cousin, Conservative MP Karen Vecchio, said the timing of the funding proved Trudeau is “more interested in putting on a show” than helping. Alberta’s education minister, Adriana LaGrange, called the fed-prov money a “very sudden”—though appreciated—injection.

Bookmark the lobbyist registry: The Hill Times reports that the Throne Speech sweepstakes are well underway. With a prorogued Parliament setting the stage for a new federal agenda to be launched on Sept. 23, lobbyists are looking to take full advantage. They all know that ministers will receive fresh mandate letters with specific marching orders for pandemic recovery.

Bloomberg writes that Chrystia Freeland‘s recent elevation to finance minister “signals the most decisive lurch to the left in economic policy in at least four decades.” The wire service found a senior government source who called Freeland the “intellectual muscle behind policy decisions to tackle inequality” who will use a pandemic recovery plan as “a vehicle for more reforms to help close a widening income gap.”

Industry Minister Navdeep Bains happily tweeted a good-news story for Canada’s tech sector in a year known for setting economic records in the wrong direction. “Venture capital investment in Canadian companies,” reported Betakit, “hit a record high in the second quarter of 2020, much to the surprise of industry leaders.”

An independent panel appointed by the Trudeau government to review solitary confinement in prisons says it has disbanded—and was “powerless to accomplish the job that it was set up to do.” Vice News reports that Correctional Service Canada wasn’t adequately collecting data on how its facilities were using new “structured intervention units.” The result, writes Justin Ling, is dispiriting. “Canada has no idea whether its new system is, like the old system, continuing to subject inmates in Canada’s federal prisons to torture.” Late yesterday, Public Safety Minister Bill Blair said he would renew the panel’s appointments and ensure proper data is provided.

Erin O’Toole, seeking to define himself as Tory leader before his opposition gets the chance, pushed out an ad produced on the heels of his first meeting with Trudeau. The Tories now have three Facebook ads on the go. Who exactly is watching them? Detailed analytics say the audience is mostly men—30 per cent of all watchers are guys aged 35-54 on one ad, while another skews slightly younger and another a little bit older.

Millennial and Gen Z francophones don’t value Quebec nationalism: The Environics Institute teamed up with four public policy think tanks across Canada on the Confederation of Tomorrow survey on the division of powers. Five authors joined forces in Maclean’s to write about which level of government best represents Quebecers. They found a stark generational divide—with a twist.

On a lighter note: Macaulay Culkin is 40 years old, and throwing that fact in everyone’s face. This is the appropriate gif for the occasion.