Elizabeth May: 'We will not allow the Parliament of Canada to let down our children'

Anne Kingston: The Green Party leader told her election night crowd that she will hold a minority government's feet to the fire. 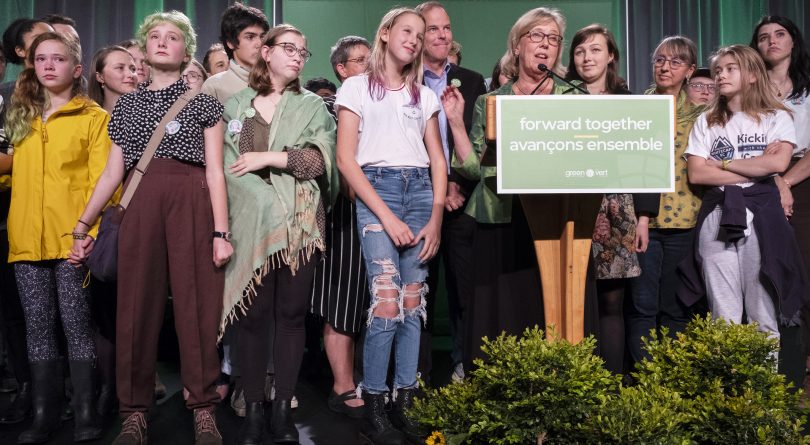 May delivers a speech on election night alongside supporters. (Photograph by Jen Osborne)

VICTORIA, B.C. — The evening began with jubilation for the Green Party of Canada inside their election night returns party at Victoria’s Convention Centre. Green Leader Elizabeth May arrived in the early evening to clapping, cheers and hope. Fredericton Green candidate Jenica Atwin had just been declared the winner in a riding held by the Liberals. That made Atwin the third ever federally elected Green, the first to win a seat beyond Vancouver Island. But before the night was out, hopes were dashed, and young climate activists stood on stage in tears.

Wearing an emerald green jacket, adorned with a campaign button supporting John Kidder (May’s husband and the Green candidate in Mission-Matsui-Fraser Canyon), May made her way through the crowd, talking to media. True to the Greens’ grassroots’ ethos, May eschewed the big late-night leader ‘reveal.’ “The goal is to be in a position where we’re in a balance of power,” May said early on. As the night ticked by, big TV screens announced results. Brianna Bear Tealye of the Songhees Nation shared The Wildflower Song, and bands played jazzy numbers. The energy dissipated, the crowd thinned. There were hoots for close second place finishes, like that of Green Laura Reinsborough in New Brunswick’s Beauséjour, where she lost to Liberal Dominic LeBlanc. The win of May’s friend, Independent Jody Wilson-Raybould, in Vancouver Granville, received a cheer. May and Paul Manly, elected in a Nanaimo-Ladysmith by-election earlier in 2019, kept their seats on Vancouver Island, regarded ground zero for party gains. The hoped-for Green sweep of the island didn’t happen. The NDP won the remainder of seats, with the exception of  Kidder’s riding, which went to the Conservatives.

READ MORE: Federal election 2019: This is what the House of Commons will look like

“It’s very important to break through,” May told Maclean’s before the final polls were in. When they were, May stood on the stage, speaking optimistically about how it had been a great night, how the party doubled its popular vote, tripled its seat count and put in the best performance ever for a Green party in a first-past-the-post system. She was flanked by young climate activists, many present when she announced her campaign 40 days ago. Some sobbed in disappointment. “This was a children’s crusade, and I vowed not to let them down,” May told the gathering, saying some asked her: ‘Doesn’t Canada care about our future?’

The politician offered reassurance: “What I want them to know, and what I want all Canadians to know that I know in my heart that all Canadians do care about the future, they care about the climate crisis,” May said. “And those leaders … I’m speaking of course to Prime Minister Trudeau and Mr. Singh—who said they had a plan for our future while not having one. We go to Parliament determined to ensure that you actually have one while we still have the chance. We will not allow the Parliament of Canada, in its 43 session, to let down our children.” The Greens plan to hold the minority government’s feet to the fire, May said: “There will be crispy toes.”

But in Victoria, in the moment, the injury felt raw, real and very local.