Conservative leadership candidates won in unexpected places and fell flat in others. And when Leslyn Lewis dropped off the ballot, the upstart candidate's voters played a decisive role in crowning O'Toole 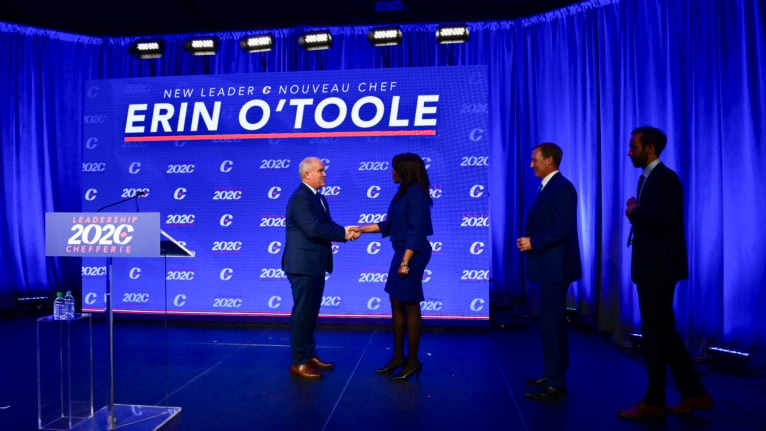 Most party leadership conventions follow one of two paths. The most boring contests end with a frontrunner winning on the first ballot—or even if they need a few candidates to drop off before securing the win, they lead the whole way and secure a comfortable victory. The other path sees an underdog rise over the course of balloting, collecting the support of eliminated candidates and vaulting past the perceived frontrunner. Dalton McGuinty caught up to Gerard Kennedy in 1996. Stephane Dion eclipsed Michael Ignatieff in 2006. Andrew Scheer skirted past Maxime Bernier in 2017. And last month, Erin O’Toole bested Peter MacKay after trailing in early rounds of voting.

The final ballot results tell a simple story. O’Toole won by scooping up the second-choice votes of the social conservatives vying for the Tory crown. Scheer benefited from similar patterns three years ago. But a detailed breakdown of the riding-by-riding results tells a fascinating story that reveals the power of so-con voters and the regional dynamics that pushed O’Toole over the top. Leslyn Lewis, the upstart of the race who tacked to the right of the two frontrunners, swept Saskatchewan in the second round. On the final ballot, MacKay salvaged much of the Greater Toronto Area, winning 35 ridings to O’Toole’s 18—including his Durham riding and a clutch of surrounding districts. And Derek Sloan, whose share of votes bested the combined haul of the two most prominent social conservatives in 2017, somehow eked out a win on the island of Montreal.

These charts illustrate the leadership race’s dramatic evolution between ballots, where candidates exceeded expectations—and fell flat—in unexpected places and how O’Toole survived a second ballot to win it all. (See the full results here.)

Leslyn Lewis, a one-time candidate in suburban Toronto, raised more money and made more noise online than almost anyone expected. And the riding-by-riding breakdown shows just how close Lewis came to finishing second on the second ballot. After one round, she won or tied 44 ridings in six provinces, including a stunning 13 in Saskatchewan, and placed second in 79 ridings.

When Sloan dropped off, Lewis hoovered up his support and won 90 ridings on the second ballot. She flipped 25 ridings that had favoured O’Toole after the first round, where she turned a combined four-point deficit (30.78% to 26.85%) into a nearly five-point advantage (40.33% to 35.81%). Lewis also swiped another 18 from MacKay on that ballot. Of course, when Lewis dropped off, all but three of her 90 ridings flipped to O’Toole.

Lewis’s second-ballot performance might have briefly made both of her rivals nervous, even if she ultimately fell short. The upstart third-place finisher nabbed 30 per cent of total available points before dropping off. But that included a dismal performance in Quebec, where she won just a single riding on the second ballot and topped 30 per cent in just seven ridings. In the rest of Canada, Lewis leapfrogged O’Toole and finished just a hair—0.44 percentage points—behind MacKay.

O’Toole’s campaign knew that the party’s points system made every riding equally valuable. Districts with a handful of votes were just as valuable as Tory strongholds. The Alberta riding of Foothills, a wide expanse south and west of Calgary, attracted 2,079 voters. Just 28 people voted in Montreal’s Bourassa riding, where Sloan won a tiny plurality of votes on the first ballot (just 10 was enough). In Foothills, there were roughly 61 residents for every vote cast in the race. In Bourassa, that measure leapt to 3,608. Of the top 20 ridings with the most residents per vote cast—they were all in Quebec—O’Toole won 15 on the first ballot. (Where there were the most voters as a share of residents, O’Toole won only 11 of the top 20—with Lewis taking six and MacKay only three.)

Just how many Conservative voters would provide a ranking of all four candidates was a mystery during the race, but Lewis and Sloan voters were widely predicted to have limited their selections to those candidates. Of the 20 ridings with the most drop-off between the first and final ballots, O’Toole and MacKay each won just three on the first ballot. Lewis won half of them, and Sloan took the rest. On the second ballot, Lewis swept every one of them. When she dropped away, O’Toole took all but one, even as he still only captured a fraction of her support. Those were largely rural ridings across Ontario, Manitoba and Saskatchewan, and they illustrated both Lewis’s strength—her supporters were loyal—and also what could have been had she been more competitive in Quebec and the Atlantic provinces.

On the first ballot, MacKay won where Conservatives need to win in the next general election: ridings now held by Liberals. MacKay won in 116 Liberal-controlled districts to O’Toole’s 36. But MacKay won fewer Tory ridings (34) than Lewis (37) and O’Toole (48). If the Conservatives hope to expand their Quebec caucus, their road to more MPs could drive through Bloc Québécois ridings. O’Toole, aided by a low turnout in those areas, won all but two Bloc ridings on the first ballot (MacKay held on to Beauport—Côte-de-Beaupré—Île d’Orléans—Charlevoix, briefly held by the Tories between 2015 and 2019, in the final count).

MacKay, who for 18 years represented a Nova Scotia riding, is not from the Greater Toronto Area. O’Toole, a sitting Ontario MP, represents a riding on the GTA’s eastern edge. When Conservatives win most of the seats in the so-called “905” region, they have formed government. When they lose those seats, Liberals win power. On the leadership race’s first ballot, MacKay ran away with the 905 outer suburbs and the 416 ridings that comprise Toronto’s inner suburbs and downtown core. By the final ballot, the native Nova Scotian who’s recently lived in Toronto for several years retained most of those seats. O’Toole, though, closed the 416 gap to 14-11. He won ridings closer to the core like Davenport, Parkdale-High Park and Toronto-Danforth that almost never vote Conservative when Liberals and New Democrats are on the ballot.

On the first ballot, MacKay dominated urban ridings that tend not to vote Conservative—but which, his camp might argue, could be more competitive under a leader like MacKay. He took 62 per cent of cities (and only about 30 per cent of rural Canada) on that ballot. But O’Toole had rebounded by the final ballot, winning 118 urban ridings to MacKay’s 57. Sloan and Lewis’s departures from the ballot gave O’Toole enough of a boost that he finished with more urban wins than MacKay’s 109 first-ballot wins.

A strong showing in suburban Mississauga and Brampton contributed to MacKay’s commanding lead on the first ballot among ridings where the majority of residents identified as visible minorities as defined by Statistics Canada. O’Toole’s initial strength looked much different, as he racked up wins in majority-white ridings. Lewis, the first woman of colour to run for the party leadership, didn’t win a single riding where the majority of residents identified as visible minority (the closest she came was a win in Coquitlam—Port Coquitlam, B.C., where that number was 46.8 per cent). By the final ballot, O’Toole had managed to erode much of MacKay’s early strength.