Exorcising the ghost of Trudeau past 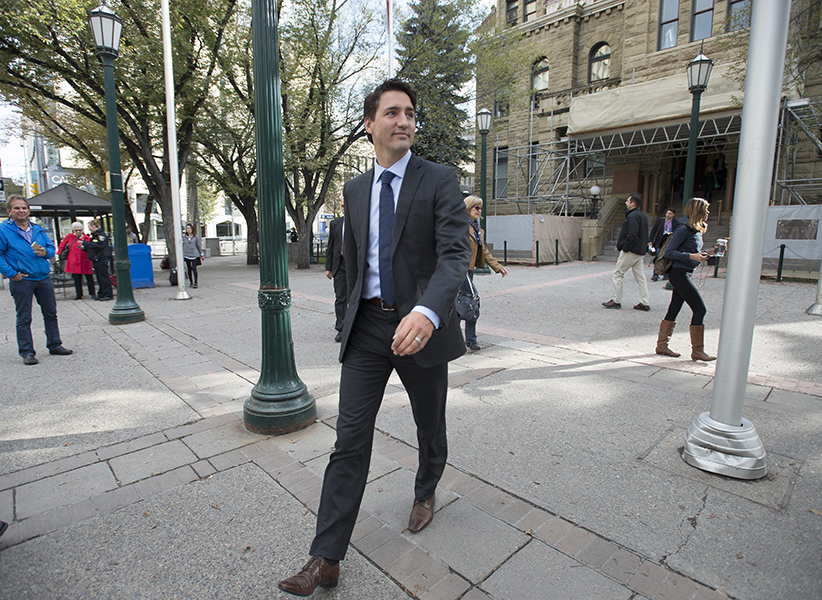 Three hundred people crammed into the former neighbourhood restaurant, transformed into a campaign office. Inside the old Tropical Corner, it was equatorially muggy. The Liberal leader’s right-hand wave revealed a noticeable armpit sweat stain. Another throng was there for Justin Trudeau handshakes and selfies outside, along Calgary’s Centre Street, overlooking the oil patch skyscrapers of a city that has shunned federal Liberals since 1968, when the original Trudeaumania premiered.

“I want to lead Canada. All of Canada, not just parts of Canada,” the Liberal leader said. It was the long campaign’s second afternoon, on the Heritage Day holiday in Alberta, Aug. 3. “I am not going to write off certain parts of the country just because we had a tough past 10 years. Or, tough past 100 years.”

Early in a 78-day campaign, parties could afford to send leaders to long-shot ridings, and make points about how someone then in third place nationally remained willing to scrap in unlikely places. But by then the Liberals had managed to pull two or three Calgary ridings out of the long-shot category and into contention. It’s partly through the charm and sweat of local candidates, partly through the willingness of Trudeau to make repeat visits into this blue lion’s den. In February, he introduced his environmental platform in the wood-panels-on-the-walls Petroleum Club, where père Pierre’s initials PET rhyme all too easily with NEP, the notorious National Energy Program whose taxes and industry nationalization combined with an oil supply glut and high interest rates to keep Calgary and Alberta down through much of the 1980s.

Justin Trudeau and candidates have confronted this family legacy, and stressed that he’s different from his dad—on this file—and he won’t set regions of Canada against each other. Whether or not the Liberals win government, history may record another impressive feat: that it took one Trudeau to exorcise the ghosts of another Trudeau in Calgary.

If he does, he got an assist from time. Anybody in Alberta with adult memory of the NEP is at least pushing 50, and waves of newcomers have made them a minority. In 1985, when Brian Mulroney axed the program, Alberta had 2.3 million people. Its population is now 4.2 million. Depending on which Alberta candidate gets asked, the can’t-vote-Liberal NEP gripes come up at one in 20 doors. Anne McLellan, who first won in Edmonton in 1993 and lost as the last Alberta Liberal in 2006, says NEP mentions have consistently dwindled. By her final campaign, the then-deputy prime minister was starting to get more grumbles from environmentalists over her party’s tax breaks to boost the oil sands, she recalls.

“The NEP is a long time ago, in a galaxy far, far away,” says Kent Hehr, a former provincial Liberal politician running in Calgary Centre, who is relentless at retail politics and the team’s best shot in the city. “It’s a young urban riding in a well-educated city that is seen throughout the world as being an economic and social leader… Justin knows that to govern this country, a seat in Calgary assists him greatly. It gives him credibility and it gives the government, should we form it, credibility.”

Competitive elections in Calgary are making the Conservatives and other parties pay more attention to the city, Hehr says. There was, for instance, a $1.5-billion light rail funding pledge by the Harper government days before the writ drop. Eventually, a city that consistently elects progressives like Naheed Nenshi as mayor would begin to behave politically more like Toronto or Vancouver than like unshakably Tory rural Ontario or Saskatchewan. Most of Calgary’s 10 largely suburban ridings are no-doubter blue, but some feature pitched red-blue battles, especially as the NDP’s Rachel Notley afterglow faded in Calgary and Tom Mulcair’s party receded in national polls. Jillian Ratti, Hehr’s NDP rival, declared this summer that strategic voters should know she’s most likely to become a government MP, but recently posted a YouTube video decrying strategic voting, for obvious strategies of her own. The Notley wave may deliver a seat or two in her Edmonton hometown, though an overriding desire for change may propel Trudeau’s party ahead.

Conservative Joan Crockatt won the 2012 by-election for Calgary Centre with a dismal-for-Calgary 37 per cent of the vote. In boundary changes, the riding shed some Tory-friendly suburbs and gained the progressive boutiques-and-antiques enclave of Inglewood and Ramsay. Many oil patch executives live there, but they dwell alongside (and sometimes are) what one Tory calls “champagne Liberals”—solid donors and coffee-party organizers for Justin Trudeau’s cause. Both sides concede this race will be close.

Directly north is Calgary–Confederation, the new inner-city riding Trudeau visited in early August. Candidate Matt Grant door-knocked consistently enough since 2014 to put the riding into the mix. When Maclean’s joined him for a few blocks of door-knocking, one guy in a car recognized and stopped Grant, followed by a woman bicycling by.

He knows what ghosts linger around the names Trudeau, and Jean Chrétien and Stéphane Dion’s poorly sold and easily weaponized 2008 carbon tax idea. “I know the Liberals don’t have the best record for managing the oil and gas sector, and that’s the reputation we’ve developed,” Grant offers, unprompted, at some doors, before launching into a defence of Trudeau.

The likely more remote shot is in Calgary Skyview, whose heavily immigrant population will either remember the old Trudeau multiculturalism record or may approach the new leader’s surname with no baggage at all.

Many Tories are eager to go 1980s retro, alongside attack flyers that say “Justin Trudeau refuses outright support” for a pipeline. Longtime Calgary seniors still have a “I was there” bitter memory of the NEP. “They remember that the last Trudeau who was prime minister destroyed single-handedly the energy economy of Alberta and Calgary, leading to massive layoffs, huge numbers of bankruptcies and a massive recession in this province,” Calgary candidate and minister Jason Kenney said early in the race. “Not a day goes by when I don’t say: Alberta can’t afford another Trudeau,” says Randy Kerr, Tory campaign manager in Calgary–Confederation.

Some inherited the bitterness from their parents. When Stacey MacDonald, 32, got her first car, her father instructed: don’t get gas at Petro-Canada, once a Trudeau-created Crown Corporation. “You can’t forget it was his dad,” she says. “It’s not a different party, 30 years later.”