Seen as the strategist behind everything Trudeau did, Butts put cutting carbon emissions in its own category 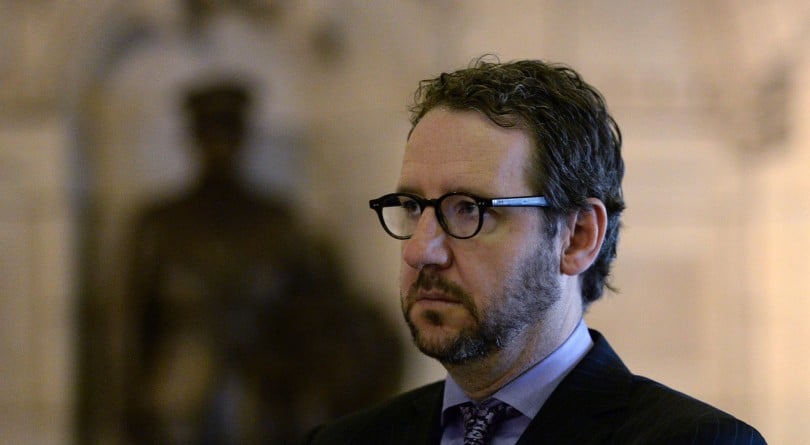 Gerald Butts looks on during a press conference on Parliament Hill in Ottawa on Wednesday, April 30, 2014. (Sean Kilpatrick/CP)

The accepted narrative about any power-behind-the-throne figure is always about raw strategy and never about pure policy. So, when Gerald Butts suddenly resigned yesterday as Justin Trudeau’s principal secretary, attention focused almost entirely on how the Prime Minister would manage without his alter ego around to make stuff happen by way of the dark arts of inveigling and intimidating, cutting deals and taking names.

But in his written resignation statement, Butts injected a personal preoccupation with a single file that isn’t typical for his sort of grand vizier character in a political drama.  “I also need to say this (and I know it’s a non sequitur),” Butts wrote. “Our kids and grandkids will judge us on one issue above all others. That issue is climate change. I hope the response to it becomes the collective, non-partisan, urgent effort that science clearly says is required. I hope that happens soon.”

Skeptics might wonder if that sort of worry can truly run deep for any power broker who manages to rise to the top level. Yet even environmentalist activists who strongly object to the Trudeau government’s approach to the energy-and-environment file don’t doubt that Butts is a believer. “They’ve lost a voice on climate change. His commitment is absolute,” Bruce Cox, who was executive director of Greenpeace Canada from 2005 to 2014, said in an interview.

It’s worth noting that Cox says this even though he rejects the way the Liberal government tried, with Butts as its pinnacle strategist, to balance support for Alberta’s oil sector with a national plan to cut greenhouse gas emissions. “I mean, we’re in a climate crisis and they’re buying a pipeline,” Cox scoffs. He’s referring, of course, to the federal government’s $4.5-billion purchase last spring of the Trans Mountain pipeline—which runs from Edmonton to Burnaby, B.C., just up the coast from Vancouver—in a bid to complete a stalled project to triple its capacity.

Still, buying the pipeline was, Cox concedes, consistent with what Butts has said in private conversations. “He believes—he’s said it to me personally—that we’re going to pump the oil, but we’re going to do it responsibly and properly,” Cox says, quickly adding that he doesn’t think cutting emissions and building pipelines can ever be reconciled. In fact, the trick in trying to understand the approach Butts brought to this core policy concern often amounts to puzzling over how he made apparently incompatible notions fit together.

RELATED: Gerald Butts: Will throwing himself under the bus help or hurt Trudeau?

Butts became a national figure first as a driving force behind Trudeau’s bid for the Liberal leadership, then behind his 2015 federal election win, and finally inside his Prime Minister’s Office. Before then, though, he held two key roles: principal secretary to former Ontario premier Dalton McGuinty from 1999-2008, and president and CEO of the WWF-Canada, the country’s biggest mainstream environmental organization, from 2008-2012.

In McGuinty’s government, Butts was involved with the so-called “greenbelt” policy for protecting farmland, forests and wetlands in southern Ontario, and with phasing out coal-powered electricity plants. As WWF-Canada’s head, he argued that Canada needed to look beyond the oil and gas sector—especially developing Alberta’s oil sands—to renewable alternatives. “While the rest of the world searches for a low-carbon path to growth, we are betting the national economy on a carbon footprint deeper than even conventional fossil fuels,” he wrote.

Butts was also outspoken on the need for rich countries like Canada to take the lead on cutting carbon emissions. In a late-2009 interview, speaking with TVO’s Steve Paikin from a UN climate change summit in Copenhagen, Butts might have been expected to pin the blame for Canadian inaction on then-prime minister Stephen Harper’s Conservative government. Instead, he looked back to the previous decade, when Jean Chrétien’s Liberals were in power in Ottawa.

“This problem fundamentally has its roots in the 1990s, when you had one half of the government trying to make oil sands very economically feasible,” Butts said. “You know, 50 of the top people in Finance Canada, Industry Canada and PCO were trying to figure out how to make oil sands extraction economical, and nobody put environmental concerns on the table within that discussion.” There was no link then, he said, between pro-oil sands policy and thinking around how Canada would achieve its international greenhouse gas emissions reduction commitments.

READ MORE: Butts is gone, but #LavScam rolls on

In a sense, the climate-change policy of the Trudeau era can be seen as an attempt to finally put environment and energy on the table at the same time. It’s not an easy fit. Trudeau has summed the policy up with the word “transition”—a period when oil and gas profits will help fund a shift to a low-carbon economy. The bargain behind getting Alberta’s NDP government to agree to a national price on carbon was that the province’s vast fossil fuel reserves would still be developed.

Imposing that national carbon price against opposition from several provinces now looms as the hottest issue in next fall’s election. Conservative Leader Andrew Scheer says repealing the Liberal climate change plan would be his first priority if he wins it. Arguably the biggest question going into the campaign is how voters in bands of must-win suburban ridings, especially around Toronto, view the notion of a federally imposed carbon tax.

Conservative strategists are confident that those commuter communities will revolt against a Liberal plan that boosts the price of filling up their cars—even though the federal government promises an income tax-based rebate worth more than the out-of-pocket costs of the policy for most Canadians. But Liberal insiders say Butts has contended that Canadian suburban voters—especially parents worried about the world their children will grow up to inherit—tend to be far more acutely concerned about the environment than the Tories imagine.

Butts has been known to point out that, when he was in provincial politics, suburbanites voted Liberal in large numbers when the party was shutting down coal-fired generating stations and establishing a protected greenbelt in their backyards. With Butts gone, taking that unique mix of campaign and policy experience with him, the question is whether the Liberal climate-change message will stay the same—or shift into some post-Butts mode before Canadians vote next fall.