For the record: Justin Trudeau on breaking his electoral reform promise

"Much as I understand what you say about cynicism... I recognize a higher responsibility" 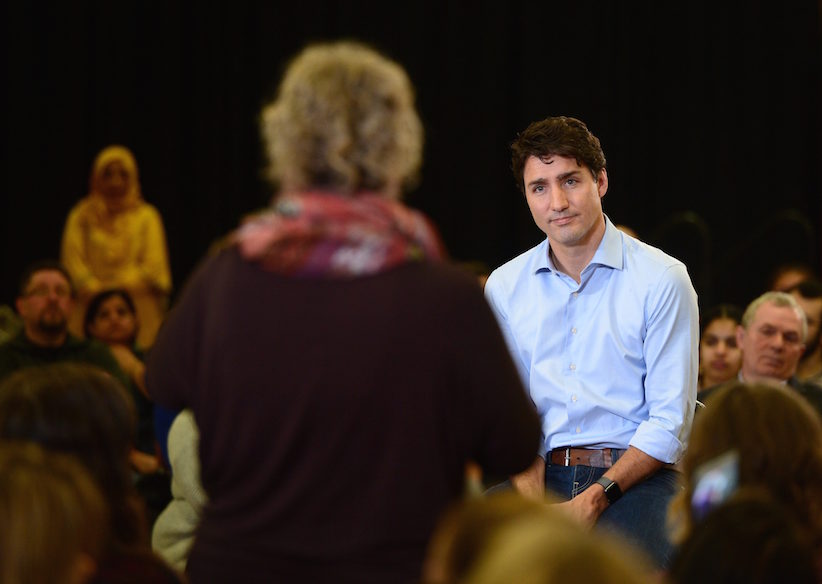 Answering a question at a town hall meeting in Yellowknife today, Justin Trudeau gave his most complete answer yet on why he broke his election promise to bring about sweeping electoral reform.

The question put to the Prime Minister wasn’t, in fact, exactly about that controversial about-face by the Liberal government. Trudeau was actually asked about fostering cynicism concerning politics by failing to follow-through on such a clear commitment.

But he used the moment to give his most detailed response to date on the issue. Trudeau took special aim at proportional representation—favoured by the NDP and the Greens—under which a party’s share of seats in the House would more closely reflect its slice of the total vote. He argued this would mean unsavoury fringe parties would gain a place in national politics—a danger proponents of proportional representation argue can be safeguarded against in the design of the system.

He also touted his own preference for a ranked ballot system, even though his government didn’t formally propose a system of this sort before he abandoned his firm commitment to have the 2015 election be the last one waged under Canada’s traditional first-past-the-post system. And he again took aim at the Conservative demand for a referendum on any fundamental change in how Canadians elect their MPs.

This is an edited transcript of Trudeau’s remarks at the Yellowknife town hall:

Electoral reform, changing the way we vote, is a big change that could have far-reaching consequences for our country and needs to be taken very, very seriously. It’s more than just who might win a few more seats in the next election. It goes to fundamentally how we operate, how we value and how we hear diverse voices within our Parliament.

And for me—and I’ve been arguing this since long before I became leader—I always felt that we could make a clear improvement to our political process by offering people to not ever have to vote strategically again, to give a preference on your ballot. To rank your ballot. A lot of people don’t like it. A lot of people say it favours Liberals.

What it does is it favours parties who are good at reaching out to find common ground with broad groups of Canadians, to say, “How can I be your second choice?” That’s what it does. I think that’s probably a good thing, but I have heard very clearly that people don’t think that’s a good thing, or that they think it would favour Liberals too much. And therefore I’m not going near it, because I am not going to do something that everyone is convinced is going to favour one party over another.

So then we get down to the remaining choices. We’ve seen recently what happens when referendums go, whether it’s Brexit, whether it’s the Italian one. There is a lot of divisiveness, particularly on an issue that is very important to a small number of people, but not nearly as important as jobs and health care and educational opportunities and reconciliation and a whole bunch of other issues too.

And the danger of a division within the country and a campaign that is likely to get a lot of heated rhetoric at a time where we’re looking for stability in the face of a very unpredictable and unstable political context around the world. I don’t think a referendum is the right way to go.

And then there’s proportional representation, which is the one a lot of people like. One of the things that’s great about Canada, and I’ve talked about it a few times, is we’re a country that focuses on common ground. We’re a country that focuses on the things we have in common with each other, even though we’re different… There are more differences within Canada, within Canadians, than within just about any other country in the world, and yet better than any other country in the world, we’ve figured out how to make those differences a source of strength.

And if we were to make a change or risk a change that would augment individual voices, that would mean extremist voices, and activist voices that don’t get to sit within a party that figures out the best path for the whole future of the country, like the existing three big parties do, I think we’d be entering an era of instability and uncertainty, and we would be putting at risk the very thing that makes us luckier than anyone else on the planet—the fact that we look at our differences as something to draw on and discover and build on, as opposed to emphasize and highlight.

So for me, as strongly in this as I believe that we could move forward on improving our electoral system, and as much as I understand what you say about cynicism where someone saying they’re going to keep a promise and then not being able to keep that promise, I recognize a higher responsibility even than that. And that is the responsibility every Canadian prime minister has to keep this country together and united and focused on the things that unite us rather than the things that divide us.