For the record: Trudeau on his new cabinet and the disgruntled West

He touts his working relationship with Freeland, his new natural resources minister, and innovation in Alberta and Saskatchewan 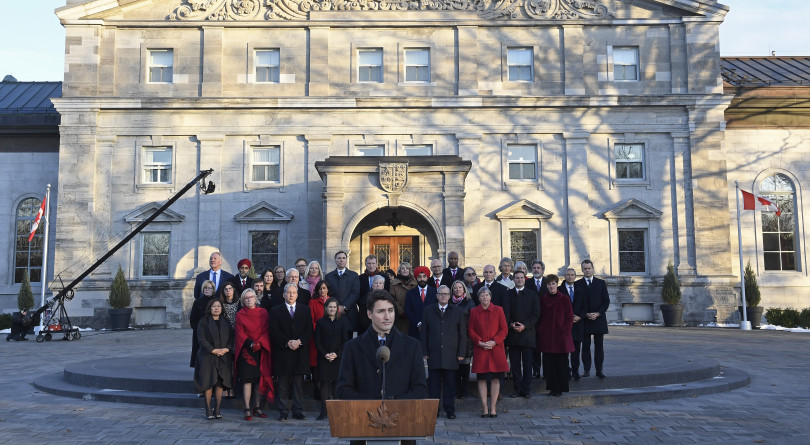 Trudeau speaks following the swearing-in of the new cabinet at Rideau Hall in Ottawa on Nov. 20, 2019 (THE CANADIAN PRESS/Adrian Wyld)

After the swearing in of his new cabinet this afternoon, Prime Minister Justin Trudeau answered questions from reporters on the steps of Rideau Hall. A lot of the questions touched on the tensions between Trudeau’s new minority government and Alberta, where his Liberals failed to elect an MP in this fall’s election. Here are three key quotes from Trudeau relating to that pressing problem:

On Chrystia Freeland becoming his deputy prime minister and intergovernmental affairs minister, a role in which she’s expected to try to address Western alienation. (She is also retaining, unusually, responsibility for the Canada-U.S. relationship, her focus in her former job as foreign minister):

“There were no more important issues than renegotiating NAFTA in our first mandate, and I worked very closely with Chrystia on that issue, and I can tell you we work very well together. Having her in a position, a strong position, when it comes to international affairs and intergovernmental affairs, and having her as deputy prime minister, will be very positive for national unity and for our approach to uniting Canadians and creating economic growth, and of course fighting climate change at the same time.”

On his friend Seamus O’Regan becoming natural resources minister, a key job for the Western provinces, and one held from 2015 to 2018 by Manitoba MP Jim Carr, who has cancer but will remain, Trudeau announced today, his special advisor on the Prairies:

On how Alberta’s oil sands fit with his government’s priorities, considering that combatting climate change  by reducing fossil fuel consumption remains a key Liberal priority, and Trudeau’s Liberals failed to elect an MP this fall in Alberta and Saskatchewan, leaving the provinces unrepresented in the cabinet named today:

“We recognize that the people who work in the oil sands have been providing energy and resources to Canada for many decades in a way that has created tremendous prosperity for this country. The world is looking at reducing its carbon emissions, and as we move toward a lower-carbon economy it’s going to be important to lean on the kind of innovation and technology that Albertans and Saskatchewanians, and people right across the country, have been contributing to creating and delivering for the benefit of all Canadians.”