A middle class message was straight out of the Liberal playbook, paired with windfalls for municipalities, senior citizens and students 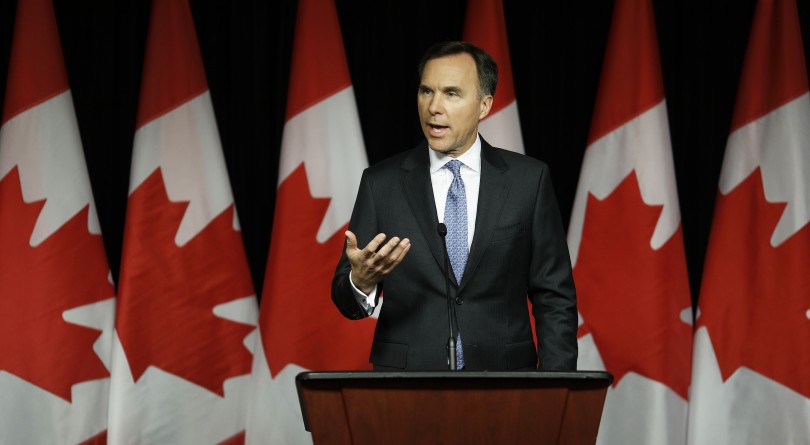 There was nothing understated about the way Finance Minister Bill Morneau signalled how he wanted the thrust of his 2019 federal budget to be understood in this election year. Its title: Investing in the Middle Class. The title of its first chapter: Investing in the Middle Class. And Morneau proceeded to cram that same five-word phrase no fewer than three times into the first minute or two of his budget speech.

But words are one thing and numbers are another. Most pre-budget speculation had focused on a few government priorities on which big new spending was widely anticipated. Training was such a prominent Liberal preoccupation that there was talk of labelling this a “skills budget.” Paving the way for pharmacare was generally expected to be the signature social measure in the mix. Various versions of how the government might help first-time home buyers were energetically kicked around.

Indeed, all these highly touted elements found their way into Morneau’s blueprint for taxing and spending in this election year. None of them, though, cracked Budget 2019’s Top Five items in terms of how much new money the Liberals put on the table. For instance, the biggest unexpected windfall went to municipalities—$2.2-billion to fund short-term infrastructure priorities, from local roads to regional airports, sports facilities to disaster mitigation, wastewater and community energy systems.

Next in dollar value was $1.8-billion over four years, starting in 2020-21, to enhance the Guaranteed Income Supplement. That sure didn’t generate any advance buzz, although it didn’t come out of the blue either. Arguably the most overlooked major social-policy thrust of Prime Minister Justin Trudeau’s government has been boosting GIS benefits to about 900,000 low-income seniors. Budget 2019 builds on that by expanding the GIS earnings exemption, letting seniors who don’t earn a lot, but are still working, take home more money.

The third largest spending initiative—$1.7 billion over six years—will see students who borrow for post-secondary education pay less interest while they’re getting rid of that debt. Morneau promised to cut the floating interest rate, which most students choose to pay on their loans, to prime from the current prime plus 2.5 percentage points. As well, the government pledges to introduce a grace period of six months after a student leaves school before interest costs start to pile up.

Despite those hefty dollar figures, nobody was calling this the Municipal Small Infrastructure Budget, or the Low-Income Working Seniors Budget, or the Pay Off Your Student Loan Budget. Yet those constituencies hardly lack political clout. As the federal Liberals face a raft of new, unfriendly provincial governments, city politicians tend to remain key allies. Seniors are, as always, reliably inclined to vote. About a million former students who are already repaying their loans, and another 200,000 who leave school every year, might well appreciate the party that’s giving them a break on their debt loads.

Morneau offered all this and more against the backdrop of political turmoil, as Trudeau’s Liberals endure the ongoing, brand-damaging SNC-Lavalin affair. The economy is also refusing to cooperate with the government’s hopes for an upbeat mood heading toward the October election. Canadian economic growth slumped in the last quarter of 2018 and most private sector economists expect only tepid growth in the first three months of 2019.

Still, Morneau was able to point to some undeniably positive data since the Liberals won the 2015 election, particularly the more than 900,000 new jobs created. And his fourth budget as Trudeau’s only finance minister to date predicted that the Canadian economy will strengthen again in the second half of this year, and then stay strong for the following two years. That outlook allowed him to forecast the deficit dropping from $19.8 billion in 2019-20, to $14.8 billion by 2021-22, and then keep trending lower. It’s still a lot more red ink than Trudeau’s 2015 campaign promise to balance the books after just three years of modest deficits—and bound to remain a favourite point of attack for the Conservative opposition.

But Morneau left little doubt that the Liberals will be running hard on some of the themes for which his budget, in fact, allocated relatively modest amounts. A new Canada Training Benefit—named to echo the Liberals’ popular Canada Child Benefit—will give workers the ability to take up to four weeks of paid leave at 55 per cent of their annual weekly earnings and be assured their job will be waiting for them when they’re finished.

He made a sort of down payment on what appears to be a plan to eventually create a full-fledged national pharmacare plan. The federal government will set up a new Canadian Drug Agency to work with provinces to try to coordinate an approach, and to establish a “national formulary” of prescribed drugs . As well, there’s a strategy for paying for high-cost drugs for rare diseases. “This is an important first step,” the budget said, “in expanding drug coverage through federal support.” As for home buyers, there is a new incentive, which the budget said is expected to help about 100,000 first-time home buyers who qualify.

It all adds up to a modest $4 billion, for fiscal 2019-20, in new measures from this budget—not exactly an election-year spending gusher, considering overall federal program spending is nearly $330 billion. The might suggest the Liberals didn’t really set out to use this budget to change the channel from the SNC-Lavalin saga.

They have other options. On the day before the budget, Trudeau rose in the House to deliver a speech reflecting on the horrific mass shooting at a mosque in New Zealand. “Toxic rhetoric has broken into the mainstream. It’s anti-Semitic, Islamophobic, anti-black, anti-Indigenous, misogynistic, homophobic—the list goes on and on,” Trudeau said. “When we fail to denounce hatred with total conviction, we empower those people and legitimize their violence.”

It was by far the most forceful the Prime Minister has sounded since the SNC-Lavalin story broke a few weeks ago, plunging him into his worst crisis yet as prime minister. There was nothing like that fire, of course, in Morneau’s budget speech. How could there be? But, taken together, the two speeches, delivered on consecutive days, left the impression the Liberals might be preparing to run less on “investing in the middle class,” than on Trudeau’s claim to representing moral leadership in testing times.