Gerald Butts: If thy right hand offend thee, pluck it out

Paul Wells: The Prime Minister will now have to find out if he can work without Butts. In a crisis, in an election year. The timing isn't great. 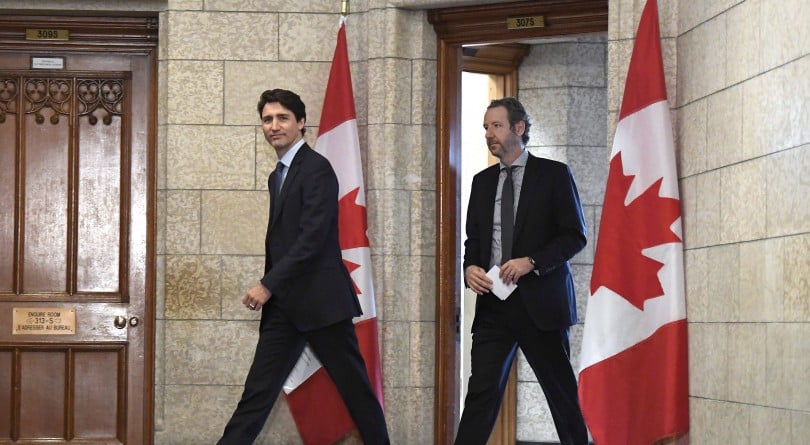 Trudeau leaves his office with his principal secretary Gerald Butts to attend an emergency cabinet meeting on Parliament Hill in Ottawa on Tuesday, April 10, 2018. (Justin Tang/CP)

At any other time it’d be interesting to entertain a few notions of comparative PMO staffing.

Brian Mulroney and Stephen Harper shook up their senior staff regularly: Mulroney’s principal secretaries included Peter White, Tom Trbovich, Michel Roy and Hugh Segal; Harper made more frequent changes to his chiefs of staff but when Ray Novak moved up to that role, Harper had no trouble replacing him as principal secretary. Jean Chrétien did without anyone in the role altogether. Paul Martin resuscitated the role but he didn’t know the people in it—Francis Fox, Hélène Scherrer—as well as he knew much of his entourage. This isn’t a science. As a very strong rule of thumb, irreplaceable lieutenants are usually replaceable.

But this isn’t any other time. This Thursday we’ll be eight months from a federal election. Gerry Butts hasn’t been far from Justin Trudeau’s side at any time since Trudeau entered public life. The first time I ever heard Butts’ name, it was from a mutual acquaintance who assumed Butts had written Justin Trudeau’s famous speech for Pierre Trudeau’s funeral 18 years ago. He did or he didn’t, but what matters is that they were inseparable even then.

I first took the notion of a Trudeau candidacy for the Liberal leadership seriously when, at a conference in 2012, I heard Butts taking it seriously. Trudeau could probably work without Butts. But even Liberals who have been hoping for such an outcome, over the last year, have assumed Trudeau doesn’t think he can work without Butts. And now he has to find out. In a crisis, in an election year. The timing isn’t great.

Because Butts is an incorrigible loudmouth on Twitter (as am I), it’s been possible to imagine he played an even bigger role than he did. Katie Telford, the PMO chief of staff, has been as central. I’ve rarely seen one without the other, either in public or in photos, and large parts of this government’s agenda and style are her work. Others—Kate Purchase, Mike McNair, Justin To, Zita Astravas and more—have played important roles either in the PMO or as its de facto emissaries to important ministers’ offices.

Listen to Paul Wells talk about Butts’s relationship with Trudeau on The Big Story podcast.

The extent of the prime minister’s own involvement in his government’s decisions has been a matter of speculation. The best insight we have into that is the 2017 report of the former ethics commissioner,  Mary Dawson, into Trudeau’s vacation with the Aga Khan. She wrote: “The meetings he attends as Prime Minister are not business meetings. Rather, they are centred on relationship building and ensuring that all parties are moving forward together. Specific issues or details are worked out before, subsequently or independently of any meeting he attends.” I don’t want to treat that report as  gospel, but Dawson is a serious person and I’ve never seen such a thing written about any other head of government. And that’s the context within which Liberals, and all Canadians, will be watching Trudeau’s performance in this strange new world.

In highly charged partisan environments it’s inevitable that anyone close to a party leader will be inflated into an ogre by opponents and even by some armchair theorists of government. Shadowy counsellors make excellent bogeymen. Butts encouraged that tendency by cheerfully writing silly things about the Liberals’ opponents on social media. I think many people would be surprised what a soft-spoken, amiable figure he strikes. (He also once took a photo of me with Trudeau that I’ve never liked.)

Like most Ottawa journalists I’ve had to decide, basically every few weeks since 2013, whether to call Butts for the inside scoop on the thinking in Trudeau-land, or whether to skip that call and basically guess. Butts has very frequently been the “senior Liberal” in too many stories that only quote one, and he is not pleased if there’s any quoted who isn’t him. For long stretches—2013-2016 and again since last autumn—I’ve preferred not to call. He would describe fascinating things—deliverology, a coming whole-of-government effort against opioid overdoses, a functioning and useful Canada Infrastructure Bank—that didn’t actually come to pass. Butts is a romantic about the possibilities of government. Government very often does useful things, but it tends to defeat romantics.

In a similar role in Dalton McGuinty’s Ontario provincial government 15 years ago, and again in Trudeau’s, Butts has tended to believe a government with its heart in the right place needn’t count pennies. Both governments have followed similar trajectories, kicking up vast clouds of taxpayer dollars in the hope that it would act as a general anesthetic against voters’ critical faculties. In Ottawa more than at Queen’s Park, there was the additional challenge of making anything run at all when most serious decisions—by many, many Liberal staffers’ own account—were badly bottlenecked outside Butts’ and Telford’s office. “You can actually run a provincial government with about five people,” a former public servant with experience in both federal and Ontario governments told me soon after the Trudeau government set up shop. “You can’t run Canada that way.”

A serious reform of the way this government governs would be an interesting order of business at any other time. Bringing in somebody with a very different vision of the role of government, to streamline and decentralize Trudeau’s, and to jettison the endless moral preening that characterizes its every self-congratulatory communiqué, would be an interesting project. I have in mind somebody like Scott Brison. I promise you it won’t happen.

On the SNC-Lavalin/ Jody Wilson-Raybould scandal—as on the less prominent but still ominous trial of Vice-Admiral Mark Norman for breach of trust, quickly turning into a virtual countersuit against the government—I have no secrets or insights. I’d honestly be surprised if Butts is found guilty, or even credibly accused, of wrongdoing. But one way or another, we will assuredly all eventually find out.