The PM's former right hand voiced respect and affection for Jody Wilson-Raybould. Then he contradicted her. 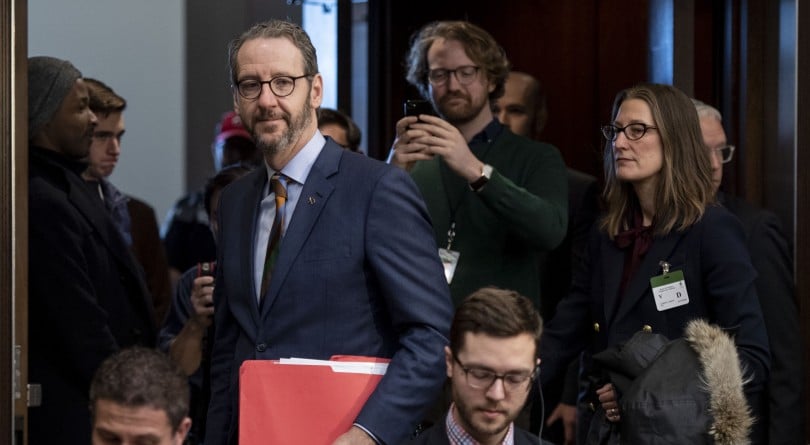 It’s easy to picture Jody Wilson-Raybould’s testimony before the House of Commons justice committee last week as a series of calendar squares—days on which she painstakingly laid out, like the prosecutor she is, a series of phone calls and in-person meetings she perceived as a “barrage” of attempted political interference in the SNC-Lavalin case over the course of four months last fall.

When Gerald Butts, until recently principal secretary to Prime Minister Justin Trudeau, appeared before the same committee on Wednesday, he sought to strike an X through some of those squares, disputing that certain things unfolded as she said they did, or at all, but treading ever so carefully around anything close to calling her untruthful. He delicately recast a few other of those squares with more nuance, allowing for the fact that people could interpret events and conversations very differently.

But in what Wilson-Raybould depicted as a “consistent and sustained” pattern of political meddling, there were calendar squares Butts did not directly contradict. He recused himself, reasonably, from commenting on conversations in which he was not involved, and his rebuttal of others boiled down to the fact that he knew the players involved and did not believe their integrity would allow them to operate as they were said to have done.

He also took pains to emphasize—as Trudeau has done, in what little he has said in direct response to Wilson-Raybould—that at no point did the former attorney general raise her voice or put pen to paper in order to tell anyone in the PMO to back off, or even that she felt they were out of line in the first place.

Except for a couple of tense exchanges with opposition members of the committee near the end of the two-hour session, Butts’s tone was respectful, conciliatory and even elegiac. It was clear that he arrived in that committee room, which feels oddly subterranean despite being a huge space located on the fourth floor of a slickly refurbished government building, acutely aware that it would be politically disastrous for him to look like he was impugning Wilson-Raybould in any way.

“This is a story of two people who hold high office—the Prime Minister and the former attorney general—both of whom did their jobs to the best of their abilities, as did their respective staff,” Butts said early on in his remarks. “However, a breakdown in the trust that held the relationship together occurred, and as the point person in PMO for the attorney general, I take responsibility for that breakdown.”

If there was a running theme through Butts’s testimony, it was a line of neon tubing that arranged itself to spell out “JOBS JOBS JOBS.” He mirrored the central argument the Liberals have advanced for more than a week: that there were so many jobs on the line—not just in Quebec, but across Canada—that the PMO and officials felt it was necessary to be very, very sure that SNC-Lavalin didn’t qualify for some kind of legal break.

RELATED: The Butts testimony: Have I mentioned the 9,000 jobs?

It was in that light that Butts explained efforts to get Wilson-Raybould to seek an outside legal opinion, even though she seemed bent on sticking with the decision of the director of public prosecutions (DPP) not to invite the company to negotiate a remediation agreement.

It was not about second-guessing Wilson-Raybould, Butts said, it was about making sure she had the best possible information on which to base her decision. Everyone involved  knew it was her call to make, he said, and they made it clear that even if she were to follow their recommendations and seek outside legal counsel, such as from a former Supreme Court justice, that she was then free to accept or reject whatever advice came of that.

“When 9,000 people’s jobs are at stake, it is a public policy problem,” he said. “It was our obligation to exhaustively consider options the law allows and to be forthright with people in explaining the attorney general’s decision, in order to be able to demonstrate that the decision was taken with great care and with careful consideration of their livelihoods.”

Butts effectively argued that Wilson-Raybould could not possibly have considered the issue fully, because she simply didn’t have time. He walked the committee through the chronology she presented last week: that she learned of the DPP decision on Sept. 4, while she was out of the country, then she returned on Sept. 12 and her mind was made up by Sept. 16.

“In that version of the events, the attorney general made the final decision, after weighing all of the public interest matters and a new law involved, in just 12 days,” Butts said.  “Imagine for a moment that on September the 16th—the day the former attorney general told this committee the decision was made, firmly and finally—that she made a public announcement to inform Canadians of that decision. What would be the rationale?”

However—and this was key to the former principal secretary’s argument that it was never made clear last fall to anyone involved that the attorney general was feeling harangued by the ongoing conversations about SNC—Butts said he had no idea that she had made up her mind then. He first learned that fact during her testimony last week, as the rest of the country did, he said, and his “understanding” is that no one at the PMO or PCO knew at the time, either.

That directly contradicts Wilson-Raybould’s testimony, in which she recounted a mid-September meeting with the clerk of the Privy Council and the Prime Minister: “I told him that I had done my due diligence and had made up my mind on SNC and that I was not going to interfere with the decision of the director,” she said.

Near the very end of Butts’s two-hour committee session, Elizabeth May, the Green Party leader, had a chance to ask a few questions. The committee chair, Anthony Housefather, stumbled over a few formalities while introducing her, and May requested that, since she and Butts have been friends for years, they just use first names to address each other.

Then she asked Butts if they had sought any independent evidence that those 9,000 jobs really were at risk if SNC-Lavalin had been forced to face the legal music. She came prepared to show her work.

“This is all riding on the threat to jobs, but based on the 2018 audited financial statements of SNC-Lavalin, they currently have $15 billion in back-orders. They have a very secure financial situation, with gross revenues of $10 billion,” she said. “Is there any evidence that jobs were actually at stake by letting this go through the courts and letting the independent director of public prosecutions do her job, and the attorney general also do her job?”

“That’s my understanding from Department of Finance briefings. But I have to say, it’s been a long time,” Butts said, trailing off and pausing awkwardly for a second or two. “Yeah, I can’t recall anything specific.” Then he paused again and, with a chuckle, addressed his friend as she’d requested: “Liz.”