Politics Insider for June 12: The politics of extreme weather, advance polls get a boost and USMCA debate gets underway 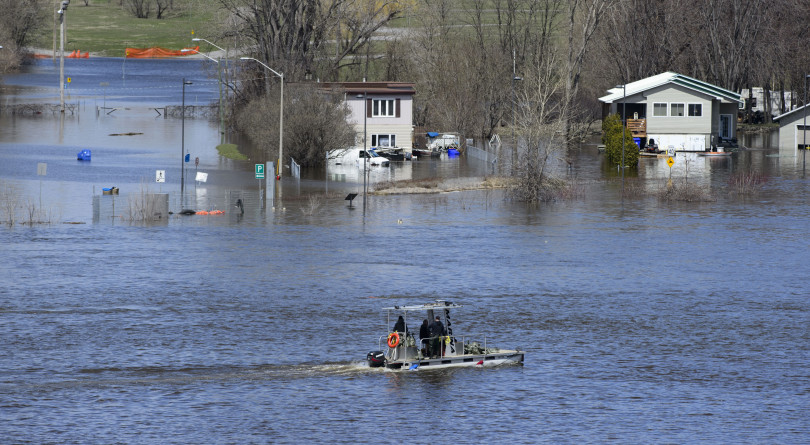 Homes along the Ottawa River in Gatineau, Que. are flooded on Tuesday, April 30, 2019. (Sean Kilpatrick/CP)

Exactly what it would take for climate change to become a powerful vote-driving issue isn’t clear. Increasingly urgent warnings from scientists stretch back at least to the 1992 Rio de Janeiro Earth Summit, when the United Nations Framework Convention on Climate Change was hatched. In the 2008 federal election, then-Liberal leader Stéphane Dion ran on his “Green Shift” plan to tax carbon—and lost badly. But maybe successive years of fire and flood and weird weather will turn out to matter where solid science and innovative policy proposals failed. There are hints that in places where climate change already feels like an undeniable local problem, attitudes change. (Maclean’s)

The link between climate change and extreme weather events ensnared one Conservative MP Tuesday and raised questions again about where Andrew Scheer stands on the issue. After MP Lisa Raitt tweeted out a quote from University of Guelph economist Ross McKitrick arguing “there’s no solid connection between climate change and the major indicators of extreme weather, despite Trudeau’s claims to the contrary,” she was taken to task by climate scientist Katharine Hayhoe and deleted the tweet, saying “I’m not the one to fight with on this because like most I believe that emissions cause climate change and we should reduce emissions.” Does her boss? In a response to questions from the Huffington Post, Scheer’s office said the Conservative leader believes climate change is real and requires action, but avoided the question of whether it is linked to extreme weather events and human activity. Instead Scheer’s office went on the attack again against Trudeau’s “punishing, job-killing carbon tax.” (Huffington Post)

Meanwhile in Ontario, Premier Doug Ford remains intent on deploying the resources of the provincial government to defeat Justin Trudeau and his climate change-fighting efforts this fall. Proposed regulations will force gas stations across Ontario to post anti-carbon tax stickers on all pumps by Aug. 30, and threatens to punish any businesses that fail to abide by the regulation with fines of $10,000 per day. (Canadian Press)

Disunity: After six right-leaning premiers warned Trudeau that Canadian unity is threatened by two environmental bills—one banning tankers off B.C.’s northeast coast, the other reforming environmental assessments of major projects—Trudeau shot back, saying the claim was “absolutely irresponsible … What we will not do is accept the premiers’ saying ‘There is a threat to national unity if we don’t get our way. That is not the way to hold this country together.” (Canadian Press)

Vote early (but still only once): Elections Canada is making it easier for Canadians to vote in advance polls in the upcoming federal election. With advance voter turnout at record levels in Alberta during the last provincial election, Elections Canada is hoping for a repeat by extending polling station hours from 9 a.m. to 9 p.m. during the four-day early voting period, doing away with the requirement that voters sign their ballots and letting polling station workers start counting advanced ballots early on election day.  (Postmedia)

Under the influence: Not all of Elections Canada‘s voter outreach efforts are going over well. Conservatives accused the agency of trying to fix the election for the Liberals by encouraging more young people to vote, since younger voters tend to swing left. The plan that has Conservatives vexed is Election Canada’s hiring of 13 as-yet-unnamed social-media influencers to encourage youth voting. The agency says it will reveal the 13 individuals on June 25, but Conservative MP Pierre Poilievre wants them named now and the program cancelled, calling the agency “Liberal lapdogs” (Globe and Mail)

Better than nothing: With the clock ticking before the House adjourns for the summer on June 21, MPs began debating a bill to ratify the USMCA trade deal. The bill’s fate isn’t in question. Both the Liberals and Conservatives have said they’ll vote in favour of the ratification legislation, but the Conservatives are making it known they’ll hold their noses when it comes time to vote: “We do need a deal, there’s no question about that, but the concern is that this Liberal government walks around talking about what a great deal it is, and that’s definitely not the case,” said Conservative MP Dean Allison, the vice-chair of the House International Trade Committee. “What stakeholders and what people have told us is that a deal is better than no deal and that’s why the Conservatives are going to be supporting this.” (CTV News)

Group effort: How many bureaucrats and senior military officers does it take to write a letter? Twenty, apparently. Postmedia reporter David Pugliese details the bloated effort by the Department of National Defence to shut him down from covering the infamous ‘Party Flight‘ of 2017. After Pugliese’s initial reporting, officials launched their mission to craft a 277-word letter to his bosses claiming (incorrectly) that Pugliese’s reporting was erroneous with the hope—according to access to information documents—that he’d be ordered to drop the story. Instead the reporter took it as a cue that DND was worried more details would come to light, so he kept digging—and revealed the full cost to taxpayers for the Party Flight: $337,000. No word yet on the price tag for having more than a dozen officials and social media experts spend four hours writing a letter. (Ottawa Citizen)