Politics Insider for May 7: Final byelection before October vote, the Scheer Conservatives have an intolerance problem and Canada-U.S. tensions flare up 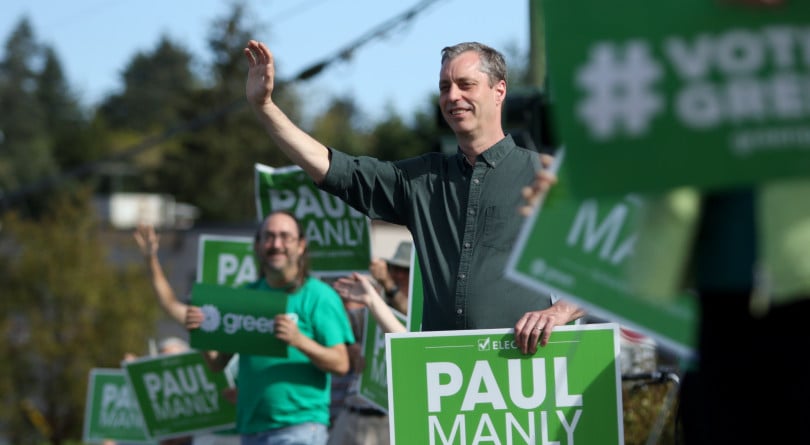 Green party candidate Paul Manly works right up to the end as he takes part in sign waving with supporters near his campaign office before the polls close in the Nanaimo-Ladysmith byelection in Nanaimo, B.C., on Monday, May 6, 2019. (Chad Hipolito/CP)

And then there were two: For the next few months at least Elizabeth May has some company in Parliament. Green Party candidate Paul Manly came out on top in the byelection for Nanaimo-Ladysmith in B.C. last night, the final federal race before this fall’s general election. It was the latest sign of a Green shift among left-leaning voters. As of last night the Greens held around 38 per cent of the vote. The NDP, which won the riding in 2015, tumbled to third place (with 23 per cent) behind the Conservatives (25 per cent), while the Liberals fell from second place to fourth (with 11 per cent).

Go here for the latest results from Nanaimo-Ladysmith.

In case you missed it last week Anne Kingston explored the rise of May’s Greens and the impact they may have come October. (Maclean’s)

Needless to say, Conservative leader Andrew Scheer could take comfort from how things turned out last night, even if his candidate didn’t win.

Trouble in Toryland: Yet while Scheer’s Conservatives enjoy a solid lead in the national polls, the Tory leader has left himself open to charges of intolerance—a vulnerability the Trudeau Liberals are intent on exploiting by making racism an issue in the election. For the cover story of the latest Maclean’s print issue, John Geddes and Jason Markusoff examine how Scheer has allowed bigoted and xenophobic views to become attached to his party, and what he’ll have to do to fight them off. (Maclean’s)

Still, for many voters, Scheer remains an undefined entity fully two years after being chosen as Conservative leader. Over the next six weeks Scheer will try to fill in the blanks through a series of policy speeches, starting today with a speech in Montreal on foreign policy. As the Globe and Mail‘s Campbell Clark writes, the speeches are intended to show “that there’s a there there, and that he is a leader with ideas about where to take the country.” (Globe and Mail)

Going ballistic: Scheer’s first policy pledge: that Canada will begin talks with the Trump administration to join a U.S. missile defence program, something which Liberal and Conservative governments going back to 2005 have refused to do. In January President Donald Trump revealed his plan to build a new space-based missile defence system, and warned allies like Canada will have to cough up for protection. (Toronto Star)

Showdown: Staying with the military theme for a moment, the U.S. delivered an ultimatum to Canada about the F-35 fighter jet and the Trudeau government’s $19-billion competition to replace its ageing CF-18s. The competition requires the winner to reinvest some of the money it receives back into Canadian aerospace industries, whereas companies from the partner countries that signed on to the F-35 program in 2006 must compete for work on that project, with no guarantee of success. (Canadian Press)

But far from punishing the Canadian government, the move by the Trump administration may just have given Prime Minister Justin Trudeau the opportunity he’s been looking for to bail on Canada’s F-35 commitments for good. (Ottawa Citizen)

When it rains Canada-U.S. tensions, it pours: In a major speech Monday U.S. Secretary of State Mike Pompeo said Canada’s claim to the Northwest Passage is “illegitimate” which, as you might imagine, didn’t go over well. (Canadian Press)

The Norman trial 101: The revelation that outgoing-Liberal MP and former military officer Andrew Leslie plans to testify against the government in the upcoming breach of trust trial of Vice-Admiral Mark Norman provided fodder to Conservatives in Question Period Monday, with the opposition accusing the Trudeau government of having a personal vendetta against Norman. But if you’re feeling lost when it comes to the court case, which is set to begin just as the federal election campaign gets underway, Matt Gurney explains the roots of the case:

It’s not surprising Leslie would choose to leave politics. It is somewhat surprising that the Liberals may soon find themselves once again taking fire on legal matters from a well-respected, highly credible member of their own caucus.

But what is absolutely surprising is just how dysfunctional and bizarre the entire story is. In a weird way, we can trace this all the way back to former prime minister Paul Martin. The story is that twisted and long. (Maclean’s)