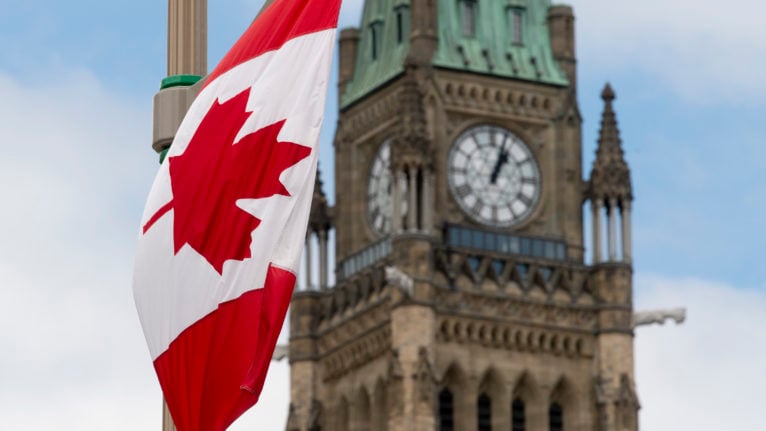 A Canadian flag hangs from a lamp post along the road in front of the Parliament buildings ahead of Canada Day in Ottawa, Tuesday, June 30, 2020. (Adrian Wyld/CP)

Today is Canada’s national day. It’s also the first day the new NAFTA, which every signatory calls something a little different, comes into force. The U.S. trade representative, Robert Lighthizer, might decide to slap aluminum tariffs on Canadian exporters. Anxious trade-watchers should keep refreshing his website.

The clock is ticking: Five senators from Nova Scotia are insisting that Public Safety Minister Bill Blair and Mark Furey, Nova Scotia’s minister of justice, should call a federal-provincial public inquiry into the mass murder of 22 Nova Scotians in April. They say the lack of an inquiry is “fomenting speculation” and risks eroding public trust in law enforcement.

On June 25, Maclean’s asked Prime Minister Justin Trudeau if he would call an inquiry. Trudeau acknowledged “many questions about the role of domestic violence, about the situation where the shooter was able to get his hands on police vehicles and kit.” He reiterated the feds are working with the province on “a process whereby those questions get answered for the families, for the communities, for Canadians across the country.” On timing, he’d only say the feds “hope to have things to announce in the coming days.” The killing spree came to an end 72 days ago.

The parliamentary budget office’s latest report tallies the estimated cost of the Canada Emergency Business Account, the federal relief program meant to offer liquidity to business owners whose revenue plummeted in March—and, in most cases, is still recovering. The PBO pegs the CEBA’s hit to the treasury this year at $9.3 billion—about two-thirds of the Department of Finance’s own estimate. (The federal numbers have shifted over time. Track the differences between an April 22 backgrounder that listed all COVID-19 emergency spending and the updated fiscal summary, which includes several major revisions.)

America is woefully unprepared for mail-in voting: The result, as states scramble to develop the capacity to send out and take in millions of ballots before the November election, will be messy and divisive, writes Michael Fraiman in Maclean’s.

The United States, unlike Canada, lacks a single, cohesive agency for administering elections; they’re instead handled on a hyper-local level, down to the jurisdiction, of which there are more than 10,000 across the country. That’s 10,000 different groups organizing their own resources, staffing and communications. The added cost of COVID protective supplies, such as plastic barriers and hand sanitizer, has disrupted plans and budgets. In March, Congress earmarked US$400 million to help. But elections experts estimate the nation may require as much as $2 billion.

What is he looking at? In a classic superhero pose, Peter MacKay repeated a pledge to “kill” the federal carbon tax and build more pipelines. There was no “how to get it done” infographic that followed, much to the chagrin of a certain former director of communications to a certain former prime minister.

They aren’t the Snowbirds, but… If you’ve heard what sure look and sound like fighter jets flying above Ottawa, your eyes and ears aren’t broken. For the past few days, German-made Alpha jets—light attack and training aircraft roughly as old as Canada’s CF-18 fleet—have flown over the city on the way to training missions in the skies above CFB Petawawa. The planes are owned by Top Aces, a Montreal-based company that trains Air Force pilots. (No word on whether or not the vintage biplane that tours tourists over downtown Ottawa is jealous of the competition for the skies.)

Canada has its first-ever Muslim vice-regal representative. Trudeau appointed Salma Lakhani as the new lieutenant governor of Alberta. In 1972, Lakhani’s family was expelled from Uganda. She’s lived in Edmonton since 1977 and is widely recognized as a community leader in health care and human rights. As Jason Markusoff points out, Lakhani also happens to have a long history of donating to the Liberal Party of Canada (and, in 2015, to her local Tory MP, Matt Jeneroux).

Defence Minister Harjit Sajjan tweeted a close-up photo of his desk in the House of Commons, an unremarkable snapshot save for one tiny detail: Sajjan’s nameplate is affixed by a Robertson screw, which fellow patriots will know is a Canadian invention. The fastener’s manufacturer, founded by the late inventor P.L. Robertson, is still headquartered in Burlington, Ont. But its Canadian-ness has diluted somewhat since those early days. Robertson is now owned by Marmon Holdings, itself a subsidiary of Warren Buffett’s Berkshire Hathaway—a multinational giant with the ugliest website on the internet.

Canada Day may have gone virtual this year, but the dominion carillonneur will still play two shows with the Peace Tower’s massive bells. An array of demonstrators who plan to hang out on the Hill might be the largest audience.

Your morning smile: Scott Brison, formerly of Liberal cabinets and now of BMO Capital Markets, saved a “franken-tree” in front of his home in Cheverie, N.S.