Paul Wells: This coronavirus crisis is teaching us about shocks to the spirit. But it should also be a lesson in what we are well rid of. 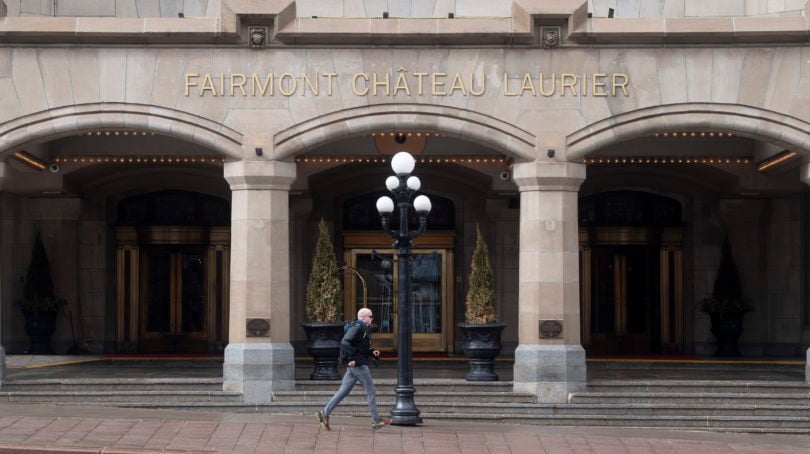 A man jogs past the Chateau Laurier hotel in Ottawa on March 20, 2020 (CP/Adrian Wyld)

How’s the digital economy working for you so far?

We’ve been hearing forever that instant communication would render everything else obsolete. Here’s futurist Don Tapscott quoting management guru Peter Drucker from 1998 to the effect that, in 30 years, big universities would be “relics.” And here they are, eight years ahead of schedule, the campuses shuttered, the students scattered. We’re no longer gathering to worship, dine, learn, protest, sweat or party. Electrons have replaced it all. It wasn’t on the agenda for this year. It won’t last, though it will surely last longer than we want it to, at terrible cost.

What we’re learning, because it’s been taken from us, is the value of being there. The value of being face-to-face. “A lot of our consumption nowadays can be called social, by which I mean doing things that bring you into contact with other people—things like going to the pub, to restaurants, to football matches or travel,” the British economist Simon Wren-Lewis  wrote in March, summarizing a paper he wrote 10 years ago about the economic cost of an epidemic. “If people start worrying about getting the disease sufficiently to cut back on this social consumption, the economic impact will be more severe” than most of the more obvious shocks to an economy.

But most of us are also learning about the shocks to the spirit. This epidemic is making us lonely.

It’s possible to overstate this. Living in Ottawa this month with steady work and no fever has to count as easy living by almost any standard. From day to day, it’s often been quite pleasant. In my neighbourhood, usually tucked too far out of the way to get much pedestrian traffic, it seems just about everyone’s out for a stroll at some point during the day. The weather’s mild, and from a carefully-maintained distance, people chat. The other day I spotted Jean Chrétien out walking, accompanied by a retired career diplomat. Separated by the bulk of my car and some empty space, we chatted about his younger brother Michel’s efforts to organize a clinical trial for an antiviral drug in China.

But such pleasant moments don’t fill an emptiness many of us feel. I’m lucky to have friends in the arts, especially musicians. It was obvious this crisis would be hard on them. In a gig economy with no gigs, livelihoods are endangered quickly. But the spiritual cost quickly made itself felt too. Creators want to create, audiences want to attend, cooks need feedback, profs need eye contact.

“Art is about one thing,” the opera director Peter Sellars said in a 2018 talk at Houston’s Rothko Chapel. “It’s about shared space. We are sharing this space. That is the point. Any performance is human beings sharing space.” It sounds a bit cosmic—fans of Sellars’ work will be familiar with this feeling—until the right to share space is taken from us, or put in abeyance indefinitely. We can see fine, we hear well, the internet makes us excellent spectators. But that’s not the same as being present at the creation. I hope when all of this is over, we’ll remember what life without that feeling was like, and we’ll appreciate it at something closer to its right value.

Meanwhile every day brings something new and astonishing. On Monday the Ontario government urged people to stay away from bars; on Tuesday it shut the bars. On Tuesday the Trudeau government shut the border, except to Americans. On Wednesday it added the Americans.

As the weekend neared, the gap between the U.S. rate of known infection and the Canadian rate must have become preoccupying, because on Friday the Prime Minister announced a deal with the U.S. to send cross-border migrants back from whence they came. The deal at the Americans’ northern border is, transparently, a pretext for a deal at the southern border, for the Americans to send Mexicans back to Mexico. Much of our politics in 2018 was about the Trudeau government calling Doug Ford’s Ontario government names for even asking about the cost of resettling migrants. Now it’s agreed the cost is higher than governments want to bear. The prospect of a hanging concentrates the mind, as Samuel Johnson wrote.

This may sound like point-scoring and politics. I don’t mean it that way, and I apologize for the impression. My argument is not that Trudeau was wrong in 2018, but that so far in 2020, we are all learning to distinguish really quickly between our preferences and what’s needed. In every Canadian government I’ve seen, the learning has been swift. Last weekend Trudeau’s cabinet had a really bad afternoon, capping several days of drift at federally-run airports. The reaction of several provinces was extraordinary: In Alberta, Nova Scotia and Quebec, provincial or municipal authorities sent staff to airports to, in effect, annex the federal jurisdiction over border control. The feds adjusted quickly. This week communication was tighter, ministers who never find anything useful to say were scarce, and I think fewer Canadians have a quarrel with their federal government this week than last. Even though the situation is markedly more dire. Even though the number of Canadian cases has quintupled in a week.

But laying credit or blame at the door of any government, unless it is led by a particularly stubborn idiot, misses part of the point. In a diffuse emergency, decentralized government is more of an asset than a hindrance. Residents of most provinces have learned to rely on their public-health officers, briefing the TV cameras daily, for facts and counsel. Good ideas are quickly stolen between jurisdictions, bad ones quickly corrected. Quebec premier François Legault turns out to have a knack for public communication; he’s conscripted TV news anchor Bernard Derome and comedian Dominique Michel, heroes of the blue-rinse set, to urge elderly Quebecers to take this all seriously. We are mostly governed by good people, and there is simply no time for their worst instincts, and most of them get that without having to be told.

Politics, in the cheapest sense, is one social activity we’re well rid of. What’s coming will be hard enough without it. And when the worst of the crisis is past, the blaming and point-scoring, the competitive claims of higher morality will come rushing back. They always do: the shocks of the 21st century have engendered suspicion and worry more lasting than the moments of solidarity they inspired. 9/11 and the 2008 financial crisis and the fake-news election of 2016 have dealt one body blow after another to trust and social cohesion. One way to fight back, when that starts to happen yet again, will be to remember how we felt when we were alone. How we swore we wouldn’t let that feeling last.