Hint to strategists: Canadians are looking for a government

Paul Wells: In recent federal elections, the winning side was the one that offered benefits. The losers tried to run on values. 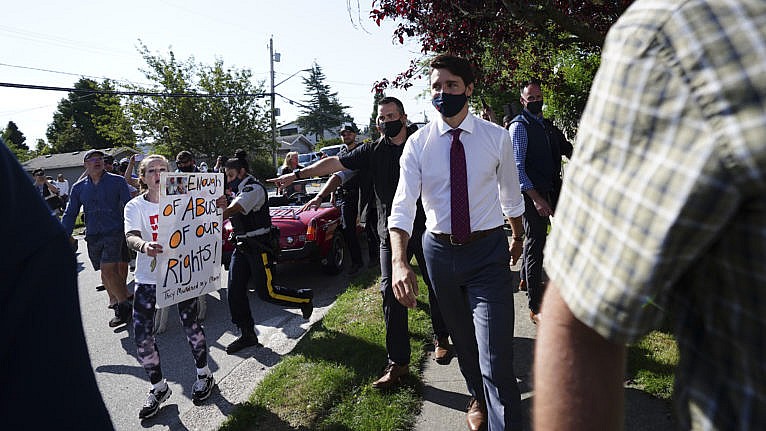 A protester yells at Trudeau as he makes his way to a motorcade in Surrey, B.C., on Aug 25, 2021 (Sean Kilpatrick/CP)

Sunday was probably the worst day of the campaign for Erin O’Toole, though not for the reasons you’d suspect if you spent the weekend following Liberal emeritus strategists on Twitter. The strategists are terribly excited about angry protesters at Justin Trudeau’s events. Meanwhile O’Toole ran into difficulty in the relatively genteel confines of a Radio-Canada studio in Montreal, where three of the network’s anchors pressed him for half an hour on how he would govern.

Taking such questions is hard to do in French if you mostly grew up near Toronto. O’Toole came well-prepped and stayed good-humoured, but his answers were mostly selected from a decent array of prepared lines. He delivered these well enough, but you can only repeat “J’ai un plan” so many times before people start to giggle.

Worse, he didn’t have clear answers to big obvious questions. Trudeau has already agreed to send $6 billion to Quebec as its share of a daycare plan the Liberals are setting up nationwide. And since Quebec has had a subsidized daycare network for 25 years, the province didn’t even have to promise to do anything new to get the money. In cancelling the Liberal plan so a Conservative government could send larger cheques to parents to use as they please, would O’Toole cancel the $6 billion payment to Quebec? It’s an obvious question. It gets you, pretty quickly, past the relative merits of the two parties’ philosophies on child rearing to something simpler and more pointed: are we getting the $6 billion or not? I’m no closer to knowing the answer for having watched O’Toole try to answer, or to get around answering, for several minutes.

And there were also questions about his candidate Cheryl Gallant, who for 21 years has been unstoppable as the party’s nominee, and consistently as the MP, in Renfrew — Nipissing — Pembroke. Apparently Gallant’s latest brainstorm is that “climate lockdowns” will follow COVID lockdowns. This lands her the coveted double word score in Paranoid Scrabble, although to ring the trifecta she’d have to include something about vaping. Do your candidates agree that climate change is a thing? “They agree with my plan,” he said. Even in translation it’s easy to spot the dodge.

I think O’Toole is reaping the rewards of a solid campaign. The polls say contradictory things, so I’ll cite only the little-noted number in Nanos’s polls, which ask whether respondents would ever consider voting for this party or that. For the longest time, the Conservative voter universe was much smaller than the Liberals’. On May 11, for instance, 54 per cent said they’d consider voting Liberal, but only 42 per cent would consider voting Conservative. Today it’s 43 per cent Conservative to 42.6 per cent Liberal—basically a tie. That’s a hell of a lot bigger problem for the Liberals than anti-vaxx tailgate parties around southern Ontario.

But it’s also, naturally and properly, going to lead to closer scrutiny of the Conservatives. All of them. Who gets into an O’Toole cabinet? What are the prospects of, say, Kerry-Lynne Findlay and John Brassard, who seem to have spent at least part of 2020 believing Chrystia Freeland is remote-controlled by Hungarian billionaire George Soros? And even if solid people with a minimum of loopy theories get into cabinet, does their platform make sense when applied in a real world? What happens to that $6 billion for Quebec, or the daycare spaces for many others, or the truly hinky climate plan that would increase benefits to people who burn more carbon?

I don’t know whether O’Toole loses this argument. (Everybody’s platform is always at least partly terrible. The climate plan Trudeau actually ran on in 2015, as written, made no sense. He won anyway and discarded his bad policy for one that worked better.) I know only that the second half of the campaign will be harder than the first.

What I also know is that Canadians aren’t likely to choose a government based on who’s at protests. A bunch of angry people have been driving around, shouting at or near the Liberal leader. This has caused several career Liberals to decide the protests are (a) unacceptable (b) organized by political opponents (c) the sort of thing that can form that most cherished of tactical assets, a “wedge,” with Justin Trudeau on one side and… his political opponents, who also decry the protests… on the other?

From where I’m sitting that’s a lousy wedge. If you’re a little less narrowly focussed than the people who used to run Liberal campaigns are, you might notice a few things about these protests. One, they’re a truly global phenomenon. In Paris and Berlin, Dublin and Amsterdam, Melbourne and Brasilia, and in dozens of other locales, restrictions ordered by public authorities in the fight against COVID-19 have become the object of protests, usually peaceful, usually spontaneous, sometimes instrumentalized by extremists.

Why so many protests? Modern politics, especially in rich countries, is usually about benefits: different parties compete with ideas for making voters’ lives easier. If you don’t qualify for a benefit, it’s unpleasant. It may even deepen desperation. But it usually doesn’t feel like government is trying to control your life. Only much more rarely is politics about obligations or restrictions: things you must do or are not permitted to do. Obligations and restrictions are a more direct intrusion by government into your choices. Reactions will vary, but they can be more visceral and emotional.

The closer a new mandate gets to the way people live, the worse some of them will take it. Many of the recent protests, for instance in France, were a direct response to the imposition of new vaccine mandates. And France didn’t even call an election two days after announcing its mandate. Trudeau did. Which means he followed the sort of announcement that has often resulted in angry protests elsewhere with a handy series of opportunities to meet and confront the guy who made the announcement.

Now Trudeau is getting free advice, tossed over the Twitter transom from earlier generations of Liberal strategists, to run against the protests, just as he got free advice tossed over the Globe transom to run on the vaccine mandates. One day, maybe soon, we’ll discuss why he seems to need so much advice. I’m left thinking about previous campaigns in which one side was offering benefits and the other tried to run on values.

In 2004 Paul Martin’s Liberals were so hot to run on “Choose Your Canada” that, on the day Martin released his platform, he came out later in the day to speculate about Stephen Harper’s views on abortion. Guess whose platform didn’t get much coverage.  That campaign ended a decade of Liberal majorities. Seventeen months later Harper ran on a lower GST and shorter health-care wait times. (He’d end up delivering on one of those.) Martin ran on—take a deep breath—a constitutional amendment to limit the federal government’s ability to use the “notwithstanding” clause to protect against abortion restrictions that Harper never ended up introducing.

By 2015 Harper had forgotten his own best lessons and ran an angry, scared “values” campaign against people who look and dress in ways Harper didn’t like, a snitch-on-your-neighbours campaign. Trudeau ran on infrastructure and electoral reform. (He ended up delivering on one of those.) The point of “sunny ways” in 2015 was that the Liberals were offering Canadians a chance to get past values tests. Justin Trudeau in 2015 offered a liberal alternative, small-l. A live-your-life-and-we’ll-see-if-we-can-help alternative. Justin Trudeau in 2021 is being counselled to administer a Liberal test of correct thought. Even a lot of people who’d pass the test will not agree with any government’s right to administer it.

O’Toole’s weakness is that he is trying to sell a benefits platform but he leads a values caucus, and he has valid doubts about whether he can sell their values. The prospects for a Conservative government’s competence and cohesion are worth asking. When three people asked O’Toole about them on Sunday, his answers weren’t great. Trudeau’s weakness is that he often doesn’t seem particularly interested in governing, at least not if anyone will say a word against him. His first response to the pandemic was to seek a blank cheque to spend however he liked for two years. His MPs filibustered committees. He prorogued Parliament. He hesitated longer than any province and most peer nations before bringing in a budget. Then he called an election. That’s a shaky record. It suggests somebody who’s easily distracted. I don’t know how he’d help his cause by confirming those suspicions.