How a new Centre Block rose, a century ago, from Parliament’s ashes

Though a fire destroyed Centre Block 100 years ago, its replacement—designed by an enigmatic architect—gave us the Peace Tower and its mysterious treasures 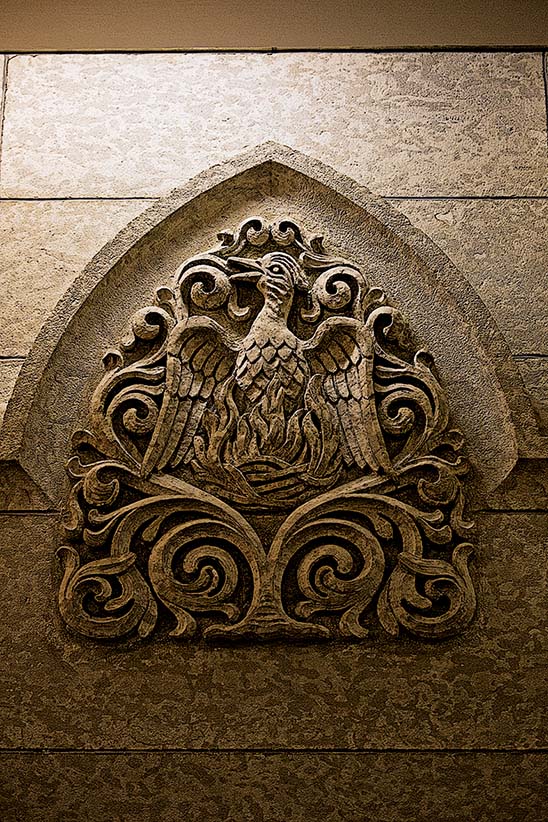 A carving of a phoenix above the Prime Minister’s Centre Block office door. (Photograph by Carla Antonio)

Above the door to the Prime Minister’s third-floor office on Parliament Hill, a phoenix rises triumphantly from flames. It’s a striking piece of craftsmanship, but easy enough to overlook in the Centre Block of the Parliament Buildings, where the grey limestone interior is elaborately carved at every turn with figures from heraldry, nature and history.

This week, though, the bird reborn from fire demands special attention. It is a meaningful symbol. A century ago, on Feb. 3, 1916, fire destroyed the original Parliament building. After the charred rubble was cleared, the new Centre Block rose in its place, complete with its iconic Peace Tower—arguably the most widely recognized landmark made by human hands in Canada.

Despite the affection many Canadians feel for the building at the centre of their democracy, its story hasn’t found a secure place in national lore. Surprisingly little is known about John Pearson, the architect whose vision shaped Centre Block down to its smallest details. Still, at least Johanna Mizgala, the curator of the House of Commons heritage collection, is smitten. “Every day when I walk into the building, I see something new,” she says, “and I fall a little bit more intellectually in love with Pearson.”

Related: The real identity of Pearson’s master of plaster 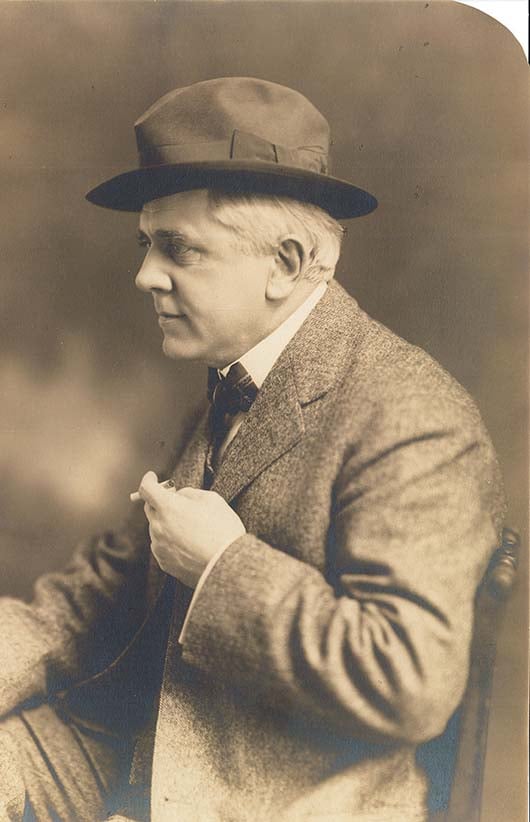 John Andrew Pearson was born in England in 1867 and immigrated to Canada in 1888. He joined the firm of Frank Darling, an influential Toronto architect, and they went on to design important banks, houses and institutional buildings, though none as significant as Pearson’s Centre Block. Darling rates a long entry in the Dictionary of Canadian Biography, but Pearson, so far, none at all.

Mizgala says the destruction of Pearson’s personal papers in an office fire late in his life left huge gaps researchers haven’t yet filled in. Not only is there no Pearson biography, she says there has been no significant scholarly research completed into his life and work. His masterpiece, however, is not being neglected: Centre Block is scheduled to be emptied in 2018, sending the House to sit next door in the West Block, for at least a decade of extensive “rehabilitation,” including earthquake-proofing and new plumbing and electrical systems, all expected to cost hundreds of millions.

Mizgala’s job makes her responsible for preserving thousands of objects and design elements found on the Hill—from paintings to furniture to ornate plasterwork—and researching them. The 1916 fire looms over her work. The original Parliament building, officially opened in 1866, was celebrated from the outset as a superb interpretation of the era’s Gothic revival style. Fifty years later, fire somehow broke out in the building’s reading room, not far from the House of Commons chamber. One theory is that a lit cigar was flipped into a wastebasket. 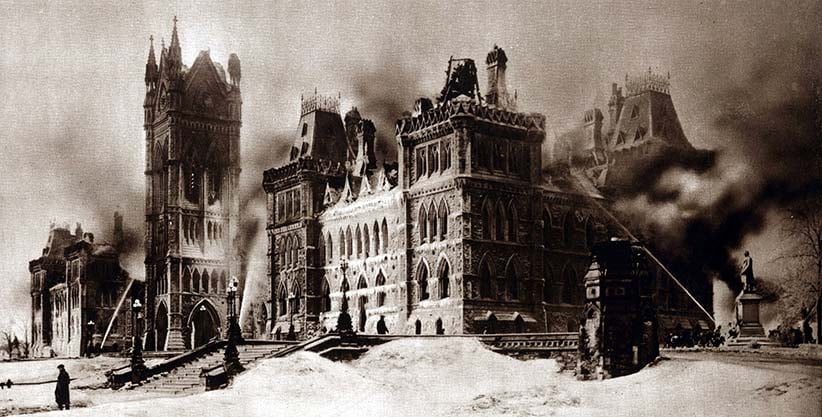 The Parliament buildings in Ottawa the morning after the Great Fire of 1916. Ottawa, Canada. Image first published in The New York Times, Feb. 13, 1916 issue. (Underwood and Underwood, N.Y.)

The reading room was well stocked with newspapers, draped over wood dowels. Its pine panelling was freshly oiled and varnished that day. The blaze spread quickly, leaping through a skylight to the roof. It burned through the night. Iron doors separated the main building from the glorious Library of Parliament, which was thus spared, along with the nearby East and West blocks.

Those surviving buildings represent a priceless legacy of the Confederation-era parliamentary precinct. And the new Centre Block, with its pointed Gothic arches and copper roofs, was designed to blend in. On a deeper level, though, Mizgala says the Centre Block captures the early-20th-century mood of a young country, at war when its construction began, and a feeling that it was coming of age.

By today’s standards, the design and building went quickly. Immediately after the fire, Pearson was hired, along with Montreal architect Jean-Omer Marchand, to survey the ruins. They quickly ruled out merely rebuilding a replica of the old two-storey building. Instead, they proposed a modern concept, using steel-frame construction and load-bearing concrete, and adding a floor to expand the office space. The new Centre Block opened in 1922, with the Peace Tower finished in 1927.

But up-to-date engineering was far from the architects’ only preoccupation. They decided on a cleaner, more modern plan than the original. Marchand played a key role in setting in place that symmetrical concept, but then he stepped back, Mizgala says, into the role of “sounding board and consultant” to Pearson. It was the Toronto architect who obsessively elaborated on the original vision and executed it.

A central corridor—running from the main entrance under the Peace Tower at the front to the Library of Parliament at the back—divides the building neatly in two. The Senate is on the east side, the House on the west. A good place to get a sense of the orderly layout is midway between the legislative chambers, in the two-storey Confederation Hall, where a central column draws a visitor’s eye upward to vaulted ceilings, accented by intricate stone carving.

But Mizgala urges a visitor to look down, too. “On the floor you have this incredible reference to the building as a kind of ship of state,” she says. At the foot of that main column is a carving of Poseidon, Greek god of the sea, and the coloured marble of the floor around him forms a compass, surrounded by bands representing the sea, land and universe. “The idea was that if the sea was rough, there was still a calm within the ship,” Mizgala says.

Pearson continued that ship-of-state theme to other corners of his Centre Block. For instance, the office he designed for the prime minister—the one with that phoenix over its door—features a plaster ceiling, intricately carved with fanciful sea creatures and portraits of explorers, like John Cabot and Christopher Columbus. He wanted the prime minister to be associated with trustworthy captains and good navigators.

Mizgala says the prime minister’s office is only one of about 40 special rooms for which Pearson paid close attention to the details of decoration, and custom-designed furniture like chairs and desks. But the official Opposition leader’s office, a floor below the prime minister’s, is more special than most.

Sir Robert Borden was prime minister at the time of the 1916 fire, and launched the work of designing and building the new Centre Block. When William Lyon Mackenzie King became Liberal leader in 1919, he took special interest in the project. He consulted extensively with Pearson about the office he would occupy as official Opposition leader, and decided to remain in it rather than trading up after he became prime minister in 1921.

Mizgala says King’s office has a “mid-to-late-17th-century feel,” in keeping with Pearson’s scheme for various Centre Block rooms to echo different periods in history. “So it’s very intricately designed. Incredible oak woodwork. Teak and ebony floor,” she says. “And then, on the walls, there are frescoes.” The murals depict scenes of knights in armour, with different panels representing leadership virtues like wisdom and justice. In King’s diaries, Mizgala says, he mentions asking Pearson to have his late mother represented. Her face is strongly believed to have been the model for an angel appearing to a knight in a vision. King’s closeness to his mother has often been satirized, but Mizgala doesn’t laugh, noting that King’s sister had died in 1915; his mother in 1917. “There’s a natural [tendency], if you’re having an influence on the space, to sort of personalize it in that way,” she says.

Fine points like the angel’s face in the Opposition leader’s office and the nautically themed plasterwork in the prime minister’s are rarely glimpsed by the public. But Mizgala says they are part of a unified vision carried through into the main public spaces, like the Confederation Hall, or the House chamber itself, with its stained glass and painted linen ceiling. Pearson chose mainly Canadian stone and wood throughout.

Decorative elements were designed to inspire those elected to serve, and Pearson intentionally left blank spaces in the Tyndall limestone, quarried in Manitoba, for future stone carvers to fill with images from Canada in the decades to come, a tradition that still continues. 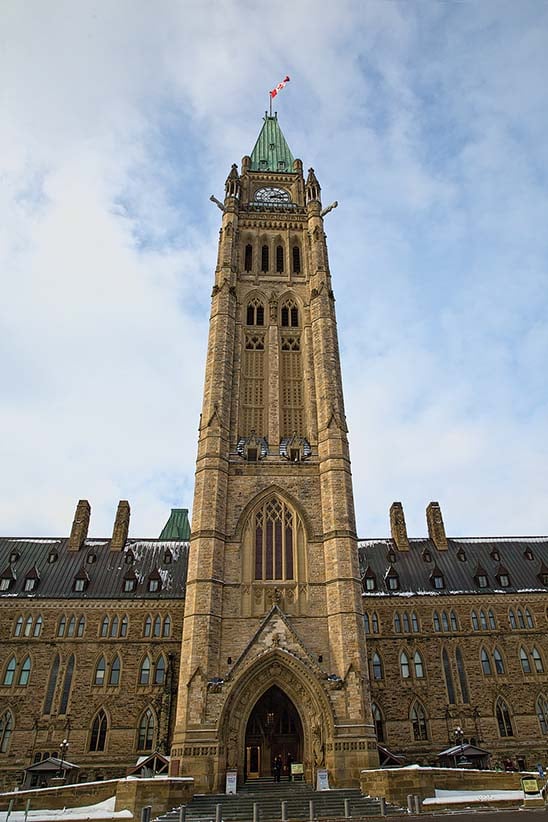 The Peace Tower stands apart, though, quite literally, having been completed last and positioned a few steps in front of the main building. It is Pearson’s expression of gratitude for peace after the horror of the First World War. Its heart is an interior memorial chamber, a shrine to the war dead.

But, in a poignant 1927 letter to King, Pearson focuses on how the tower would look as visitors approached Parliament Hill, a sight many Canadians have committed to memory.

“In all my thoughts of the tower, peace was dominant,” he wrote. “I believe there is a quiet peaceful dignity about it. I somehow bring myself to read it that way—no matter what troubles and worries and differences of opinion take place in the building. I feel that one cannot approach the building up the centre road without experiencing its mute appeal for toleration, moderation, dignity and peace.”

On what the letter reveals about Pearson, Mizgala says, “He had the soul of a poet.” She’s thought of trying to write his biography herself. Somebody should. Yet it’s not clear he would have craved an account beyond what he built, especially of course the Centre Block and the Peace Tower.

Pearson ended that letter to King by apologizing for his “unpolished” prose. Then he went on, with a touch of justified professional pride, “I would rather write in stone than on paper.”